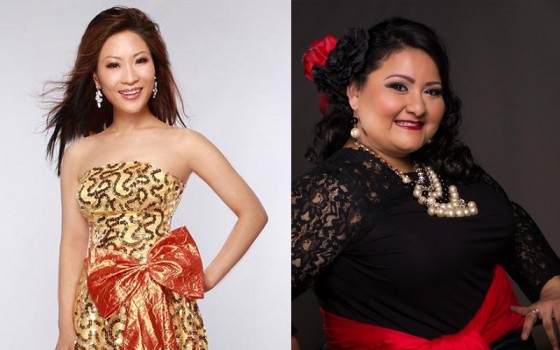 Leading up to the June 6 performance, both musicians discussed their work and careers with the Asia Society blog.

Could you tell us about your musical journeys?

Summer: I have loved music ever since I was young. It was not hard for my parents to find my talent in [music] because my mother herself was a Chinese opera singer. I was always ready to sing with the music whenever my parents turned on the radio in our house. I not only studied voice, but also took piano and dancing lessons. Growing up, I was really shy, but when I stood on a stage, I was the opposite.

Vanessa: My musical journey started in Houston's First Ward. I always loved to sing and dance and play make believe with my stuffed animals. I would line them up as my audience and sing and dance for them. I remember this well because one of my brother's friends saw me doing this in my room and made me feel dumb because he laughed at me.

My elementary school offered Mariachi classes, dance, and choir. I chose to be in the choir from around the third grade. However, I did not pick up singing Mariachi music until I went to middle school. It was my elective.

How did you first get started in your career?

Summer: I went to Singapore singing with the Singapore Composer Association from 1995, then started teaching at the Gramercy Music School, a local music academy. I benefited much from both stage performance experience and teaching. Later, I was invited to sing in Manchester, England in 2000 and had an opportunity to be coached by the respected artists Susan Dougdale and Rosemary Cahill at the Royal Northern College of Music.

I came to the United States in 2003 and completed my bachelor’s and master’s degrees in music performance at Washington State University. In order to further pursue a professional career as an opera singer, I studied with Catherine Cook, a San Francisco Opera mezzo-soprano who now serves as music chair of the San Francisco Conservatory of Music, and followed her to Houston.

Vanessa: Alfonso Guerra, my mariachi instructor from MECA, began teaching me songs in middle school such as “Los Laureles” and “Tu Solo Tu.” I was in love with Mariachi music from then on. I was building my repertoire with the different styles of mariachi music such as rancheras, sones, and huapangos. I was obsessed with Lola Beltran, Amalia Mendoza, and Lucha Villa. However, I could not sing a huapango to save my life. They were very difficult to understand rhythmically.

In 1999, I was able to compete in the Mariachi Vargas Extravaganza Vocal Competition and I sang a huapango called “La Cigarra” (The Cicada). I prepared myself for hours a day for about six weeks for this particular competition. That was during my senior year in high school, the cut off year for competing. I placed Best in the U.S. Vocalist that year. I was able to open the show for El Mejor Mariachi del Mundo, Mariachi Vargas de Tecalitlan. I feel this was the kickoff point to my career.

How has your cultural background influenced your music?

Summer: I have both Asian and Western cultural influences. As a matter of fact, my master’s thesis was about “East meets West,” studying in detail Zixin Wang, a famous Chinese composer who scientifically adopted Western voice techniques in presenting traditional Chinese arias. With this background, I enlarged my vision and increased my capability in delivering music of various cultures.

Vanessa: I was born in Houston, Texas and I love my country. I love all types of music from country to rap. I grew up listening to Patsy Cline, Tupac, and Guns N’ Roses. But there was something about throwing a grito, a scream of joy, that I just fell in love with. Holding my notes for a long measure and trying to impress my grandmother were all ideas that were suppressed in my head until I found out I could do it. I felt happy singing these rancheras, sones, and huapangos and making people happy and teary-eyed all at the same time.

Your upcoming performance at Asia Society is part of a series of programs focused on Chinese and Mexican immigration to America. What role can art (and music specifically) play in understanding the immigration experience?

Summer: Singing is the best and most efficient way to express oneself. Music can make the culture diverse and it also functions as a bridge to connect cultural differences. Music helps to build a stable and peaceful society.

Vanessa: Music is therapy for some people. The lyrics in a song — it could be the simplest song — can transport someone to their passed loved ones, their land, and their childhood memories from home. It is really important to stay connected to one’s roots and keep the culture alive in the hearts of our children to carry on. Because once we let those roots die off, we become lost in this society — a cold one, in my opinion.

What can audiences expect from the performance next week? Anything else you’d like to share with them?

Summer: The audiences should expect to hear Chinese culture and history spanning several centuries through a few representative arias and songs. This repertoire was specifically selected to highlight the spirit of the Chinese people and their evolution over the years.

Vanessa: Audiences can expect to be captivated by music full of pride in our people, land, and heritage. Don't miss this amazing show.