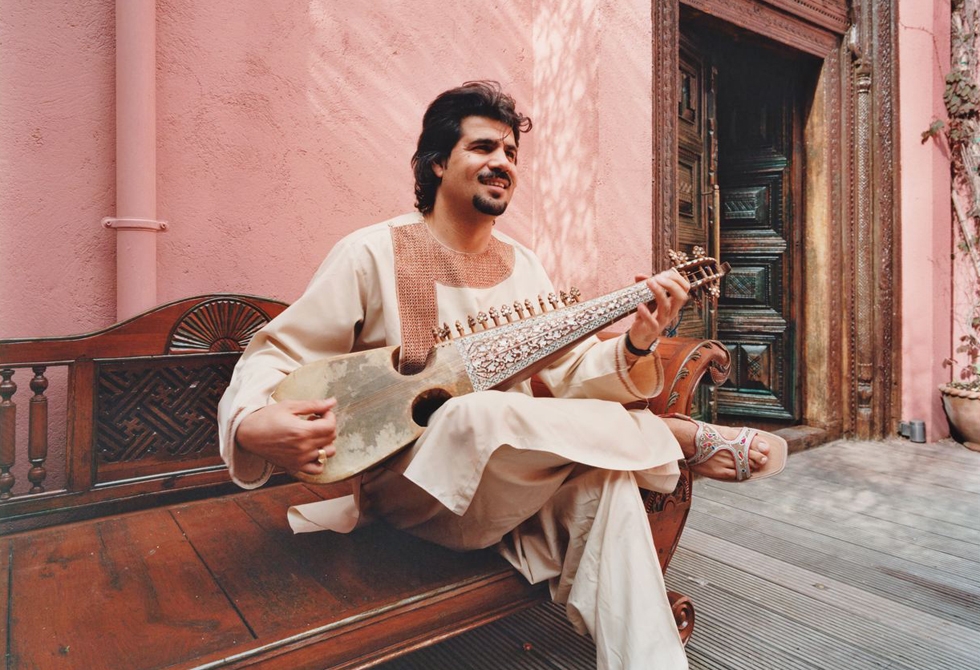 HOUSTON, September 26, 2012 — Not many people associate “peace” with Afghanistan. Usually, thoughts of war and chaos come to mind. However, Homayoun Sakhi, a California-based musician, thinks differently.

“When I think of Afghanistan, I think of peace,” says Sakhi. “Because I think of music and music to me is peace.”

This leading Afghan rubâb player was in Houston earlier this month to perform at the Voices of Afghanistan concert presented by Asia Society Texas Center. Sakhi was accompanied by the legendary Afghan singer Ustad Farida Mahwash and the Sakhi Ensemble. Together, the group created an acoustically rich experience filled with poetic ghazals (songs of love and longing), Sufi songs of devotion, and traditional folk melodies.

A 45-minute interview with Sakhi enriched my afternoon and made me ponder over Afghanistan’s rich cultural history.

Much of Afghanistan today may be shattered by the war, but the country was once vibrant with culture and at the heart of the Silk Road. Throughout history, Afghanistan has seen various invaders and conquerors who have all left behind a unique blend of cultures. Located at a central point of trade and migration, Afghanistan emerged as a regional hub of cultural and social activity and is home to a vast array of musical genres. Yes, people in Afghanistan do listen to music, even though this freedom was challenged in the past.

“It was very tough before,” says Sakhi about Afghanistan’s political conditions, “But a lot better now…people are now able to freely to listen to music.”

But this was not always the case.

Born in Kabul in 1976, Sakhi and his family experienced a challenging war climate after the Soviet invasion of 1979. At a time when music was controlled, censored, and even banned altogether, Sakhi stayed true to his music. From an early age of ten, Sakhi studied rubâb with his father, Ghulam Sakhi, in the traditional form of apprenticeship known as ustad-shagird, Persian for “master-apprentice.” In 1992, Sakhi’s musical studies were interrupted when his entire family moved to the Pakistani city of Peshawar, a place of refuge for many Afghans from political disorder and violence.

“In Peshawar, I opened a small school and introduced the Kabul style of rubâb,” says Sakhi, “I was able to pick up many different styles and techniques…there are seven notes and a thousand styles— and I like each style.”

After the fall of the Taliban in 2001, political climate in Afghanistan fairly eased. At that time, many Afghan musicians in Peshawar returned to Kabul, but Sakhi chose a different path that led him to Fremont, California. He brought with him Afghanistan’s musical tradition and the original rubâb style. As talented as he is, it is no wonder that he established himself as a leader of the local musical community in Fremont and today he is in high demand for performances, workshops, and teaching opportunities across the U.S.

“I like giving performances and sharing my music with the world,” says Sakhi. “It makes me happy to see people happy…people give me energy and music gives me peace.”

Sakhi’s journey may be unique to many living in America, but to the performers of Voices of Afghanistan this struggle is not new. Many musicians from Afghanistan have faced similar challenges in preserving their musical tradition and keeping their musical origins alive. Yet, they triumphed.

In the words of Asia Society Texas Center Director of Programs Sabrina Lynn Motley, “Voices of Afghanistan is an exquisite reminder of the tenacious presence of love that no war can ever crush.”