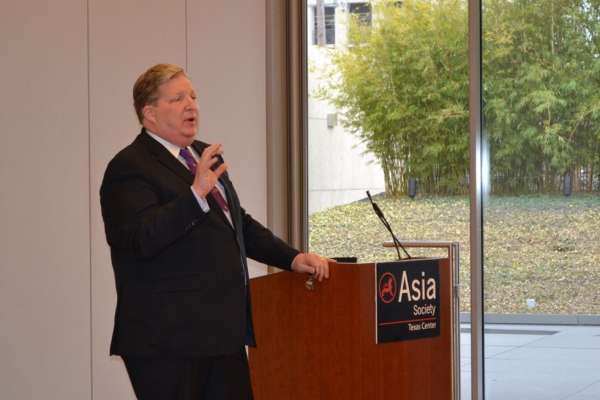 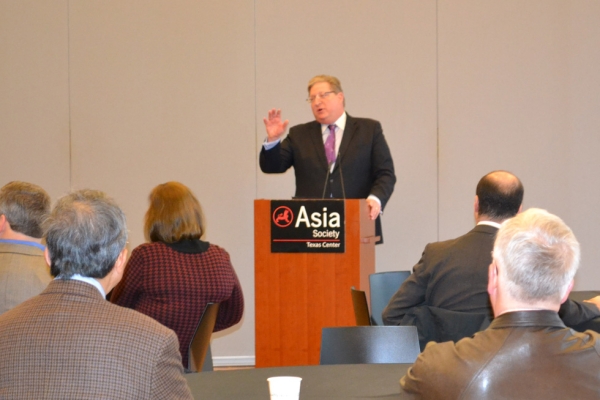 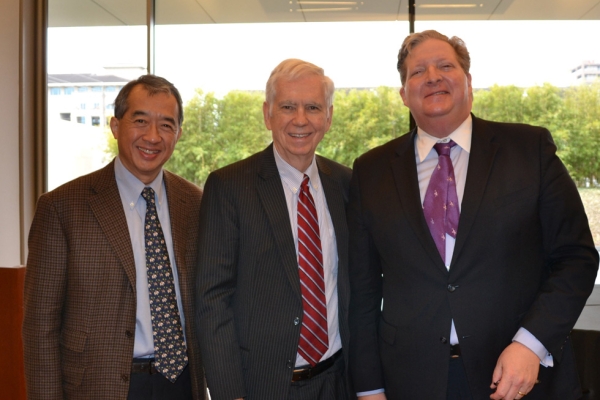 HOUSTON, February 6, 2014 — Former Deputy Assistant Secretary of State for European and Eurasian Affairs David A. Merkel visited Asia Society Texas Center to discuss the situation in Central Asia now that America is withdrawing many of its troops from Afghanistan, as well as the presidential elections taking place in that country on April 5.

Specifically, Merkel focused on the issues of democracy and security in the Central Asian nations of Kazakhstan, Kyrgyzstan, Tajikistan, Turkmenistan, and Uzbekistan.

“After September 11, following the attacks, we knew that we were going to need the right to fly over those nations, the right to land there, and the right to extract troops and special forces from there if need be,” Merkel said.

But soon after, several of those nations experienced “color rebellions” which destabilized their respective governments. When Uzbekistan offered its airbase in Khanabad to assist the U.S. in launching a military campaign shortly thereafter, our priorities shifted to that nation, Merkel said.

According to Merkel, Russia hoped to limit U.S. access and influence in Central Asia.

“Moscow was so focused on us not having a foothold in Central Asia, that we knew we needed to join with more of the other Central Asian republics, which is something we’ve tried to do since then with mixed success,” Merkel said.

According to Merkel, the current administration has taken the spotlight away from the conflicts in Central Asia when negotiating with Russia to focus on less-contentious issues.

“In his State of the Union address, President Obama did speak about leaving residual troops in Afghanistan, but the question will be whether the President will ever articulate why we were there in the first place,” Merkel said. “Many people in Afghanistan, and in Washington as well, think we won’t leave any residual forces there at all, which I hope is not the case.”

According to Merkel, one crucial event which is rapidly approaching will be critical to relations between the U.S. and Afghanistan: its Presidential elections.

“The main question is whether Hamid Karzai’s brother—who’s seen to be among the most corrupt people in Afghanistan, which is saying a lot—will come to power, and if he does you’ll have someone who is even more anti-American than Karzai,” Merkel said.

In the end, Merkel said the U.S. should focus on the process, but take a “hands-off” approach to the upcoming election.

“We should encourage the different, serious candidates that if they’re elected, they need to put representatives from the different regional and ethnic groups within their cabinets,” Merkel said. “And those different ethnic groups need to feel vested in the central government, because if that doesn’t happen, the unity of the Afghan security forces will be in question.”

Merkel also said the U.S. needs to temper its expectations of what to expect in that country.

“Central Asia is not Central Europe: we don’t have things like the NATO membership or debt forgiveness to give us leverage on asking these countries to do more in the areas of democracy and human rights,” Merkel said. “We shouldn’t be frustrated in not seeing instant progress when it comes to democracy.”

Merkel noted that over the last 10 years, the same leaders have remained in power in Central Asia.

“Of the five leaders, three are the same as when their countries first gained independence,” Merkel said. “In the future, we need to do a better job of building relationships with the next generation of leaders. They will be the leaders of the future.”