Transcendent Deities of India: The Everyday Occurrence of the Divine | Asia Society Skip to main content 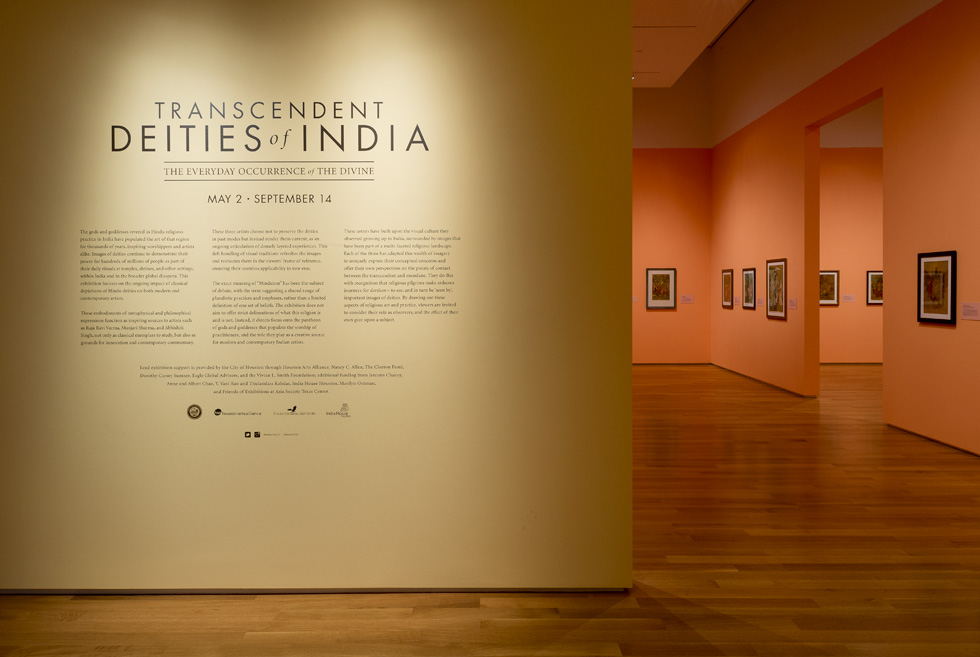 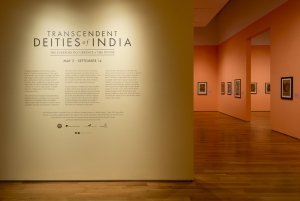 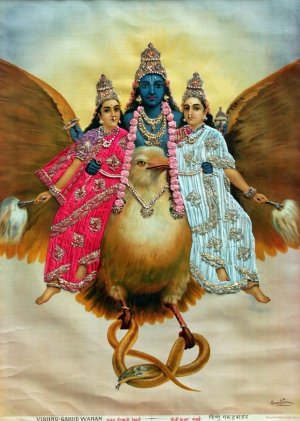 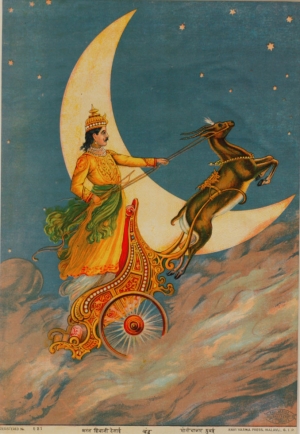 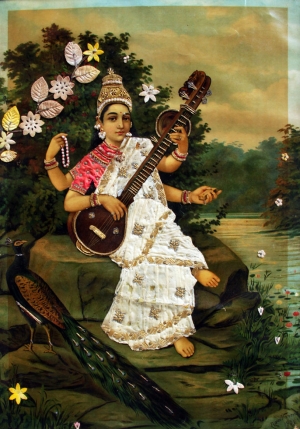 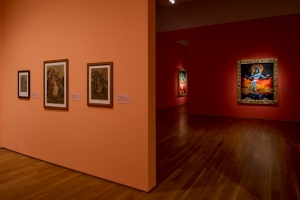 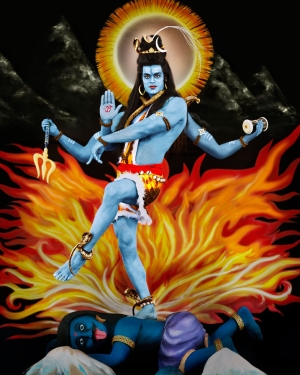 Hindu deities have been depicted in physical form for many centuries in a range of media. This exhibition features modern and contemporary representations of these gods and goddesses, which preserve the tangible connection between worshippers and the objects of their reverence. Artworks include photographs by contemporary artist Manjari Sharma, digital and drawn works from Abhishek Singh, and earlier chromolithographs from the Raja Ravi Varma Press, some of which are further embellished by the addition of fabric and zari work. Religious pilgrims frequently make arduous journeys to see, and in turn be ‘seen by’, important images of deities. By drawing out these aspects of religious art and practice in South Asia, visitors are invited to consider their role as observers, and the effect of their own gaze upon a subject.

Admission to the exhibition is free for Asia Society members, $5 for nonmembers.

HOUSTON, April 16, 2014 — Asia Society Texas Center will present a series of vibrant photographs by Brooklyn-based Indian contemporary artist Manjari Sharma, digital works and drawings by Abhishek Singh, and modern chromolithographs produced by the Raja Ravi Varma Press in an exhibition entitled Transcendent Deities of India: The Everyday Occurrence of the Divine, on view May 2 through September 14, 2014. This is the first time these artists’ works have been presented together in Texas.

The exhibition of nearly 60 images will be on view in the Louisa Stude Sarofim Gallery at the Texas Center and is funded in part by a grant from the City of Houston through Houston Arts Alliance.

“Transcendent Deities of India features Hindu gods and goddesses depicted in the less familiar formats of photography, digital, and chromolithography which demonstrates their ongoing relevance to more recent artists who utilized the technology of their eras,” said Bridget Bray, director of exhibitions, Asia Society Texas Center. “These modern and contemporary representations of the deities preserve the tangible connection between worshippers and the objects of their reverence, which has an important religious function as well as making the works visually compelling to a broader audience.” Bray notes that religious pilgrims frequently make arduous journeys to see important depictions of deities in place at temples and other settings.

“We are thrilled to bring this fascinating exhibition of Indian art to Houston,” said Bonna Kol, executive director, Asia Society Texas Center. “This is a unique opportunity to promote understanding between cultures by viewing aspects of religious art and practice in South Asia through a modern and contemporary lens.”

Raja Ravi Varma (1848–1906) was an Indian artist whose paintings are considered to be among the best examples of the fusion of Indian traditions with the techniques of European academic art. Varma's paintings became an important motif of the time, but Varma also pursued advances in the chromolithography of the era. He founded several presses to make his images more widely available, resulting in reproductions being found in homes and businesses. These works with their colors and shading were markedly different from earlier prints. In addition, they were frequently embellished with fabric and materials that further adorned the deities depicted.

Some of the Sharma works coming to the Texas Center most recently appeared as part of the artist’s Darshan exhibition at the Richard Levy Gallery in Albuquerque, NM, from March 8 to April 18, 2014. Associated with Hindu worship, darshan is a Sanskrit word meaning vision or view and refers to the experience of connection between deity and viewer. Historically, Hindu deities have been depicted predominantly through sculpture rather than Sharma’s chosen mode of photography. Multiple trips to Mumbai and collaborations with a sizable team of local artisans, sculptors, and painters resulted in lavish sets, ornate costumes, and models styled to render each of the nine elaborately-staged archetypal representations.

Abhishek Singh's art re-imagines subjects drawn from the major epic narratives of India, such as the Mahabharata and Ramayana, connecting the spiritual and the symbolic to the fantastic. Traditional subjects are newly rendered through a dynamic contemporary perspective that incorporates graphic novels and animation, reflecting his own conceptual concerns around the intersection between the temporal and the sacred. A consummate draftsman, Singh utilizes traditional images, along with modern representations such as those of Raja Ravi Varma, to demonstrate the ongoing relevance of these gods and goddesses to contemporary life. He reveres the example set by Varma of reinterpreting classical images to maintain their impact in a rapidly developing global culture.

Born in Mumbai and raised in India, Sharma was immersed in her Hindu culture as a child. In her early 20’s, she moved to the U.S. to pursue photography. Visits to Hindu temples were gradually replaced by sojourns to museums and art galleries with the same dedication. The Darshan series bridges the gap of these two separate worlds. Among her recent awards and honors, in 2013 Sharma was selected for the New York Times Portfolio Review; took honorable mention for Santa Fe Prize in 2011, as well as being nominated for PDN 30; and was a 2010 Photolucida Critical Mass Finalist and top 100 for Review Santa Fe 2010. Sharma received a Bachelor of Fine Arts from Columbus College of Art & Design, Columbus, OH, and also studied at S.V.T. College in Mumbai.

Raja Ravi Varma (1848–1906) was an Indian artist from the princely state of Travancore in southern India who achieved recognition for his depiction of scenes from the epics of the Mahabharata and Ramayana. Primarily a self-taught artist, he chose oil as his primary medium but explored other methods of production. He founded several presses to make his images more widely available, resulting in reproductions being found in almost every middle-class home. His exposure in the west grew when he won the first prize in the Vienna Art Exhibition in 1873 and is sometimes referred to as the “Father of Modern Indian Painting.”

Born in Gwalior, India in 1982, Singh is a fine artist and a graphic novelist. He is the author and artist for the acclaimed KRISHNA - A Journey Within, a 300-page omnibus, published by Image Comics, and an artist for Kali and Shiva for the India Authentic series for Virgin Comics which were collaborations with Shekhar Kapoor and Deepak Chopra, as well as Ramayana 3392 AD. Singh’s work has been exhibited at Los Angeles County Museum of Art (LACMA), Burning Man 2013, and he has presented two of his most notable shows with the Nirula Family Art Trust, New Delhi.

Exhibitions are made possible by additional funding through Friends of Exhibitions at Asia Society Texas Center, including the following contributors in addition to those listed above:

Contributors as of April 2014