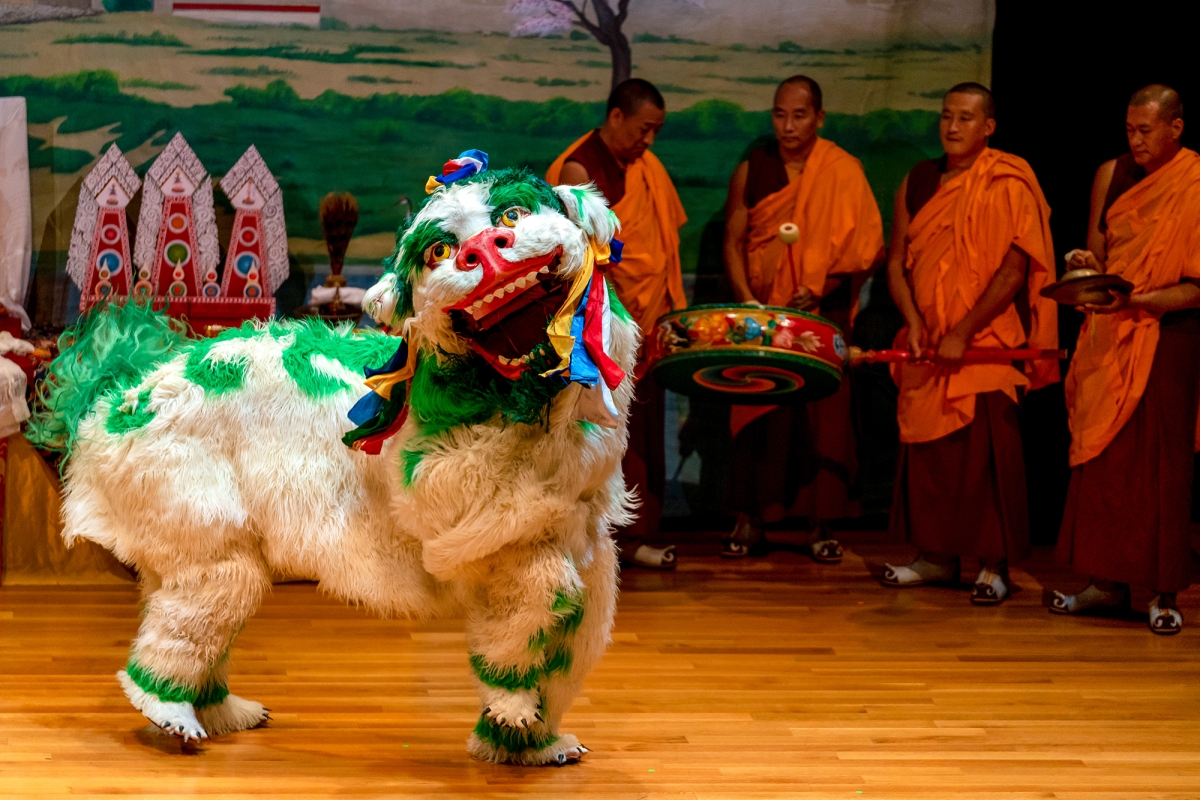 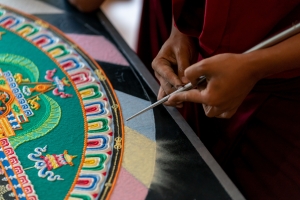 Following the last three years’ sold-out programs at Asia Society, the famed multiphonic singers of southern India's Drepung Loseling Monastery return to perform Sacred Music Sacred Dance for World Healing on Saturday, August 17. Their sellout performances in Carnegie Hall and Lincoln Center received national acclaim, and were praised as “remarkable” by The New York Times and “a universal expression of the human subconscious” by The Washington Post.

Robed in magnificent costumes and playing traditional Tibetan instruments, the Drepung Loseling monks will present ancient temple music and dance. The Loseling monks are particularly renowned for their multiphonic chanting known as zokkay (complete chord). Each of the main chantmasters simultaneously intones three notes, thus each individually creating a complete chord. They also utilize traditional instruments, such as 10-foot-long dung chen horns, drums, bells, cymbals, and gyaling trumpets. Rich brocade costumes and masked dances, such as the Dance of the Sacred Snow Lion, add to the splendor.

The monks will perform an afternoon matinee as well as an evening full-length program.

Afternoon Matinee (2-2:45 p.m.)
This shorter performance, appropriate for families, will feature a selection of the full-length program's music and dance.

Evening Program (7-8:30 p.m.)
This full-length performance has sold out the past two years.

On past tours, the monks of Drepung Loseling have performed with Kitaro, Paul Simon, Philip Glass, Edie Brickell, Natalie Merchant, Patti Smith, the Beastie Boys, and the Grateful Dead’s Mickey Hart, to name but a few.

In addition, two of their recordings achieved Top-10 listings on the New Age music charts: Tibetan Sacred Temple Music (Shining Star Productions) and Sacred Tibetan Chants (Music and Arts Program of America, Inc.). Their most recent recording, Compassion (Milennia Music), pairs the monks with the Abbey of Gethsemani Schola in an encounter of Gregorian chant with Tibetan multiphonic singing.

Following the legacy of Drepung Loseling Monastery, India, Drepung Loseling is dedicated to the study and preservation of the Tibetan Buddhist tradition of wisdom and compassion. A center for the cultivation of both heart and intellect, it provides a sanctuary for the nurturance of inner peace and kindness, community understanding, and global healing.

The Mystical Arts of Tibet tours are organized by the Drepung Loseling Monastery. Performing Arts and Culture programs are presented by Wells Fargo. Major support for Exhibitions and Performing Arts and Culture programs comes from Chinhui Juhn and Eddie Allen, Nancy C. Allen, Leslie and Brad Bucher, Dr. Ellen R. Gritz and Milton D. Rosenau, Jr., the City of Houston through Houston Arts Alliance and the Anchorage Foundation. Generous funding also provided by AARP, The Clayton Fund, Miller Theatre Advisory Board, Texas Commission on the Arts, Ann Wales, Wortham Foundation, and through contributions from the Friends of Asia Society, a dedicated group of individuals and organizations committed to bringing exceptional exhibitions and programming to Asia Society Texas Center.