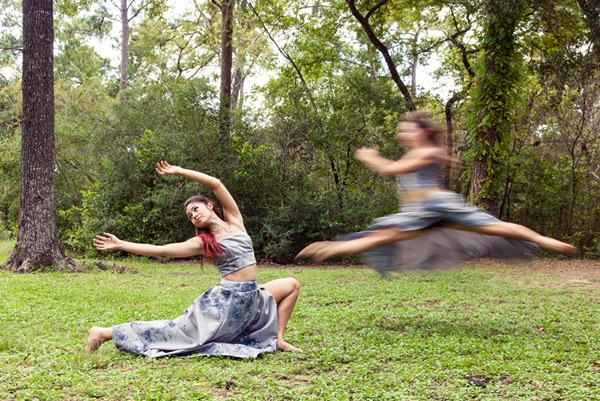 “A Frame Dance Productions engagement is more than a dance concert; it's an immersive experience that allows the audience to appreciate movement in ways that go beyond the proscenium stage.” (Houston Press)

drift is a unique exploration of sound, movement, and process. The performance features new and recent works of music and dance — composed and choreographed by Rob McClure and Lydia Hance, respectively — which center on dynamic cultural traditions through contemporary forms. The program is presented as a triple-bill:

The same program is performed each night.

Frame Dance empowers Houstonians to communicate, inspire, and connect to the world and others through movement, community and artistic collaboration, and technology. They relate the process of making dance to audiences, and develop scenarios where the audience’s presence impacts the work. Since 2010, Frame Dance has presented over 40 live, original performances in Houston with guest artist collaborators from different genres, and each performance features original musical compositions by emerging and established composers. In its series of annual films — nine to date — Frame Dance creates new experiences for audiences using technology to record and edit dance performance into dynamic video narratives that document stories that would otherwise remain unheard. In 2014, Frame Dance established the Little Framers and MultiGen Framers educational ensembles, providing dance education for ages 6-99.

Dubbed Houston’s “queen of curious locations,” Lydia Hance is the Executive and Artistic Director of Frame Dance Productions. She has been named an Emerging Leader by Dance/USA and has led Frame Dance in performances from the Galveston pier onto the METRO light rail, in the backs of U Haul trucks, downtown tunnels, and into museums, stages, and warehouses throughout Texas for the past six years. A champion of new music composers, her work deepens interdisciplinary and multigenerational collaborations, and investigates the placement of dance in our lives. She is a choreographer, curator, filmmaker, educator, and dance writer originally from the California Bay Area. She holds degrees in Dance Performance and English Literature from SMU and trained at the Taylor School, Graham School, Tisch School of the Arts, Limon Institute and SMU.

Bank of America is the presenting sponsor of performing arts and cultural programs, with generous support from the City of Houston through Houston Arts Alliance, the Hearst Foundation, and Mickey Rosenau & Dr. Ellen Gritz. Lead support is provided by the Cullen Trust for the Performing Arts, The Clayton Fund, and the Favrot Fund. Support is also provided by Friends of Performing Arts & Culture, a premier group of individuals and organizations committed to bringing the best in public programming to Houston. This program is presented in collaboration with Frame Dance Productions.