Performing "Chahar-bagh" (Four Gardens), In collaboration with Aga Khan Museum and His Highness the Aga Khan Council for the Southwestern United States 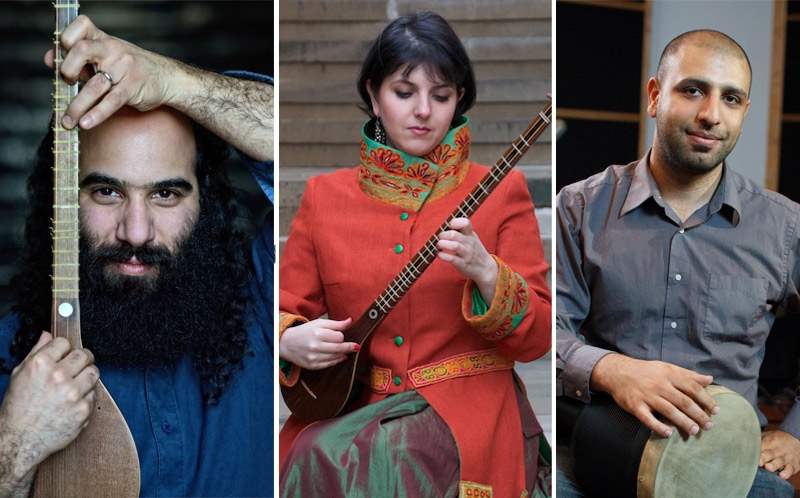 This concert is an initiatory journey into music and poetry from the Safavid era of Persian culture. Based on the latest musical researches, Kiya Tabassian, Sepideh Raissadat and Hamin Honari revisit some of the country's most beautiful musical pieces and rediscovered treasures. This performance sheds light on Persian Magham music (prior to the Dastgâh system) and builds bridges with our contemporary repertoire of Radif. New compositions and improvisations by Kiya Tabassian will also be performed. The poetry of Hafez describing the mystical life inside the gardens will lead the musicians and the audience inside this sophisticated world of Persian Chahar-bagh.

Setar virtuoso, composer and improviser, Kiya Tabassian is rooted in Persian classical music and composes for small and large ensembles around the world. His masters in setar were Reza Ghasemi and Kayhan Kalhor and in composition, Gilles Tremblay. In 1998, Tabassian founded Constantinople, a Montreal based ensemble which has earned an international reputation for its unique juxtaposition of early musical sources, contemporary aesthetics, and the living traditions of the Middle East. He has recorded 15 CDs for several labels such ATMA, Analekta, Buda Musique, World Village, and Ma Case labels and has created with Constantinople over 35 original programs performing them at some of the most prestigious festivals and venues such as Salle Pleyel (Paris), Berliner Philharmonie (Germany), Festival d'Aix-en-Provence (France), and Festival de Mexico en el Centro historico (Mexico). Over the past decade, he has staged over 800 concerts in more than 120 cities in nearly 30 different countries.

As a Persian classical vocalist and musician, Sepideh Raissadat began her recording career at the age of 18 with an album with Master Parviz Meshkatian (Konj-e Saburi, 1999). She was the first female vocalist to have a solo public performance in Iran after the 1979 revolution (Niavaran concert hall, 1999). As a child, she began studying Persian classical music with the famous Iranian Diva Parissa and later with renowned masters Parviz Meshkatian and Mohammad-Reza Lotfi. Raissadat obtained a B.A. degree in painting in Iran and holds a B.Mus degree from the University of Bologna and an MA in Ethnomusicology from the University of Toronto. Raissadat has had numerous performances in Europe and North America and has garnered many invitations by prestigious institutions, including UNESCO, the Vatican and international media such as BBC and RAI. She is currently continuing her doctoral studies in Ethnomusicology at the University of Toronto.

Hamin Honari grew up in a musical family where he was exposed to traditional Persian music at an early age. He has focused on adapting his drumming style and technique to accommodate many different genres of music. He has toured as a member of the Dastan Ensemble, one of Iran’s most well-known Persian classical music ensembles and has performed with many of Iran’s greatest musicians and singers. He currently lives in Vancouver, BC where he teaches Persian drumming. He is currently involved in projects such as the Vashaan Ensemble, Qalandar with Gordon Grdina, and Nava Hamnavazan Ensemble which recently toured with renowned Iranian singer, Salar Aghili.

Bank of America is presenting sponsor of Performing Arts & Culture programs. Generous funding also provided by AARP, Nancy C. Allen, CNOOC-NEXEN, the City of Houston through Houston Arts Alliance, The Clayton Fund, the Cullen Trust for the Performing Arts, and Mickey Rosenau & Dr. Ellen Gritz. Funding is also provided from Friends of Performing Arts & Culture at Asia Society Texas Center, a premier group of individuals and organizations committed to bringing the best in public programming to Houston. The program is presented in collaboration with Aga Khan Museum and His Highness the Aga Khan Council for the Southwestern United States.