"The Majestic Lion" of the Kabuki Theater Workshop 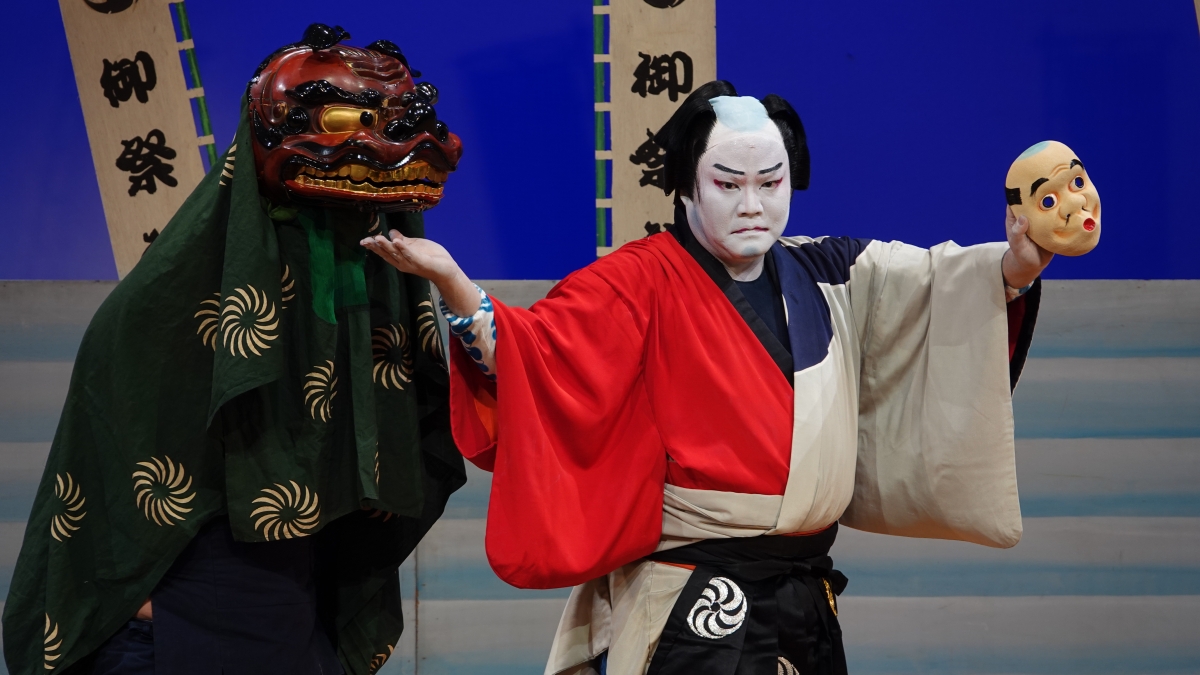 Kabuki master Nakamura Gankyō will take workshop participants on a journey through this unique Japanese theatrical style, demonstrating highlights from the dance drama Mirror Lion (Shunkyō Kagami jishi) followed by an interactive workshop. The class will be immersed in the world of Kabuki Theater, learning how to physically transform themselves into one of its actors through vocal and physical exercises.

First performed in 1893, Mirror Lion takes place during the New Year celebrations held at the Shogunate’s castle, where a young lady-in-waiting is chosen to perform a ceremonial dance using a hand held lion’s head. As she is dancing, the spirit of the head transforms the young woman into a majestic lion. According to ancient Buddhist legends, this lion acts as the guardian to the entrance of a stone bridge that connects Mount Seiryō-zan to the paradise of Bodhisattva Monjū. It protects the paradise from unworthy candidates who are not allowed to cross the bridge. In the story, the lion illustrates his power while prancing among peonies and butterflies.

Nakamura Gankyō, aka Bandō Hirohichirō, was born and raised in Southern California. He started his Nihon Buyō (Japanese Classical dance) training at the age of three from the Bandō School of Japanese Classical dance. As a young performer, Gankyō traveled throughout the United States, introducing Nihon Buyō at various Japanese festivals and other multicultural events. At the age of seventeen, Gankyō attained his masters degree from the ninth headmaster and Kabuki actor, Bandō Mitsugorō, and was awarded the name of Bandō Hiroshichirō. At the age of twenty-six, Gankyō was awarded his shihan (professor’s degree) from Bandō Mitsugorō X.

Gankyō was the first non-Japanese citizen to be accepted to a two-year training program at Shochiku Kamigata Kabuki Jyūku in Osaka for future Kansai Kabuki actors. Here, he was trained in the Japanese arts of tea ceremony, flower arrangement, sewing, koto, shamisen, narimon, Japanese history and traditional comedy telling. He was also instructed in Gidayū, Nagauta, Shodo, Nihon Buyō, and other arts by National Living Treasure Tokiwazu Ichihadaiyu. After the two years, Gankyō graduated first in his class.

Upon graduation, Gankyō was accepted to be the youngest member of the Chikamatsu-za Troop, and was apprenticed to the National Living Treasure Nakamura Ganjirō III, now Sakata Tōjūrō IV. He became the first non-Japanese citizen to be accepted into the professional ranks of Kabuki in the theater’s history. Tōjūrō award him with the name of Nakamura Gankyō (the “gan” from Ganjiro, and “kyō” from Kyoto). As a professional Kabuki actor, Gankyō has performed in all of the major Kabuki theaters throughout Japan. He has traveled internationally to England, China, Korea, India and the United States. He has held workshops, demonstrations, and lectures, and also accompanied his master Tōjūrō on various performances in those countries. While working in the television and film industry, he was awarded his PhD in Japanese Literature from UCLA in the Department of Asian Languages and Cultures and was chosen as a Fulbright Scholar for 2013-2015 as a Researching Scholar at Waseda University and Tokyo University. In addition, under his group Bandō Ryū: “Kyō no Kai” he teaches Japanese classical dance throughout California and New York, and is the youngest chosen official representative of the Bandō School of Japanese Classical Dance (headquartered in Tokyo, Japan) to the United States.

Performing Arts and Culture programs are presented by Wells Fargo. The Japan Series at Asia Society Texas Center is presented by Mitsubishi Corporation (Americas). Major support for Performing Arts programs comes from Nancy C. Allen, Chinhui Juhn and Eddie Allen, Ellen Gritz and Milton Rosenau, the City of Houston through Houston Arts Alliance, The Hearst Foundation, The Brown Foundation, Mary Lawrence Porter, Houston Endowment, and the Anchorage Foundation of Texas. Generous funding also provided by AARP, The Clayton Fund, The Cullen Trust for the Performing Arts, Miller Theatre Advisory Board. Additional support provided by the Wortham Foundation, Texas Commission on the Arts, National Endowment for the Arts, The Japan Foundation, and through contributions from the Friends of Asia Society, a dedicated group of individuals and organizations committed to bringing exceptional programming and exhibitions to Asia Society Texas Center.