From Japanese Internment to "Travel Bans": A Discussion and Film Screening of "And Then They Came for Us" [SOLD OUT] | Asia Society Skip to main content

From Japanese Internment to "Travel Bans": A Discussion and Film Screening of "And Then They Came for Us" [SOLD OUT]

In collaboration with the Asian American Bar Association of Houston 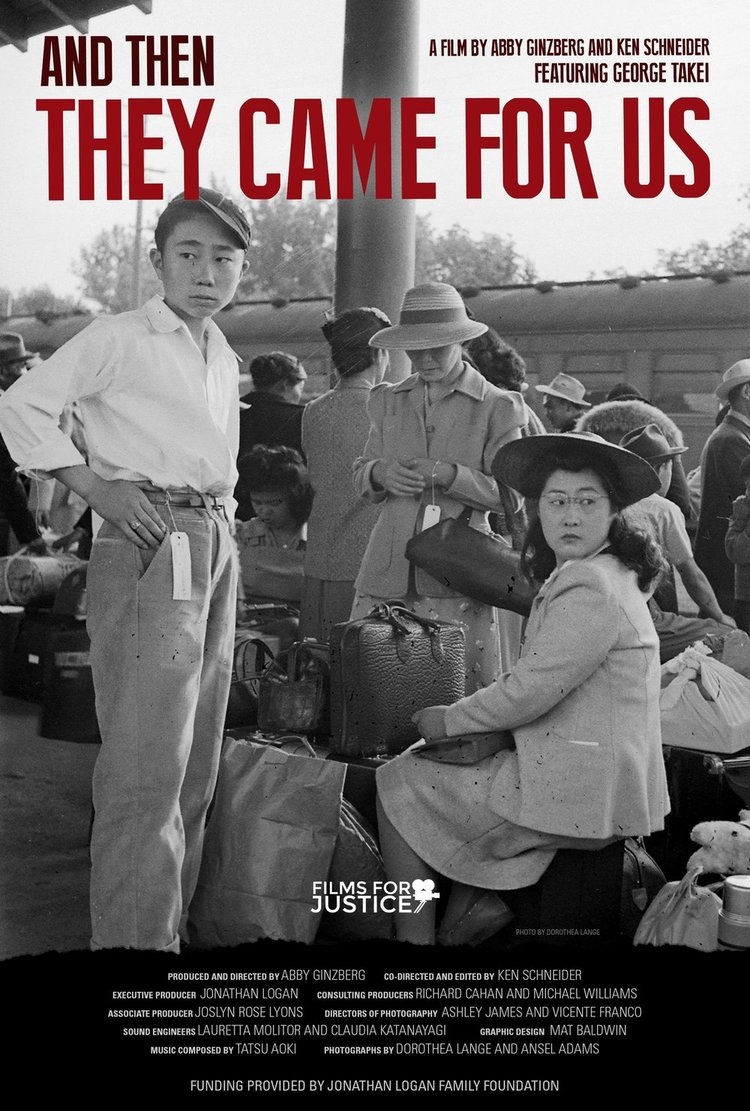 This event has been sold out. Tickets will not be available at the door.

The documentary And Then They Came for Us seeks to educate audiences about the cultural and political environment that ultimately enabled the internment of Japanese and Japanese-American residents during World War II. While President Franklin D. Roosevelt's Executive Order 9066 is now widely recognized as the catalyst for the violation of Japanese Americans' constitutional rights, the film focuses on the cumulative factors that led to the rule of law to be bent in the name of patriotism and national security. Featuring prominent survivors of internment and the advocates who worked to vindicate their rights, the filmmakers "bring history into the present" by drawing parallels to the current risk that another constitutional crisis may occur if a vulnerable community becomes the target of cultural skepticism — specifically, the Muslim community affected by Executive Order 13769, known as the "travel ban."

Following the film, a panel of legal experts and community leaders will provide unique insights into the impact of Japanese internment and how our country may avoid another such crisis. The panel of diverse perspectives will be anchored by the attendance of Fred Korematsu's daughter, Karen Korematsu, and one of his attorneys, Don Tamaki. Mr. Korematsu was the named plaintiff in the landmark Supreme Court case Korematsu v. United States of America, now universally understood to be the incorrectly-decided ruling that upheld President Roosevelt's internment order, even in the absence of evidence that the Japanese community was a threat to U.S. national security.

Join Asia Society Texas Center and the Asian American Bar Association of Houston for an insightful discussion, with the hope that diverse community members will learn how they can support one another in preventing history from repeating itself.

Seventy-five years ago, Executive Order 9066 paved the way to the profound violation of constitutional rights that resulted in the forced incarceration of 120,000 Japanese Americans. Featuring George Takei and many others who were incarcerated, as well as newly discovered photographs by Dorothea Lange, And Then They Came for Us brings history into the present, retelling this difficult story and following Japanese American activists as they speak out against the Muslim registry and travel ban. Knowing our history is the first step to ensuring we do not repeat it. And Then They Came for Us is a cautionary and inspiring tale.

Karen Korematsu is the Founder and Executive Director of the Fred T. Korematsu Institute and the daughter of the late Fred T. Korematsu. In 2009, on the 25th anniversary of the reversal of Fred’s WWII U.S. Supreme Court conviction, Karen established the Fred T. Korematsu Institute. Since her father’s passing in 2005, Karen has carried on Fred’s legacy as a civil rights advocate, public speaker and public educator. She shares her passion for social justice and education at K-12 public and private schools, colleges and universities, law schools, teachers’ conferences and organizations across the country. One of Karen’s most significant accomplishments was working with Assembly Member Warren Furutani to successfully establish in 2011 a perpetual “Fred Korematsu Day of Civil Liberties and the Constitution” for the state of California on January 30. Fred Korematsu is the first Asian American in U.S. history who has been honored with a statewide day. Karen’s work, and her father’s legacy, extends to advocating for civil liberties for all communities, and she addresses current issues that draw lessons from the past. She has signed on to amicus briefs in several cases opposing violations of constitutional rights arising after 9/11, including in Odah v. United States, Turkman v. Ashcroft, Hedges v. Obama, and Hassan v. City of New York. She authored the foreword to “Patriot Acts, Narratives of Post-9/11 Injustice” in 2011. Karen is a lead member the National Advisory Boards of both the Fred T. Korematsu Center for Law and Equality at Seattle University School of Law and the Fred T. Korematsu Professor of Law and Social Justice at the William S. Richardson School of Law, University of Hawai’i at Manoa. In 2013, she was appointed as an Advisory Member to the California Task Force on K-12 Civic Learning by the Honorable Tani G. Cantil-Sakauye, California Supreme Court Chief Justice and Chair of the Judicial Council, and Tom Torlakson, California State Superintendent of Public Instruction. She is a current board member for Asian Americans Advancing Justice-AAJC in Washington, D.C., and a former member of the Board of Directors for Marin Ballet and Asian Americans Advancing Justice-Asian Law Caucus. In 2015, Karen was invited as the first non-lawyer member of the National Asian Pacific American Bar Association (NAPABA).

Pratik Shah is the co-head of Akin Gump’s Supreme Court and appellate practice. He briefs and argues cases in federal and state appellate courts across the country, including the U.S. Supreme Court where he has argued 15 cases. Pratik recently served as lead counsel for Karen Korematsu and various civil rights organizations in the Supreme Court travel ban litigation, urging the Court to overrule the infamous Korematsu decision. Chambers describes Pratik as “one of the brightest and most personable members of the appellate bar” with “a total command of appellate issues.” Under his leadership, Akin Gump has been a mainstay on the National Law Journal’s Appellate Hot List and was named one of the top three appellate practices in the Best of Corporate Counsel rankings. Before joining Akin Gump, Pratik served for over five years as an Assistant to the Solicitor General at the U.S. Department of Justice. He received a number of awards for his advocacy before the Supreme Court during that time, including the Attorney General’s Distinguished Service Award for his role as lead drafter of the successful challenge to the Defense of Marriage Act in United States v. Windsor. Pratik has also taught constitutional law, and clerked for Justice Stephen G. Breyer on the U.S. Supreme Court and Judge William A. Fletcher on the U.S. Court of Appeals for the 9th Circuit.

Don Tamaki has for more than 40 years specialized in providing value-driven legal counsel to entrepreneurs, privately-held companies, and nonprofit corporations, with special focus on commercial leasing, personnel and employment law, corporate governance and other internal practices, licensing, acquisition, and other business transactions. In addition, Mr. Tamaki has extensive experience negotiating talent agreements and endorsement deals, representing Olympic ice skating gold medalist Kristi Yamaguchi, and various television news anchors, reporters and weather persons including Carolyn Johnson, Kristen Sze, Mike Nicco, Carolyn Tyler, Lyanne Melendez, David Louie, Matt Keller and Jonathan Bloom. For 15 years straight (2004-2018), Mr. Tamaki has been selected to Northern California Super Lawyers, and has received the highest rating for competency and ethics, AV® Preeminent™, from the Martindale-Hubble attorney directory. Representative clients include, the Straits Restaurant and Sino Restaurant chain, Konica Minolta, East Bay Pediatrics Group, the California HealthCare Foundation, the State Bar of California, the Consulate General of Japan in San Francisco, the Kristi Yamaguchi Always Dream Foundation, the Asian Pacific Fund, the Chinatown Community Development Center, the Asian and Pacific Islander American Health Forum, and Baker Places, Inc. In keeping with the firm’s tradition of community service, Mr. Tamaki served on the pro bono team that reopened the landmark Supreme Court case of Korematsu v. the United States, overturning Fred Korematsu’s conviction for refusing as an American citizen to be incarcerated on account of his racial ancestry. Mr. Tamaki is past member of the board of Glide Foundation and is the board president of the San Francisco Japantown Foundation.

Mustafa Tameez is the Founder and Managing Director of Outreach Strategists, a public affairs and communications firm, based in Houston. His long career in communications and public affairs has focused on helping clients overcome communications challenges both here and abroad. He is a subject matter expert who is frequently quoted in the New York Times, Washington Post, and Houston Chronicle, and has over 600 appearances on CNN, MSNBC, Fox News, and local stations. Mustafa also serves on the boards of Unity National Bank, the Texas Lyceum, National Immigration Forum, the American Leadership Forum, the Transportation Advocacy Group, and the ADL’s Coalition of Mutual Respect.

Sang Shin is an attorney at Foster LLP. Recognized as a Top Lawyer in Immigration Law by Houstonia Magazine, he specializes in working with employment-based and investment-related clientele whether they be multinational global corporations, midsize businesses, international companies entering the U.S. for the first time, or investors. Sang graduated from Charlotte School of Law and received his undergraduate degree from the University of North Carolina at Chapel Hill. Sang is an active member of the community, participating in organizations such as the American Immigration Lawyers Association, State Bar of Texas, the United Way, the Asian American Bar Association of Houston, the Asian American Bar Foundation, and the National Asian-Pacific American Bar Association. He is also a member of the Texas Global Business Network and the Asian Chamber of Commerce.