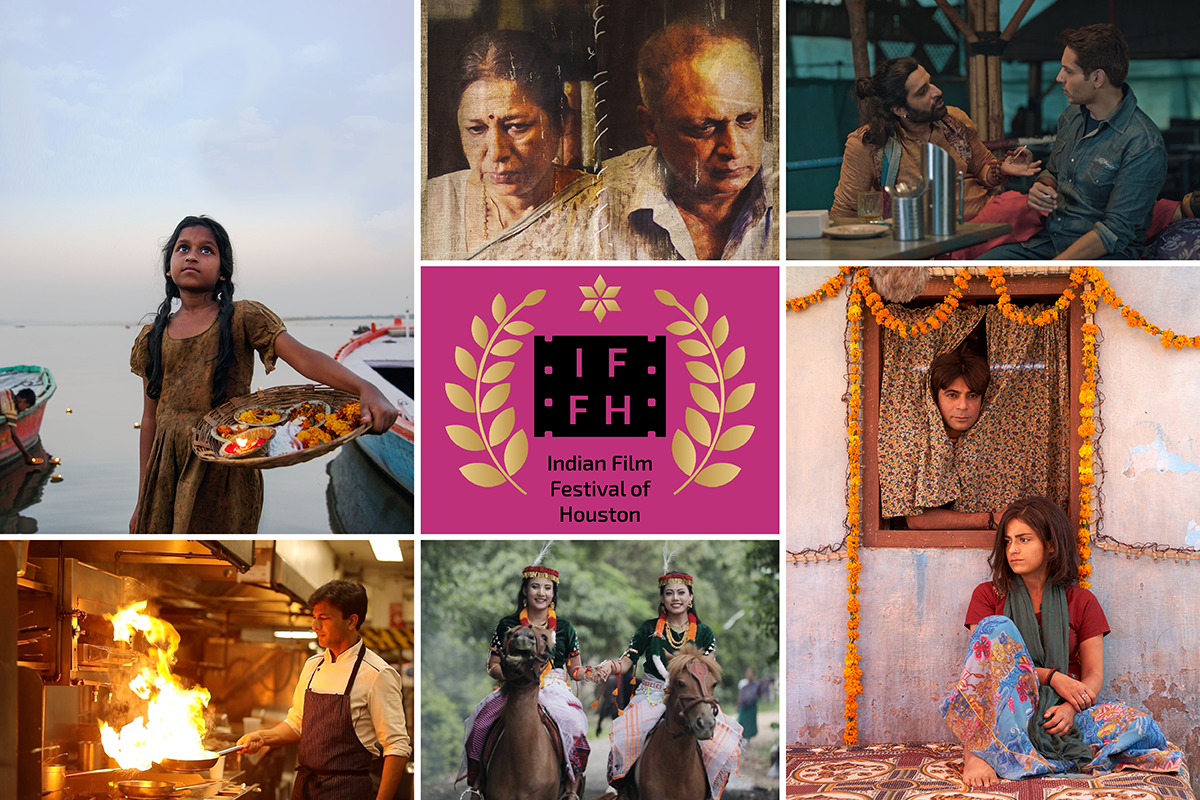 The Indian Film Festival of Houston returns to Asia Society to showcase new and established filmmakers celebrating India and the Diaspora.

5:15 p.m. | Buried Seeds: The Life Journey of Vikas Khanna (Documentary Film), followed by a Q&A Session
Director: Andrei Severny | Duration: 75 minutes | Language: English
Starring: Vikas Khanna
A timeless story of human passion, willpower, and resolve in the face of adversity. Told through the eyes of Michelin Star chef Vikas Khanna, the documentary is an immigrant’s journey through overcoming disability, poverty and discrimination. Born with clubbed feet Vikas is ridiculed for his leg braces. He finds shelter in the kitchen and dreams of becoming a chef one day. With the guidance of his mother and grandmother Vikas learns to run and cook. He witnesses massacre and destruction of the Sikh’s Golden Temple. At the age of 29, Vikas comes to New York. He goes from living in a homeless shelter to opening a restaurant, becoming a Michelin star chef, and a TV star. He learns that life is a never-ending cycle where one has to die and be reborn.
About the Director: Andrei Severny is a filmmaker, photographer and video artist based in New York. His works operate on multiple levels engaging both intuition and intellect. His stories often integrate scientific analysis and reveal unique vision of the future. On his quest to show the inner world Severny engages in both reality and abstraction. Severny’s narrative and documentary films explore art, human perception, senses, psychology and neuroscience. Severny was born in 1977 in Moscow, Russia into a family of astronomers.

7:45 p.m. | Dhut (Short Film)
Director: Manish Tiwari | Duration: 12 minutes | Language: Hindi (English subtitles)
Starring: Iqbal Khan and Shakti Anand
A pretentious man returns to his native city of Bhopal to meet up with some of his old college buddies and proceeds to poke fun at some of them who are still struggling. By the end of the reunion, karma strikes back and takes its toll which changes Ravi’s life forever.
About the Director: This is Manish's directorial debut film. He left his flourishing career in the merchant navy and stepped into the world of cinema to pursue his life-long of becoming a writer-director. Manish loves writing and has written many TV serials, audio stories and ad-films.

8 p.m. | The Last Color (Feature Film)
Director: Vikas Khanna | Duration: 91 minutes | Language: Hindi (English subtitles)
Starring: Neena Gupta, Rajeswar Khanna, Aslam Shekh
The inspiration of the movie comes from the day when widows of Vrindavan and Banaras celebrated Holi for the first time, breaking a centuries old taboo. The film is a poignant story of love, friendship, commitment and victory of the human spirit seen through the eyes of a 9-year-old flower seller and a 70-year-old widow.
About the Director: This film marks the directorial debut of award winning, Michelin Starred Chef Vikas Khanna, a restaurateur, food writer and humanitarian based in New York. Deutsche Welle named Khanna in the list of “10 most influential chefs in the world, who have changed our eating habits.” Khanna is the creator of The Holy Kitchens, documentary film series that explore food sharing traditions in different faiths.

5:10 p.m. | Katran (The Uncalled) (Short Film)
Director: Prem Singh | Duration: 15 minutes | Language: Hindi (English subtitles)
Starring: Iqbal Khan
Katran is a story of an elderly couple, who decide to part ways after 36 years of their marriage but in the end realize that in some obscure corners of their house, still resides a little tug of love that brings them together.
About the Director: Prem Singh is a Writer and Director based in Mumbai, India. After finishing his studies Animation & VFX, he started his career as an animator in 2010. He entered the film scene around seven years back as an Animator, VFX specialist and then Assistant Director.

5:25 p.m. | Daughters of the Polo God (Documentary Film), followed by a Q&A Session
Director: Roopa Barua | Duration: 34 minutes | Language: Meiteilon (English subtitles)
A film about an endangered breed of ponies and empowering women in the sport of polo, a traditionally male sport. A young polo sisterhood is developing in Manipur that ploughs on in spite of adversity and political turmoil. They are intensely connected to their sacred ponies and play in an international tournament every year.
About the Director: Director Roopa Barua, a graduate in economics from Boston University, studied film production at the New York Film Academy and film criticism at the University of California, Berkley. Roopa was a banker with Morgan Stanley in Boston and San Francisco. She has a degree in Economics and Finance from Boston University. Roopa runs the Kahini Media production house out of Mumbai and seeks to create nuanced cinema that goes beyond geography and human boundaries.

7 p.m. | Pataakha (Feature Film), followed by a Q&A Session.
Director: Vishal Bhardwaj | Duration: 134 minutes | Language: Hindi (English subtitles)
Starring: Sanya Malhotra, Radhika Madan, Sunil Grover
Pataakha is a comedy-drama about two sisters, Badki and Chhutki, who have grown up in a small village in Rajasthan. The constant war between the siblings has haunted their lives, right from learning to walk to searching for husbands. When they meet their soulmates, they are relieved to know that they will finally be free of each other. But as fate would have it, it seems that they can't live with or without each other. The film is based on a short story by the renowned writer Charan Singh Pathik. It is directed by Vishal Bhardwaj and produced by Kyta Productions, B4U Motion Pictures and Vishal Bhardwaj Films. It stars Sanya Malhotra, Radhika Madan, Sunil Grover, Saanand Verma, Namit Das, Abhishek Duhan and Vijay Raaz.
About the Director: Vishal Bhardwaj is an Indian Film Director, screenwriter, producer, music composer and playback singer. Known for his work in Hindi cinema, Vishal is the recipient of seven National Film Awards in four categories.

The below ticket levels are per day for both Friday and Saturday.

The Indian Film Festival of Houston (IFFH) Inc. is a 501(c)(3) nonprofit organization devoted to education in the fields of film and television and in creating a greater appreciation of Indian cinema and culture by showcasing quality films that honor entertainment industry performers and film makers while promoting the diverse perspectives of the Indian diaspora.

IFFH offers events that appeal to cinema buffs and cultural enthusiasts in Houston and beyond. Apart from foreign and domestic visitors, Houston's cultural, educational and business diversity are also well-represented with a significant presence of the Houston consular corps, city officials, Women in Film, the Houston Film Commission, students and faculty from major Houston-area universities, and major corporations.

Performing Arts and Culture programs are presented by Wells Fargo. Major support for Performing Arts programs comes from Nancy C. Allen, Ellen Gritz and Milton Rosenau, the City of Houston through Houston Arts Alliance, and the Anchorage Foundation. Generous funding also provided by AARP, The Clayton Fund, Miller Theatre Advisory Board, New England Foundation for the Arts. Additional support provided by the Wortham Foundation, the Texas Commission on the Arts, and through contributions from the Friends of Asia Society, a premier group of individuals and organizations committed to bringing exceptional programming and exhibitions to Asia Society Texas Center. This program is presented in partnership with the Indian Film Festival of Houston.