A Conversation with Vijay Iyer

Previewing the May 5 Houston Premiere of "Radhe Radhe: Rites of Holi" 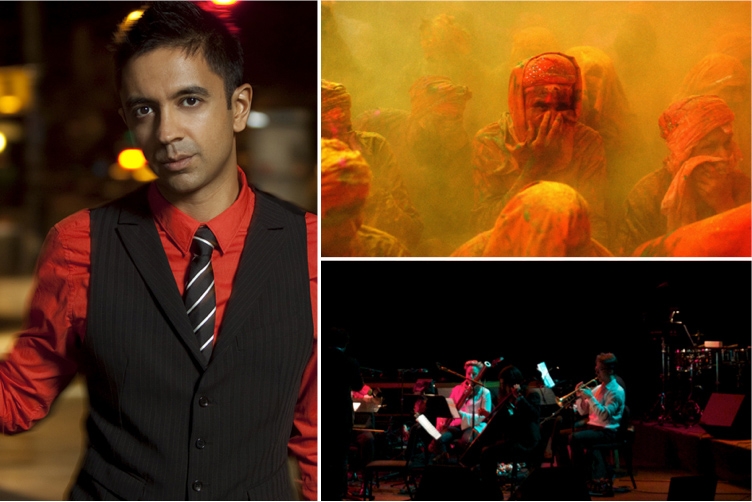 MacArthur Fellow Vijay Iyer shares the inspiration behind and process of creating his explosive work of live music and film inspired by the Hindu festival of Holi.

A remarkably inventive musician who is at home in both the worlds of jazz and contemporary concert music, American pianist and composer Vijay Iyer’s originality draws much from his rich Indian heritage. With Radhe Radhe: Rites of Holi, performed by Iyer and the virtuosic International Contemporary Ensemble, Iyer responds to Stravinsky’s Rite of Spring with an explosive work of live music and film inspired by the ancient Hindu Holi festival of colors and love celebrated each spring in southern Asia.

"Radhe Radhe is a richly successful creative expression … visually and sonically dazzling collaboration … here’s hoping that many viewers and audiences get a chance to experience Holi through Bhargava and Iyer’s eyes and ears.” — National Public Radio

NPR: "Colors Swirl In A Real Rite Of Spring"

The Huffington Post: "Ritual Action: Vijay Iyer and Prashant Bhargava Merge The Rite of Spring With the Holi Festival"

Grammy-nominated composer-pianist Vijay Iyer (pronounced “VID-jay EYE-yer”) was described by Pitchfork as “one of the most interesting and vital young pianists in jazz today,” by the Los Angeles Weekly as “a boundless and deeply important young star,” and by Minnesota Public Radio as “an American treasure.” He has been voted DownBeat Magazine’s Artist of the Year three times — in 2016, 2015 and 2012. Iyer was named Downbeat’s 2014 Pianist of the Year, a 2013 MacArthur Fellow, and a 2012 Doris Duke Performing Artist. In 2014 he began a permanent appointment as the Franklin D. and Florence Rosenblatt professor of the arts in the Department of Music at Harvard University.

About Da Camera of Houston

Da Camera of Houston has established itself as one of America’s leading presenters and producers of ensemble music. The organization is widely acclaimed for its innovative programming, notably Artistic and General Director Sarah Rothenberg’s unique concerts connecting music with literature and the visual arts, as well as for its jazz series, featuring a distinctive mix of renowned performers and emerging artists.

Bank of America is presenting sponsor of Performing Arts and Culture programs. Generous funding also provided by AARP, Nancy C. Allen, CNOOC-NEXEN, the City of Houston through Houston Arts Alliance, The Clayton Fund, the Cullen Trust for the Performing Arts, and Mickey Rosenau & Dr. Ellen Gritz. Funding is also provided by Friends of Performing Arts and Culture at Asia Society Texas Center, a premier group of individuals and organizations committed to bringing the best in public programming to Houston. This program is in collaboration with the Da Camera of Houston.