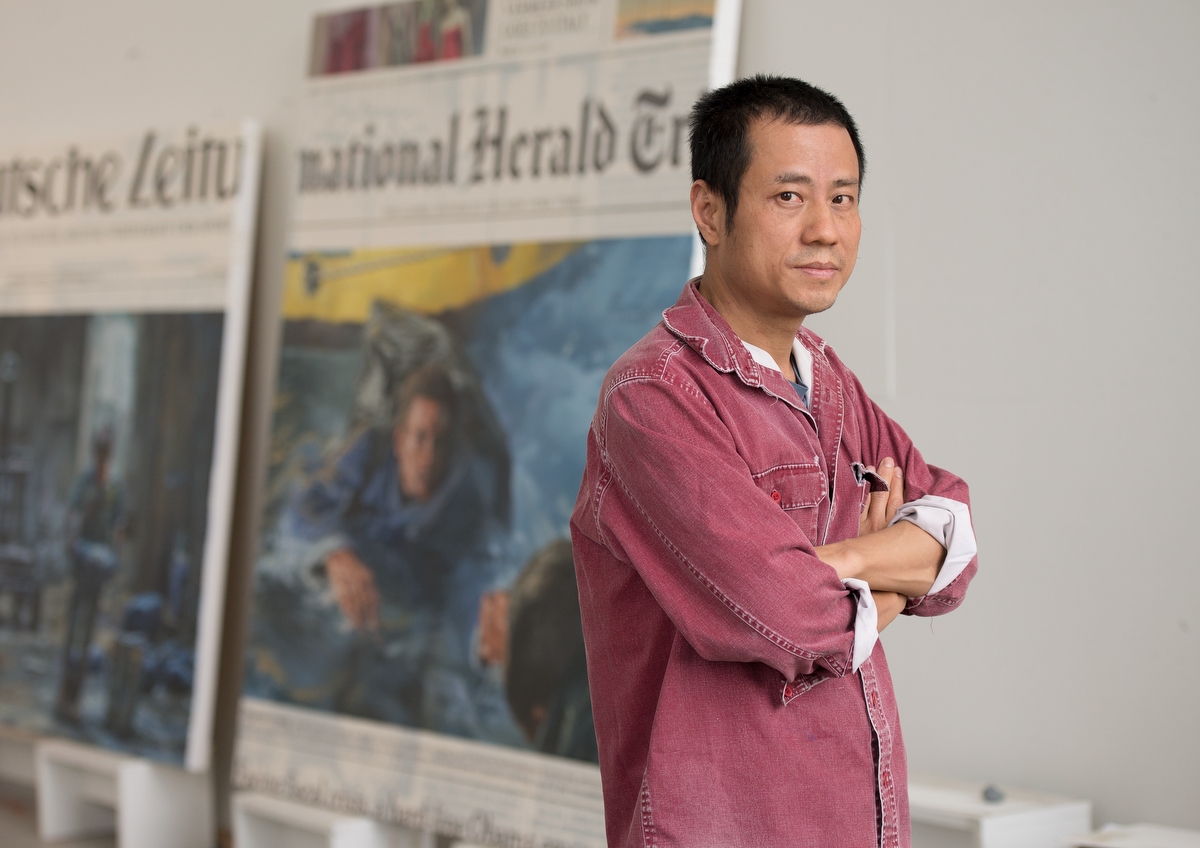 Portrait of the artist. © Xiaoze Xie

The so-called "Library Cave" is located in the Dunhuang cave complexes in China and was a sealed treasury containing ancient manuscripts in 17 languages from the previous millennia. After visiting the site, Xiaoze Xie began to question what it would mean for him as a Chinese-American artist to reconnect with the vast traditions of ancient Chinese art.

Xie discusses the significance of Dunhuang to his creative practice, and its role in his current projects. Anne Feng, Assistant Professor, Boston University, will moderate the presentation.

Xiaoze Xie received his Master of Fine Art degrees from the Central Academy of Arts & Design in Beijing and the University of North Texas. He has had solo exhibitions at the Denver Art Museum; the Scottsdale Museum of Contemporary Art, AZ; Knoxville Museum of Art, TN; Dallas Visual Art Center, TX; Modern Chinese Art Foundation, Gent, Belgium; Charles Cowles Gallery, New York; Chambers Fine Art, New York; Gallery Paule Anglim, San Francisco; Nicholas Metivier Gallery, Toronto; China Art Archives and Warehouse, Beijing; Gaain Gallery, Seoul; among others. He has participated in numerous group exhibitions including Shu: Reinventing Books in Contemporary Chinese Art at the China Institute Gallery in New York and Seattle Asian Art Museum, and the traveling exhibition Regeneration: Contemporary Chinese Art from China and the US.  Xie’s exhibitions have been reviewed in New York Times, Art in America, Art Asia Pacific, Art News, Chicago Tribune, The Globe and Mail, and San Francisco Chronicle. His work is in the permanent collection of such institutions as  the Denver Art Museum, the Museum of Fine Arts Houston, the Scottsdale Museum of Contemporary Art, San Jose Museum of Art and the Oakland Museum of California. Xie received the Painters and Sculptors Grant from the Joan Mitchell Foundation (2013), Pollock-Krasner Foundation Grant (2003) and artist awards from Phoenix Art Museum (1999) and Dallas Museum of Art (1996). Xie is the Paul L. & Phyllis Wattis Professor of Art at Stanford University.

Anne Feng, Assistant Professor, Boston University, is a historian of Chinese art with specialties in Buddhist art and Dunhuang Caves of the Tang dynasty (618-907). Her current research interests include sacred space and ritual art, theories of vision and meditation, mural painting practices, visual and material cultures of the Silk Road, and representations of the Western Pure Land. Her research has been supported by the Dunhuang Academy, the Dunhuang Foundation, the Franke Institute for the Humanities, and the Fulbright-IIE Fellowship (2014-2015).

About the Dunhuang Foundation

Since 2010, the Dunhuang Foundation has worked with the Dunhuang Academy to conserve the Dunhuang caves. The Foundation supports the Academy in becoming one of the world’s foremost conservation science and research institutions through funding strategically important programs. In 2015, the Foundation’s mission expanded to include a commitment to public engagement activities rooted in the themes of Buddhism, the Silk Road, and cultural heritage preservation.

This program is presented in collaboration with Dunhuang Foundation.

Click for directions
RSVP
Free
20191105T183000 20191105T193000 America/Chicago Asia Society: Artist Talk: Xiaoze Xie on 'Amber of History: Reinventing the Library Cave in Dunhuang' Celebrated artist Xiaoze Xie will discuss the significance of the Dunhuang cave complex to his creative practice, and its role in his current projects