The Art of the Afghan Rubab 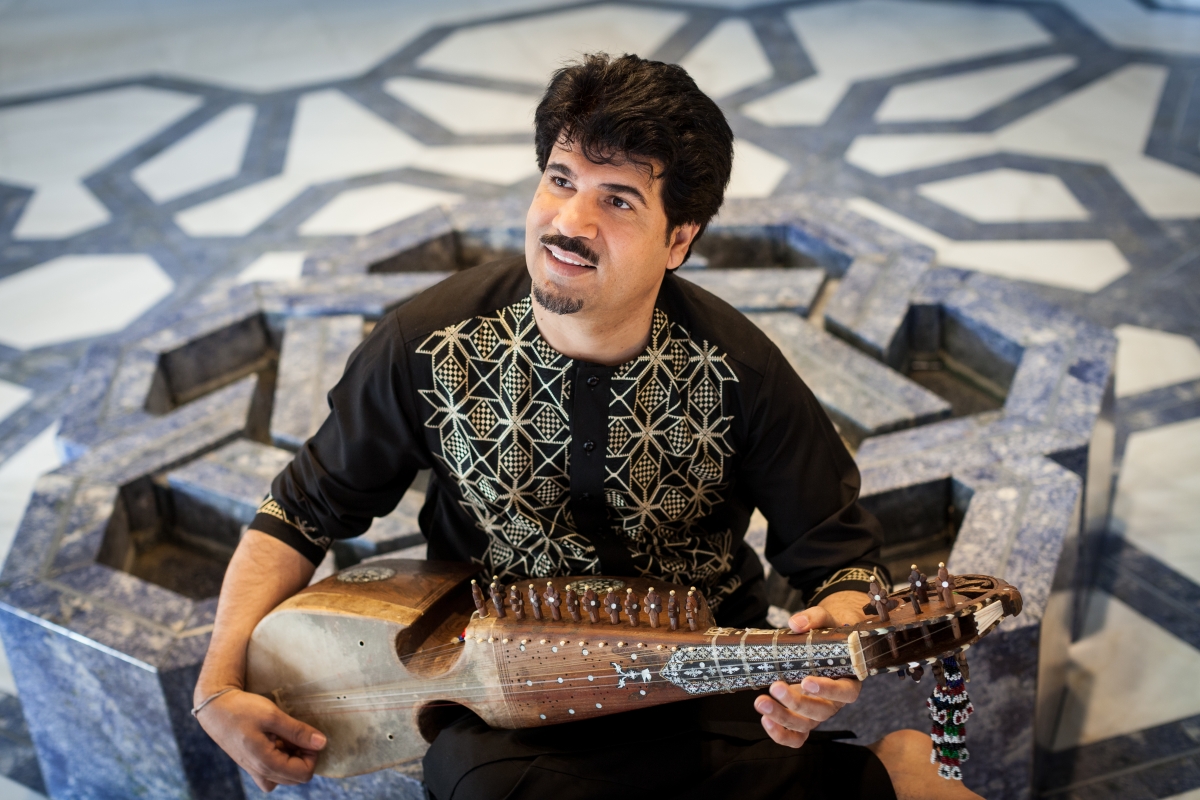 The artistry of Homayoun Sakhi demonstrates how an imaginative musician working with a traditional musical idiom can enrich and expand its expressive power while respecting a taste and sensibility passed down from master musicians of the past. Both the Afghan rubab and its music are very much hybrid creations. The rubab itself is of Central Asian origin — one of a family of double-chambered lutes that includes, among others, the Iranian tar, Tibetan danyen, and Pamiri rubab. Homayoun Sakhi's musical style and repertoire, while rooted in the raga tradition of North India, also display strong stylistic links to Iran and Central Asia. These multicultural influences are highlighted by the co-presence in this evening's concert of two percussion instruments: the Uzbek-Tajik frame drum (doira) and the North Indian tabla — both played by master musicians who are Homayoun Sakhi's peers in their dazzling virtuosity and exuberant musical imagination.

Homayoun Sakhi is a master performer on Afghan rubab as well as a composer who brings together Eastern and Western musical languages and instruments. Born in Kabul into one of Afghanistan’s leading musical families, Sakhi is the heir to a musical lineage that began in the 1860s, when the ruler of Kabul, Amir Sher Ali Khan, brought classically trained musicians from India to perform at his court. Sakhi performs Afghan folk and popular music as well as North Indian classical music (raga). His composer credits include “Rainbow,” for Afghan rubab, Indian and Central Asian percussion, and string quartet.

Abbos Kosimov was born in Tashkent, Uzbekistan, into a musical family. A disciple of the honored Uzbek doira player Tuychi Inogomov and winner of the Competition of Percussion Instruments of Central Asia and Kazakhstan, Kosimov established his own doira school in 1994 and his ensemble, “Abbos,” in 1998. Kosimov performs internationally with Zakir Hussain and Randy Gloss’s percussion group Hand’s OnSemble, recorded with Stevie Wonder, and has also composed music for percussion ensemble.

Nitin Mitta was born and raised in Hyderabad, India. He studied tabla with Pandit G. Satyanarayana and later with Pandit Arvind Mulgaonkar, both of whom trace their musical lineage to the venerable Farrukhabad gharana of tabla. Nittin Mitta regularly performs with India’s leading Hindustani classical musicians and has also collaborated extensively with musicians who are seeking points of connection between Hindustani music and other musical realms, including jazz pianist and composer Vijay Iyer and vocalist Kiran Ahluwalia.

About The Aga Khan Master Musicians

The Aga Khan Master Musicians create music inspired by their own deep roots in the cultures of the Middle East and Mediterranean Basin, South Asia, Central Asia, and China. Brought together by the Aga Khan Music Initiative to explore how musical innovation can contribute to the revitalization of cultural heritage, the Master Musicians are venerated performers and composer-arrangers who appear on the world’s most prestigious stages while also serving as preeminent teachers, mentors, and curators. Each of these exceptional artists has achieved mastery within a rigorous musical tradition defined by canonical styles, repertoires, pedagogy, and performance techniques. At the same time, they share a belief that tradition can serve as an invaluable compass for an artistic search into new forms of creativity inspired, but not constrained, by the past. This search has led to a strikingly original body of work composed, arranged, and performed by the Master Musicians, often joined by distinguished guests. Recent concerts have featured Kronos Quartet, Malian ngoni virtuoso Bassekou Kouyaté, and the Lisbon-based Gulbenkian Orchestra.

About The Aga Khan Music Initiative

The Aga Khan Music Initiative is an interregional music and arts education program with worldwide performance, outreach, mentoring, and artistic production activities. Launched to support talented musicians and music educators working to preserve, transmit and further develop their musical heritage in contemporary forms, the Music Initiative began its work in Central Asia, subsequently expanding its cultural development activities to include artistic communities and audiences in the Middle East, North Africa and South Asia. The Initiative promotes the revitalization of cultural heritage both as a source of livelihood for musicians and as a means to strengthen pluralism in nations where it is challenged by social, political, and economic constraints.

Performing Arts and Culture programs are presented by Wells Fargo. Major support for Performing Arts programs comes from Nancy C. Allen, Ellen Gritz and Milton Rosenau, the City of Houston through Houston Arts Alliance, and the Anchorage Foundation. Generous funding also provided by AARP, The Clayton Fund, Miller Theatre Advisory Board, New England Foundation for the Arts. Additional support provided by the Wortham Foundation, the Texas Commission on the Arts, and through contributions from the Friends of Asia Society, a dedicated group of individuals and organizations committed to bringing exceptional programming and exhibitions to Asia Society Texas Center. Presented in partnership with the Aga Khan Music Initiative and His Highness the Aga Khan Council for the United States.