Creativity and the Vietnamese American Experience 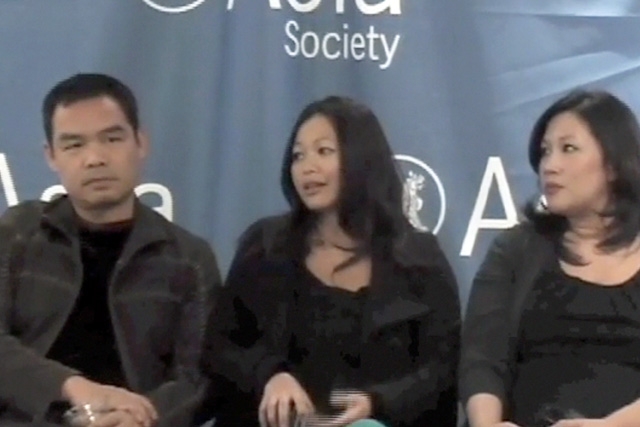 HOUSTON, November 21, 2008 — The things that make us human–challenge, triumph, trust, and love–are also the experiences that define us creatively, whatever ethnic or racial lens we see them through. This was the point made by four Vietnamese American panelists in the final event of Asia Society Texas Center’s series Creative Voices, Creative Minds: The Vietnamese American Experience.

More than 150 people participated in a discussion with the panelists, all of whom provided different perspectives of the creative process: Andrew Lam, writer, editor and regular commentator on NPR; Chloe Dao, a fashion designer and winner of Project Runway who is opening a new line in New York; Dai Huynh, senior features writer with the Houston Chronicle; and Lan Tran, award-winning writer and performer.

Moderator Jerome Vielman of the Houston Arts Alliance used his own work, a haiku collection titled Haiku2u: 101 Select Poems on Love, Trial, Triumph and Trust to create a ‘launch point’ of four fundamental questions. Vielman’s approach led to an engaging discussion that revealed the artists’ journey as a human one, and one that the audience could easily relate to in their own lives.

In talking about challenges, Andrew Lam told the audience—to much knowing laughter—how his mother cried when he revealed that he was going to take up a creative writing course instead of being the doctor his family had hoped for. His father challenged him to name one Vietnamese writer who was then making a living. Lam couldn’t think of one and later, he approached his dad saying, “well, then I’ll have to be the first.”

Chloe Dao spoke of how she triumphed over inevitable stereotypes in the high-fashion design world, such as the ‘gay male designer’, European and Anglo beauty ideals, tall models. Interviewers often stereotyped Chloe—as a woman designer, as a straight designer and as a Vietnamese designer but to her, "these were not really challenges at all." "If you want something so badly,you just do it," she said. "Everyone else might see the challenges ahead but you don’t." Her triumph, she said, came from simply following her passion and doing what she loved doing most.

A huge moment of trust was what Lan Tran said helped build her career. Her "moment of triumph" was not borne of an award or a production and not even the success of her solo show, How to Unravel Your Family, which played to a sold-out audience in the Lincoln Center’s American Living Room Festival. Lan remembered how her father had entrusted her with a revelation about a family member who had committed suicide but made it look like an accident. That was the moment that she felt truly "triumphant.”

The panelists agreed that while their heritage as Vietnamese Americans informed them, it did not exclusively define them. Dai noted that by understanding the hardships faced by her parents and family, she was better able to appreciate and empathize with the experiences of the people she profiled.

The family as a source of inspiration and success was a recurring theme throughout the discussion. Lan Tran eloquently summed up the collective feeling of the panelists when she recounted a conversation with her parents post 9/11. As she told her parents about her horrifying experience of seeing people jump out of the Towers, her parents told her that the Vietnamese community had all hung up American flags. When she asked her parents why they were celebrating, thinking back in her mind to the hardships of the Vietnam War and all they had experienced, they replied, "because of all the opportunities we’ve had and the opportunity you have to live and be an artist."

The panel discussion was the third and last in the series Creative Voices, Creative Minds: The Vietnamese American Experience, presented by Asia Society Texas Center to celebrate the cultural and artistic contributions of Vietnamese Americans. The series complements the exhibition Exit Saigon - Enter Little Saigon, produced by the Smithsonian, and on view at Houston Community College from August to September. The exhibition features Vietnamese American artists from a variety of fields including literature, film, and the visual arts.