HOUSTON, October 29, 2021 — Asia Society Texas launched the seventh year of its signature Bank of America Women’s Leadership Series, which celebrates influential, diverse women making a substantive impact in business and culture. Amid a rise in both racial justice movements and anti-Asian bias, the first of three programs in the series spotlighted Asian American women who are raising their voices, building coalitions, and advancing the rights of their communities.

After noting recent headlines reported that hate crimes targeting Asians had increased 70 percent compared to 2019, Lawson invited the speakers to share their personal stories of being Asian American in the U.S. — and what drove them to tackle the issues of racial justice within their respective fields. Sung recalled childhood taunts about “Asian eyes,” and shared that lately she always worries about her family due to the rise in attacks. She said she is motivated by students, who have experienced tough years amid the pandemic, and wants to focus on their mental health and interpersonal relationships.

Ogle agreed with Sung on relationships. Coming to America from China as an adult, she shared that the language barrier was a disadvantage for her in the corporate world. However, she said,“I always seek what we have in common,” especially in the wake of the increasing anti-Asian incidents. But she noted it is also important to stand up to people who don’t understand. To both build those relationships and stand up against discrimination, Ogle serves on Bank of America's Global Diversity and Inclusion Council.

Shah spoke about how, as she was growing up, people incorrectly assumed her family was related to the Shah of Iran, which prompted her family to display an American flag in front of their house to signal their loyalties. She also pointed out that Asian American leaders who are in government may not be seen as American enough and may face suspicions about their loyalties to another country.

Shah explained that though Asian Americans have a long history of activism in the U.S., it is not a history that is well known. However, she said the past two years of increasing antipathy toward Asians amid the pandemic was a signal to many in those communities that they need to stand up for themselves. According to Shah, Asian Americans make up about 7 percent of the American population, and now they are finding a voice. “We want to be visible, not invisible,” Shah said. “We want to be seen.” She explained this is why TAAF was founded and launched in May 2021 with the mission of investing in and advocating for the Asian American community.

Ogle shared that she is particularly seeing more active involvement from younger generations including her son and his friends, who went to a protest over the death of George Floyd last summer. For many first-generation immigrants as herself, she said the concern is often survival, but she is seeing priorities change for young people. In the corporate world, she noted that there are opportunities beyond financial support as corporations often have a lot of influence to change culture, particularly starting with CEOs. In her view, both local and national efforts are needed to make a difference — and she believes the ongoing conversations can bring greater awareness to Asian communities and experiences.

Sung noted that the rising anti-Asian incidents were also seen in the schools, as students frequently echo what they hear. At the same time, she shared that students are also advocating for each other and learning from each other, which gives her hope. “The future is bright if we can get out of the way and let the next generation lead, I absolutely believe that,” Sung said.

Challenges and hopes for the future

All the speakers said they are optimistic for the future, despite challenges. Shah acknowledged that at times, different communities don’t talk to each other, which can present an obstacle. However, she emphasized that differences should be celebrated even as people come together.

Shah added that Asian Americans are not fighting alone. Following the spa shootings in Atlanta, where most victims were women of Asian descent, Shah said diverse groups such as the Anti-Defamation League reached out to Asian American communities to ask what they could do to help, condemn hate as hate, and unite in working together for justice.

In the end, Shah said, “The best thing we can do is actually be prepared for change, and not let the change be the fear.” 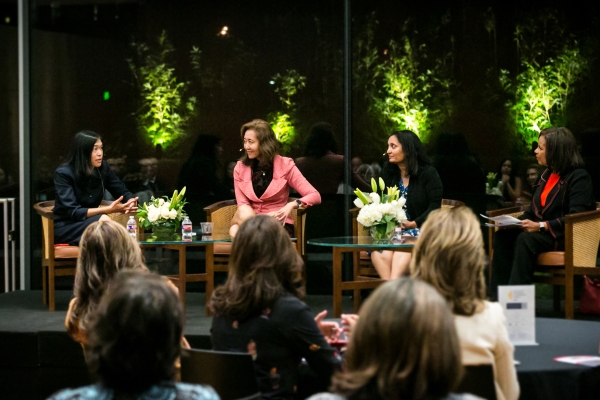 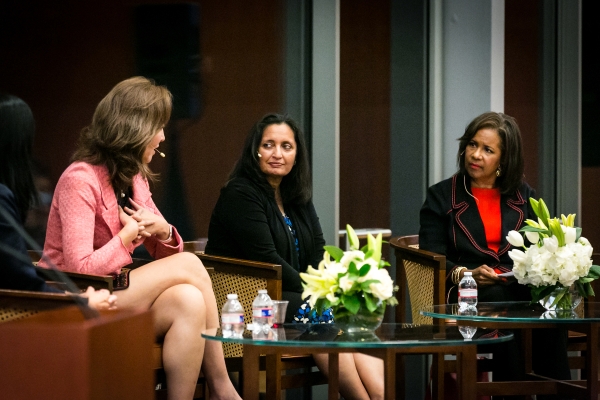 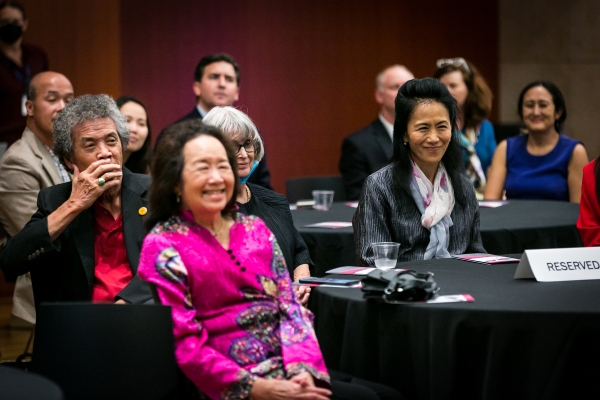 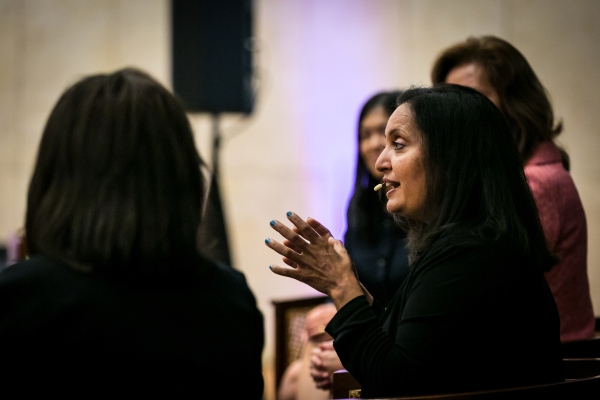 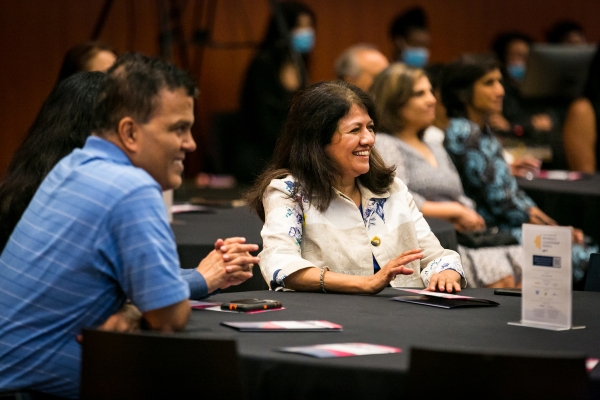 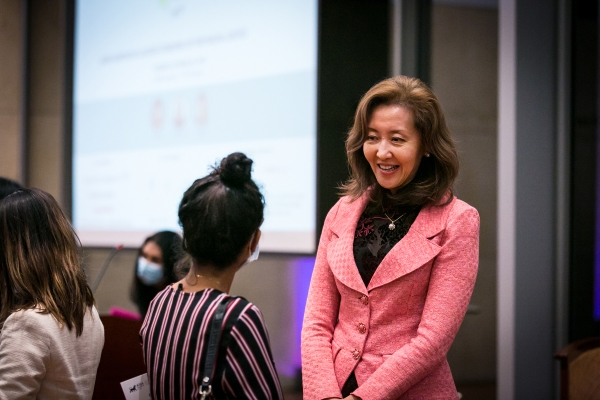 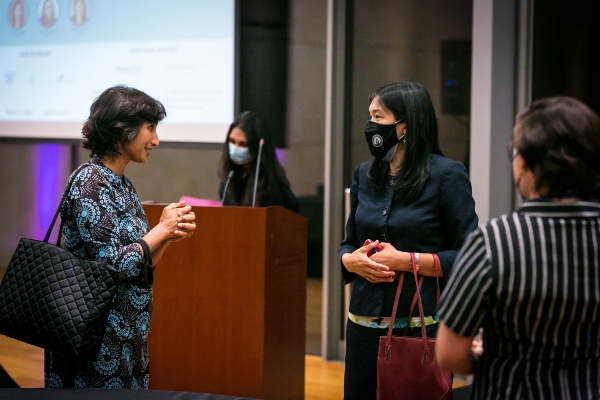 Hong Ogle is Bank of America Houston President. She helps meet the financial needs of individuals, families and businesses by connecting them to the right resources within Bank of America. Hong also leads Bank of America’s local environment, social, and governance work, leveraging the company’s unmatched capabilities to help the region address social and economic challenges and build stronger communities. In addition to her role as Houston President, Hong is the Central South Division Executive for the Bank of America Private Bank. In this role, Hong has the responsibilities to supervise the Private Bank offices in Texas, Kansas, Oklahoma, Arkansas and the surrounding states to deliver top financial solutions to our Ultra-High New Worth clients.

Hong started her career in the early 90’s as a Financial Advisor and moved into management in 1999. Hong joined Bank of America in a leadership position in 2010. Born and raised in Beijing, China, Hong received her Bachelor’s degree from Tsinghua University before coming to the U.S. in 1990 for graduate studies and earning her Master of Science degree from Florida State University. She is a NASD Registered Principal with Series 3, 7, 8, 31, 63, and 65 securities licenses. Hong was selected as one of Houston’s most admired CEOs in 2019 by the Houston Business Journal. She serves on the board of Central Houston Inc. and is involved in the United Way Women’s Initiative. Hong chairs the Bank of America Charitable Foundation in Houston. She is a member of the Bank of America Global Diversity and Inclusion Council and the executive sponsor of the Houston Asian Leadership Network.

Sonal Shah is the founding President of TAAF. One of the foremost global leaders on social impact and innovation, Sonal has started and led social impact efforts in academia, government, and the private and philanthropic sectors for over twenty-five years. Prior to her appointment at TAAF, Sonal founded and led Georgetown University’s Beeck Center for Social Impact and Innovation, a cross-disciplinary center that provided students a first-hand opportunity to work on social impact projects in the public, private and social sectors.

Sonal has extensive experience in both the public and private sectors. She served as Deputy Assistant to President Obama and Director of the White House Office of Social Innovation and Civic Participation, where she was tasked with creating innovative approaches to using technology for social programs across the federal government and with building public private partnerships at scale. Previously, she worked as an international economist at the Department of Treasury, setting up the central bank in Bosnia, working for post-conflict reconstruction in Kosovo, and implementing poverty reduction strategies in Africa. In the private sector, Sonal led technology initiatives for civic voice and impact investing as the head of Global Development Initiatives at Google.org. Prior to her time at Google.org, she developed the environmental strategy and ran the initiatives for investing in clean technologies at Goldman Sachs. Sonal serves on the boards of Oxfam America, the UBS Optimus Foundation, and The Century Foundation. She also serves as an adviser to the Democracy Fund and is coordinating the Initiative on Tech & Society at Georgetown University. In 2020, she served as the National Policy Director for Mayor Pete Buttigieg’s presidential campaign.

Anne Sung has been a strong advocate for good governance, careful stewardship of taxpayer dollars, college and career readiness standards, strategic partnerships to bring wrap-around services to schools, and improved special education services since joining the HISD Board of Education in January 2017. A proud graduate of HISD schools and Harvard University, Anne fell in love with education as a young Teach for America corps member. She taught at Wisdom High School, where she served as chair of the science department and was 2011 Teacher of the Year. She previously served as Director of Strategic Planning and Public Policy for the Harris County Sheriff’s Office and Chief Strategy Officer at Project GRAD Houston, an educational non-profit preparing students to achieve their college and career goals.

Anne is an American Leadership Forum Senior Fellow, a Texas Association of School Boards (TASB) Master Trustee, and serves on the boards of TASB, the SPARK School Park Program, and OCA - Greater Houston, an APIA civil rights organization. Anne has a B.A. and M.A. in Physics and a Master in Public Policy from Harvard University.