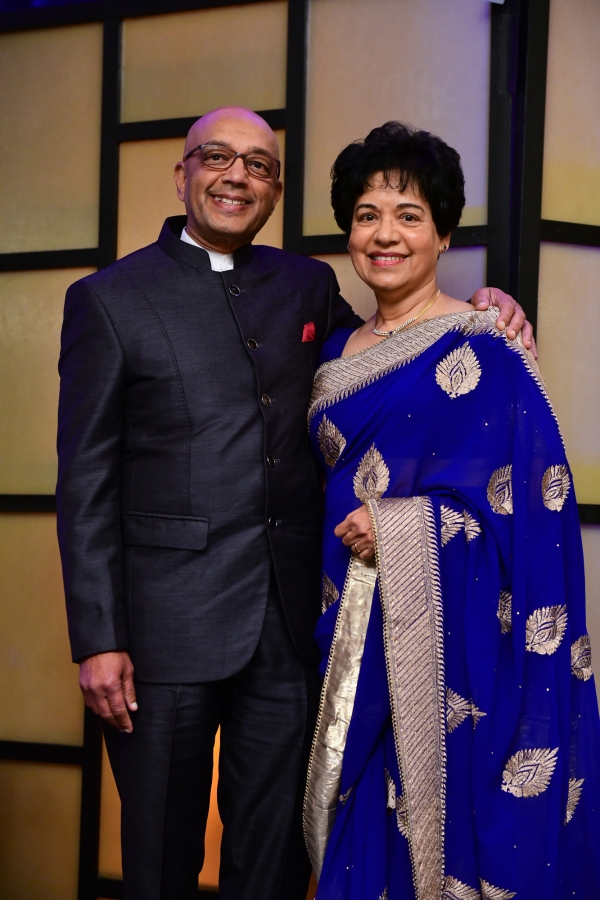 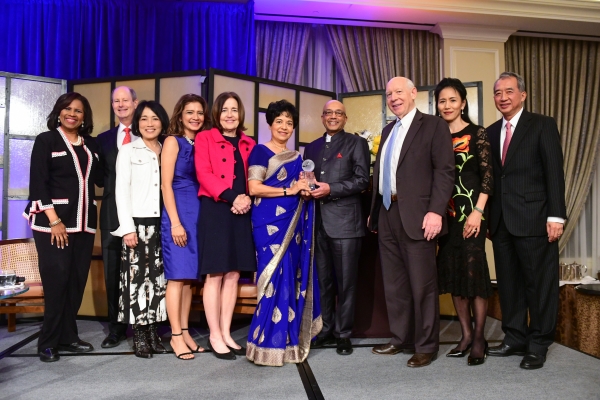 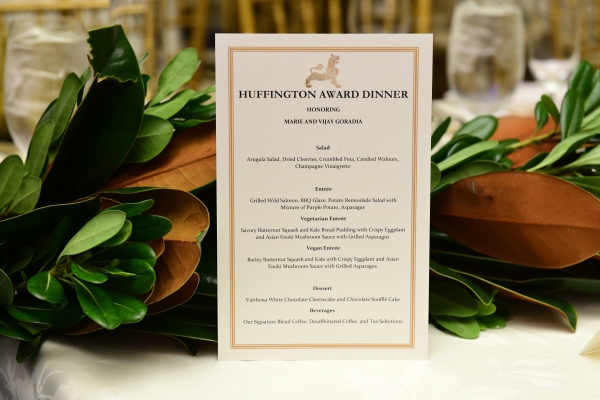 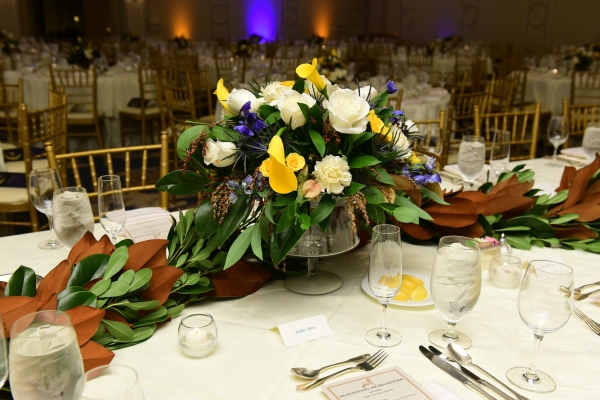 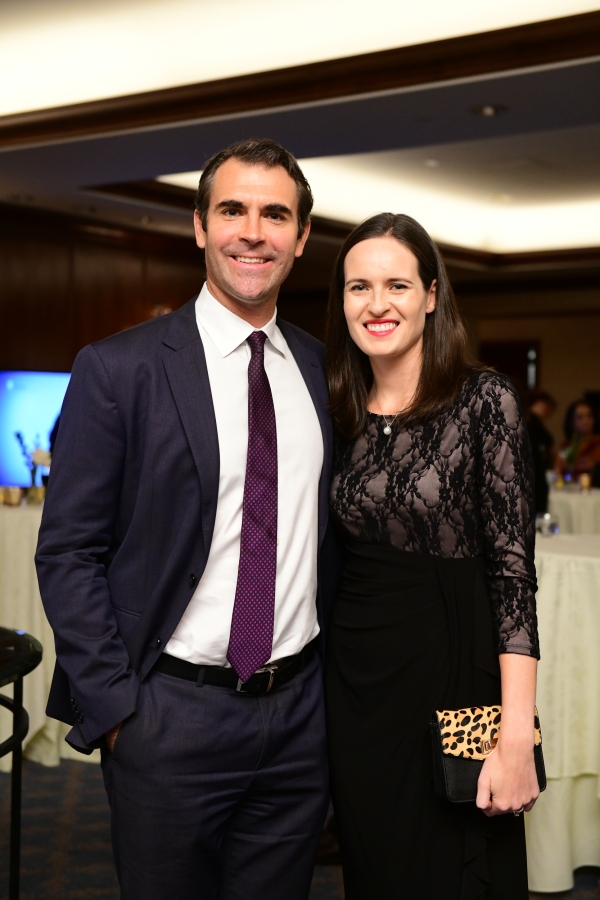 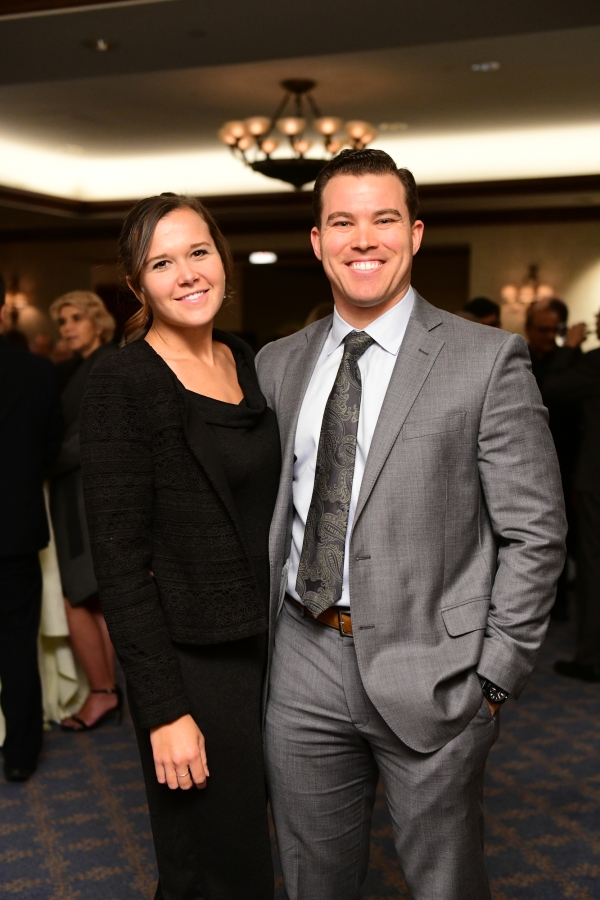 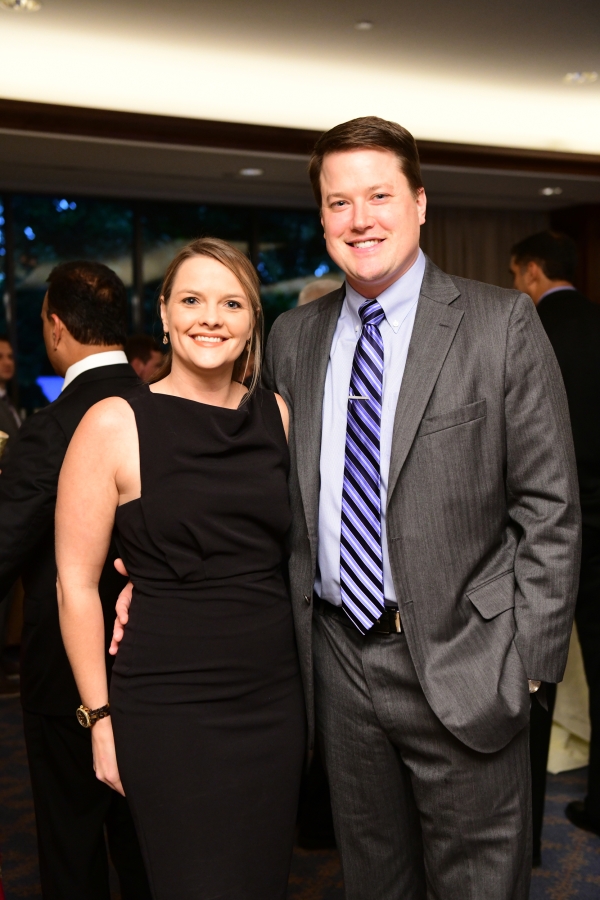 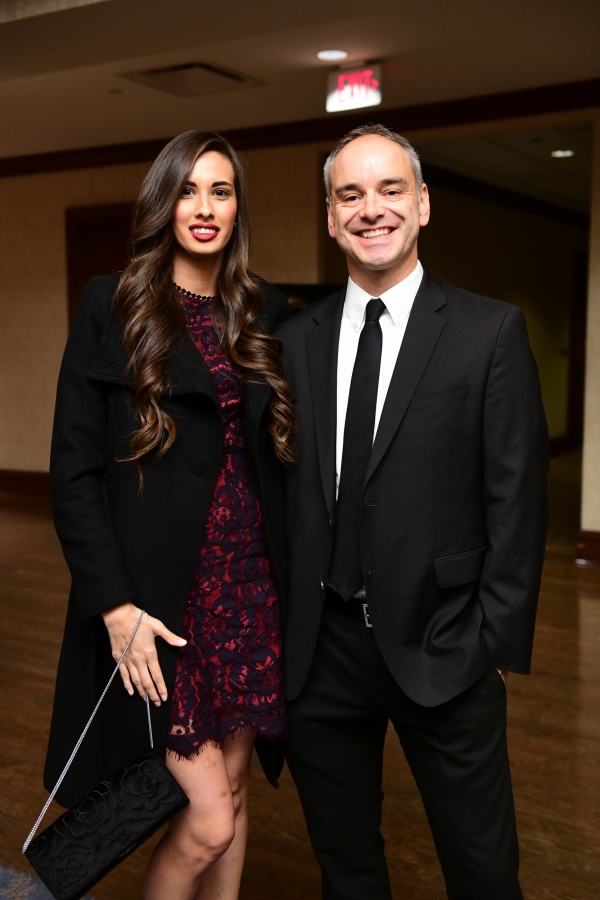 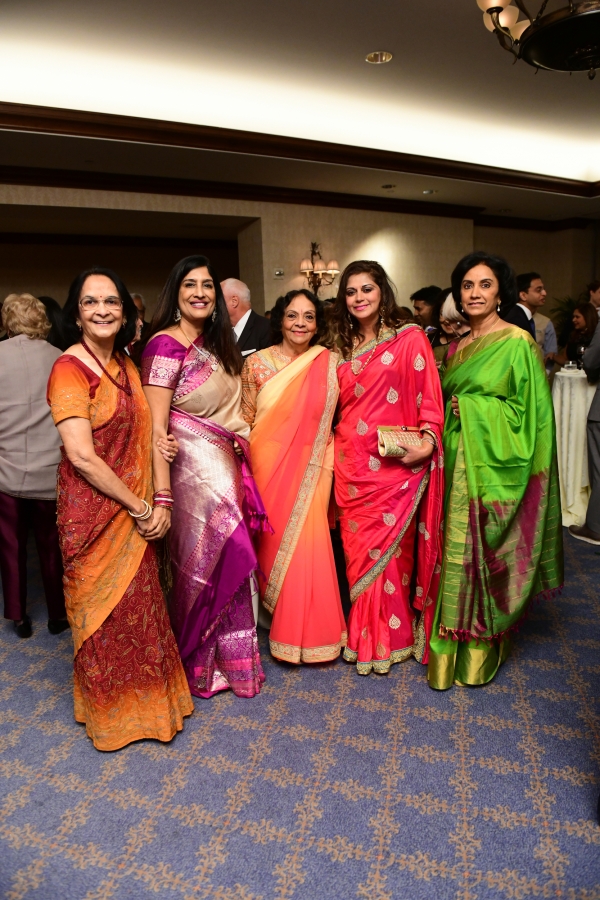 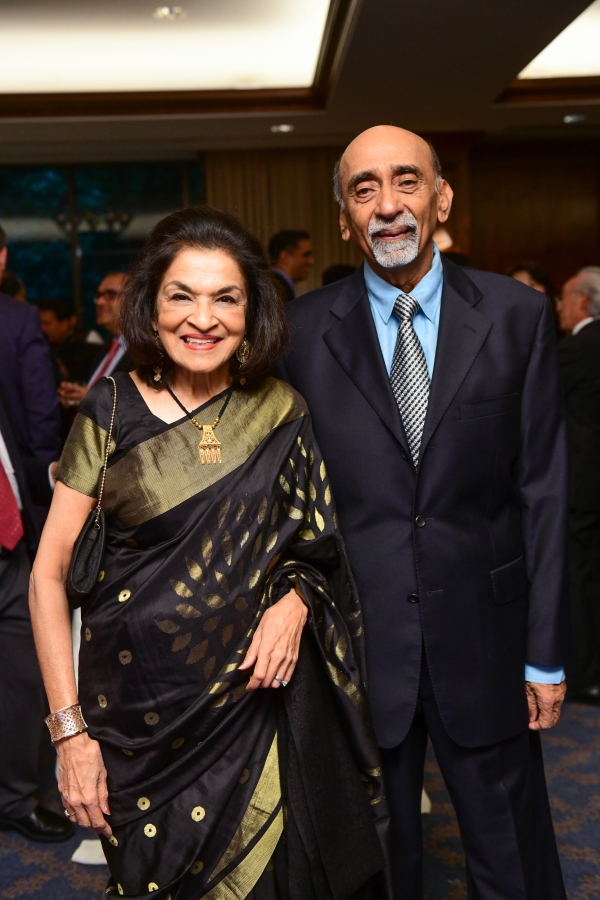 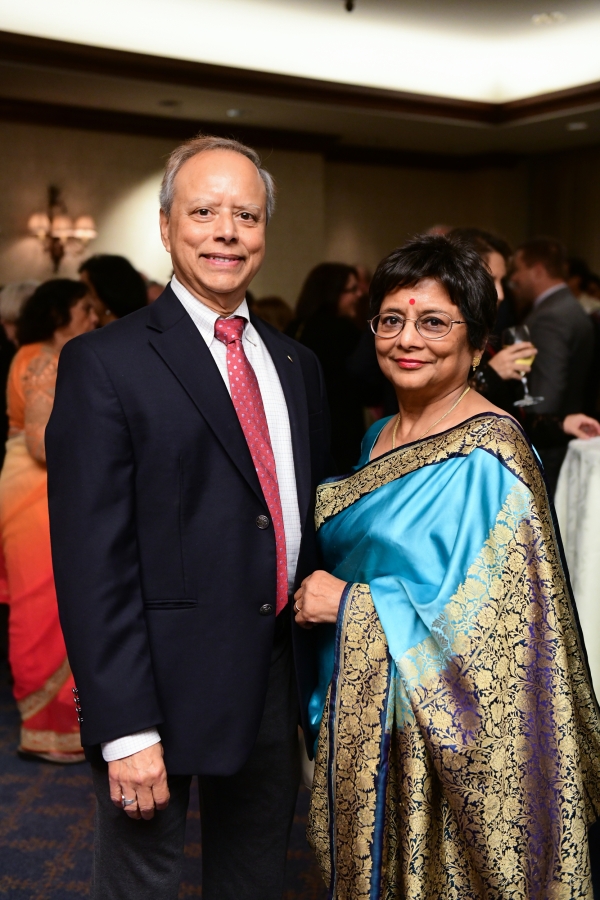 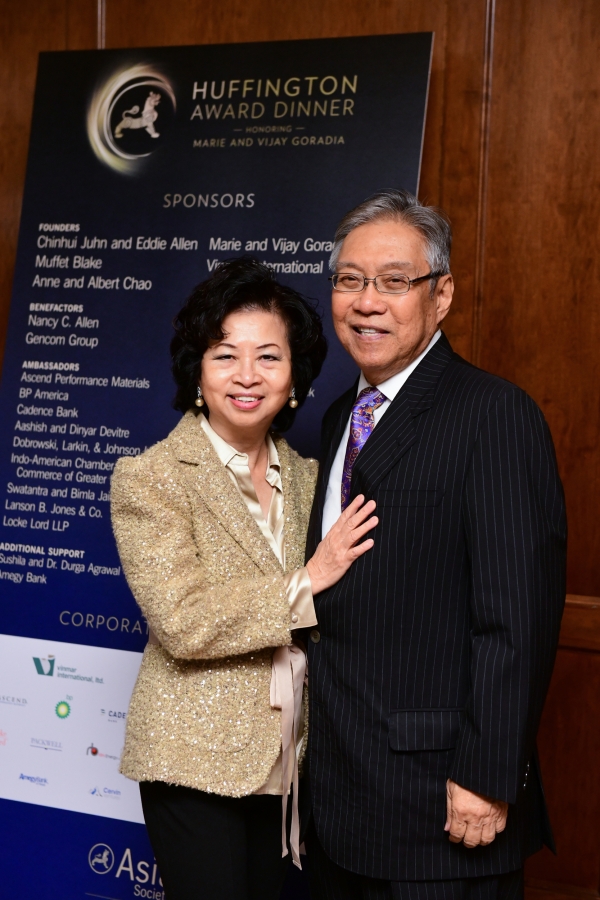 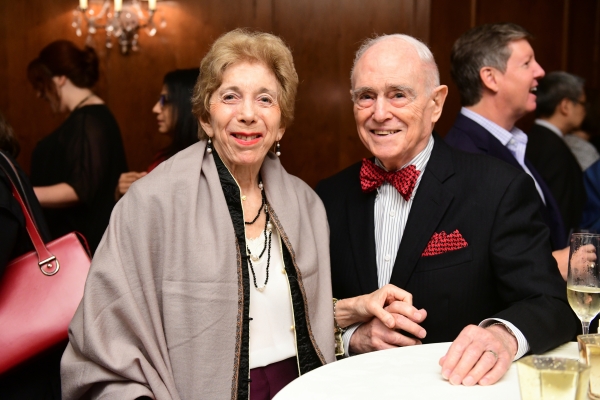 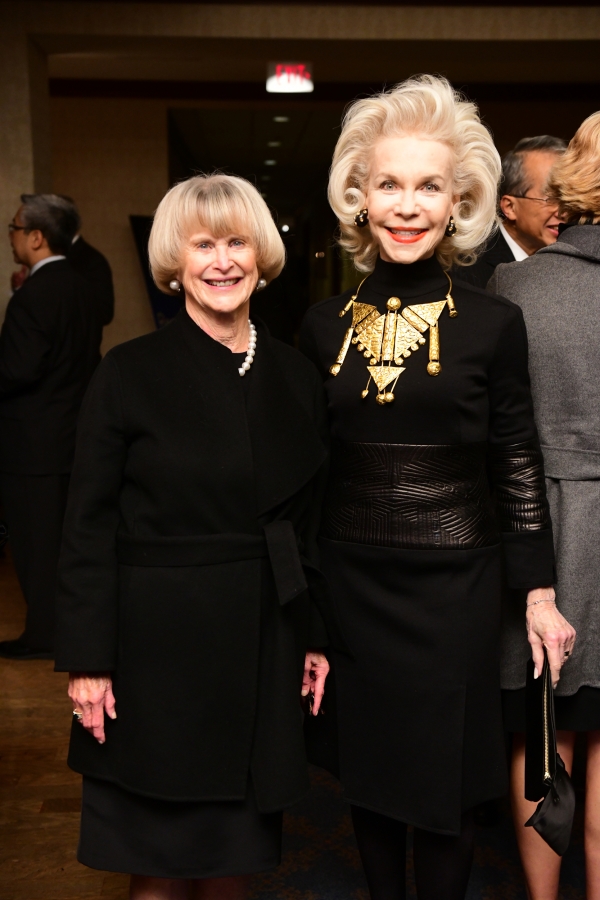 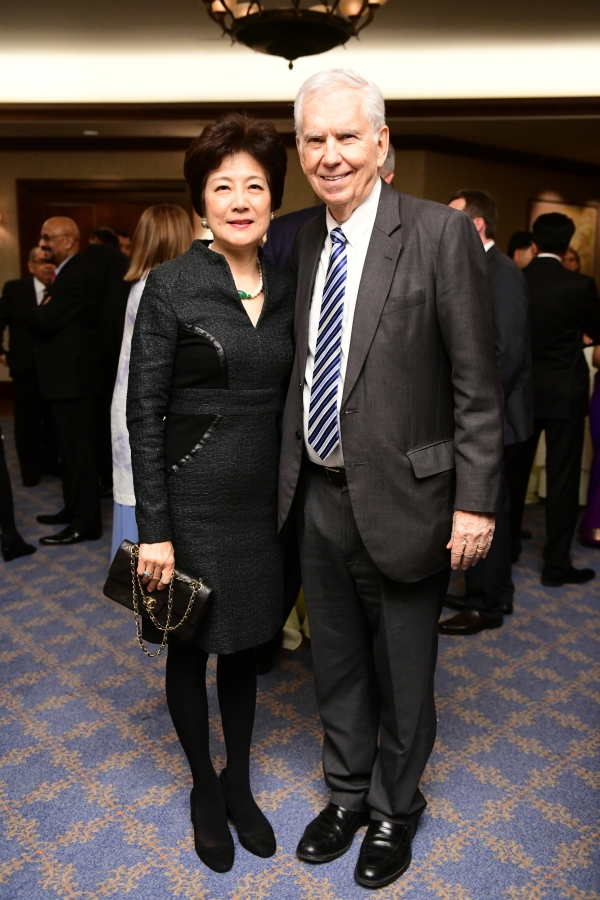 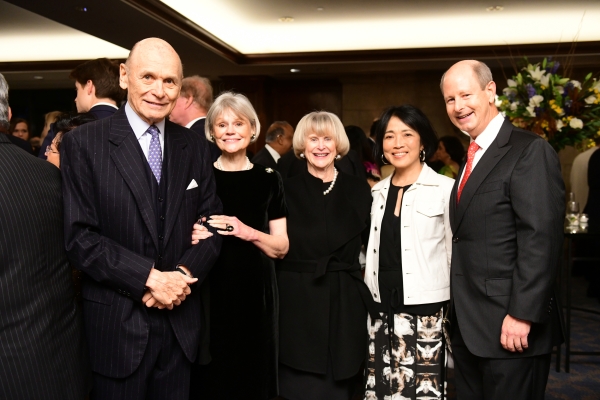 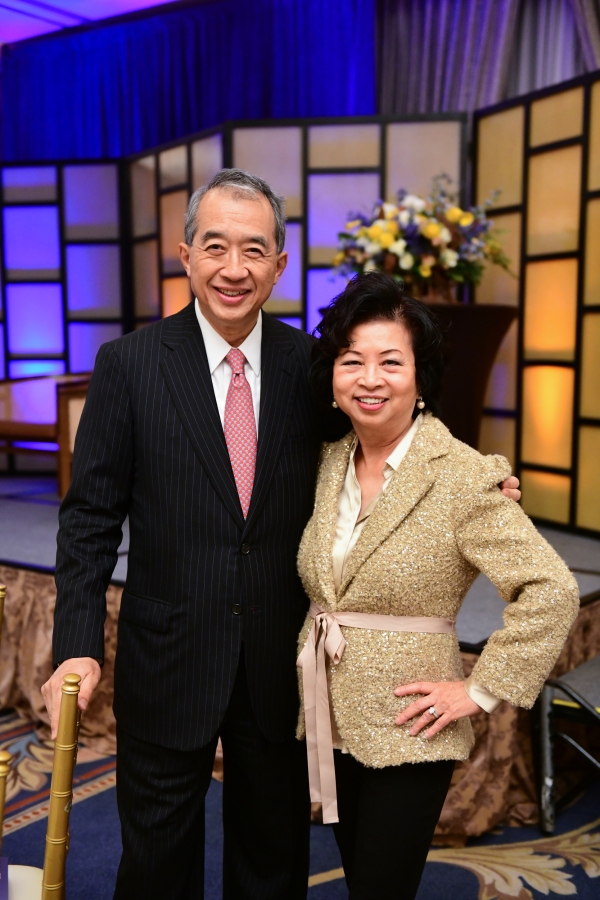 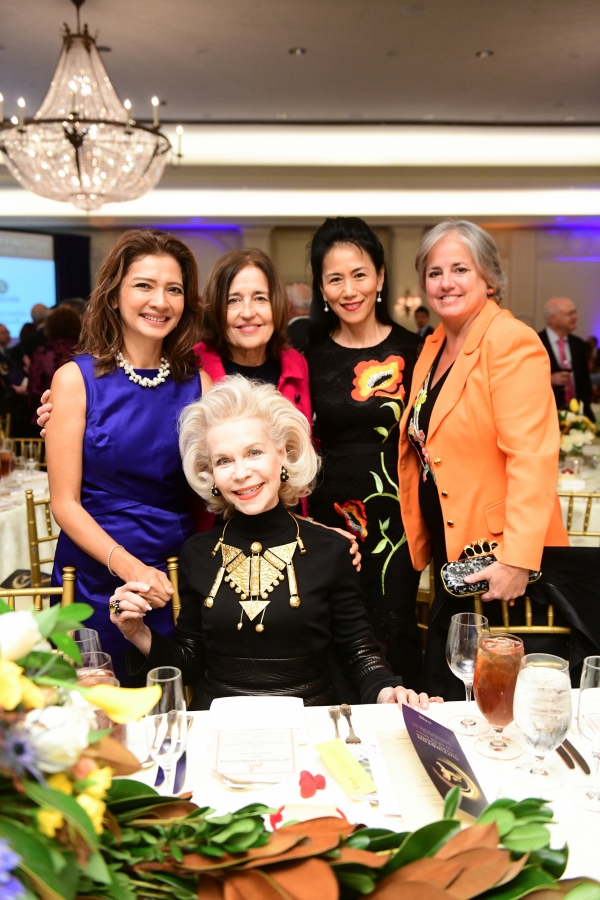 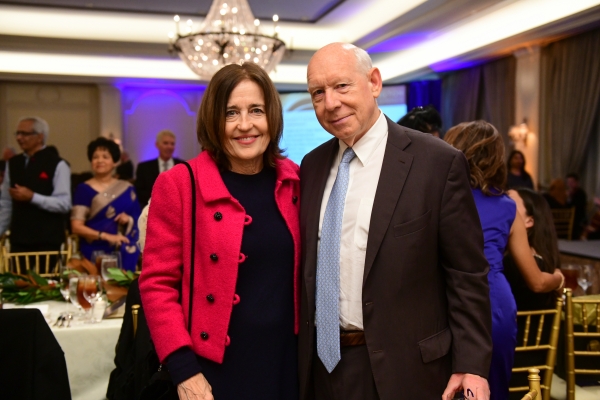 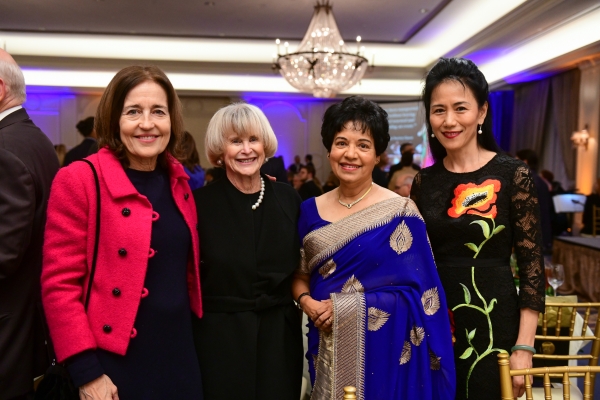 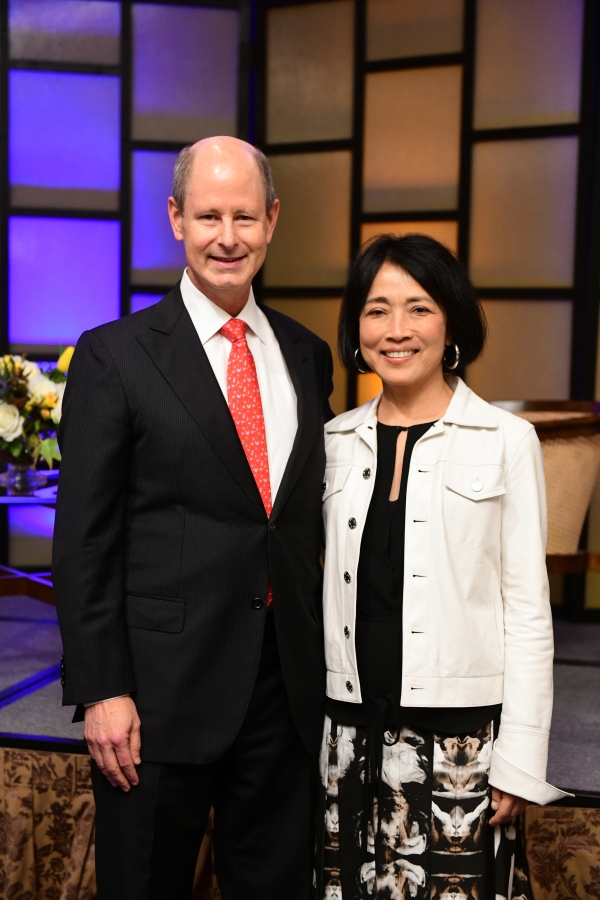 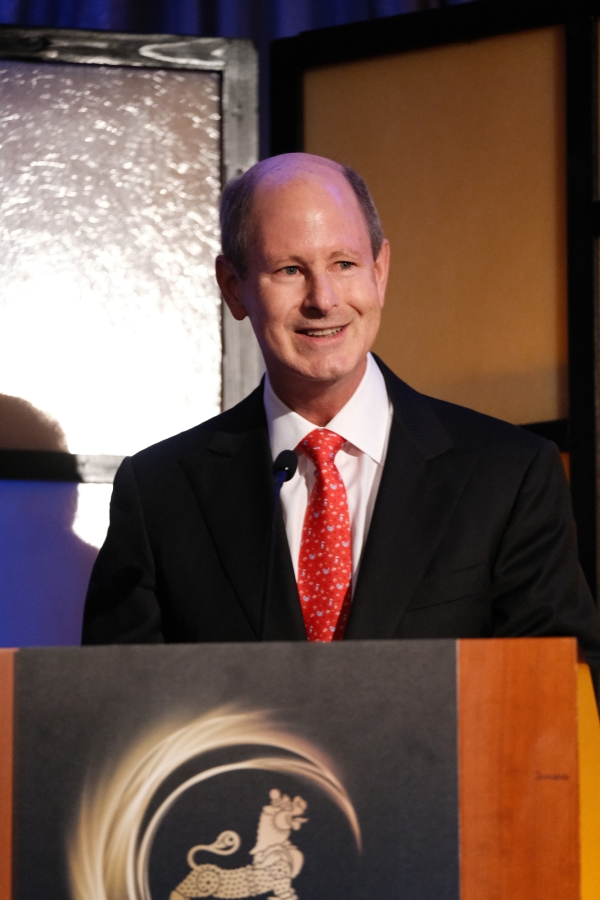 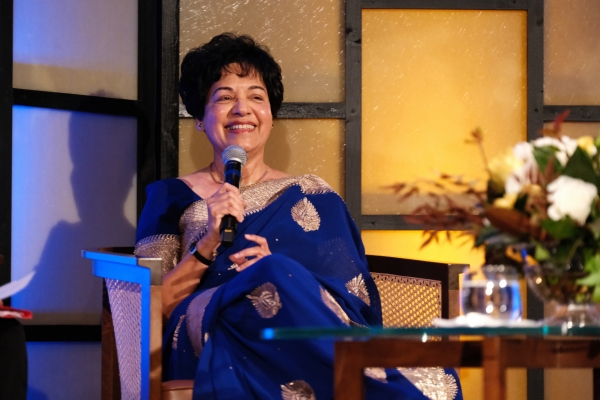 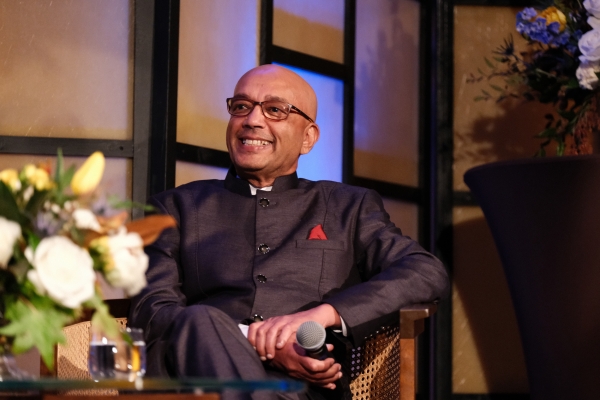 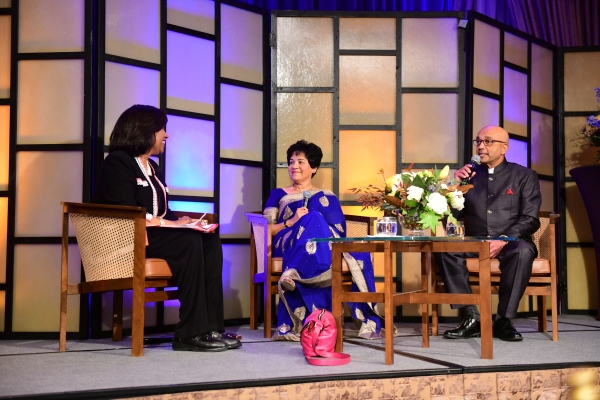 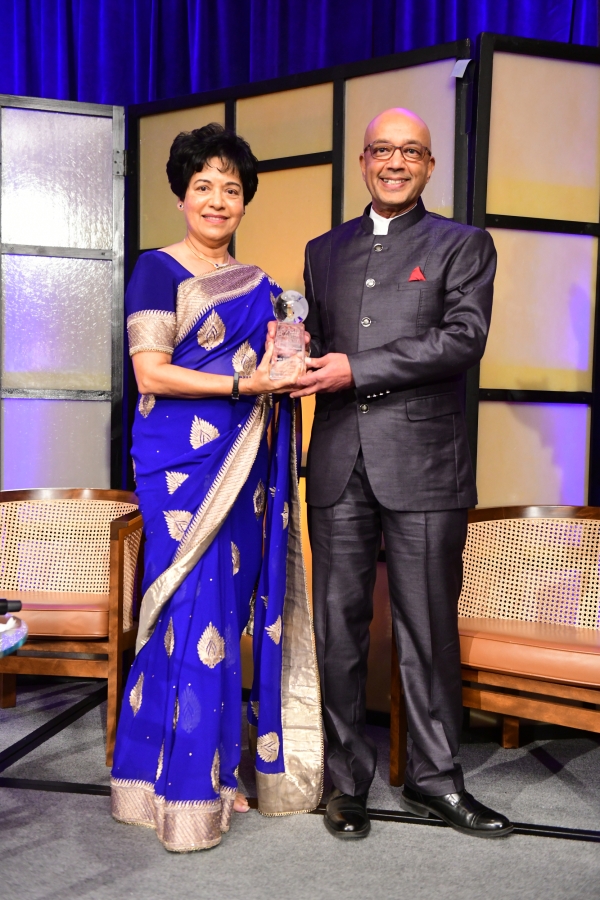 Honorees Dr. Marie and Vijay Goradia, with the Huffington Award. 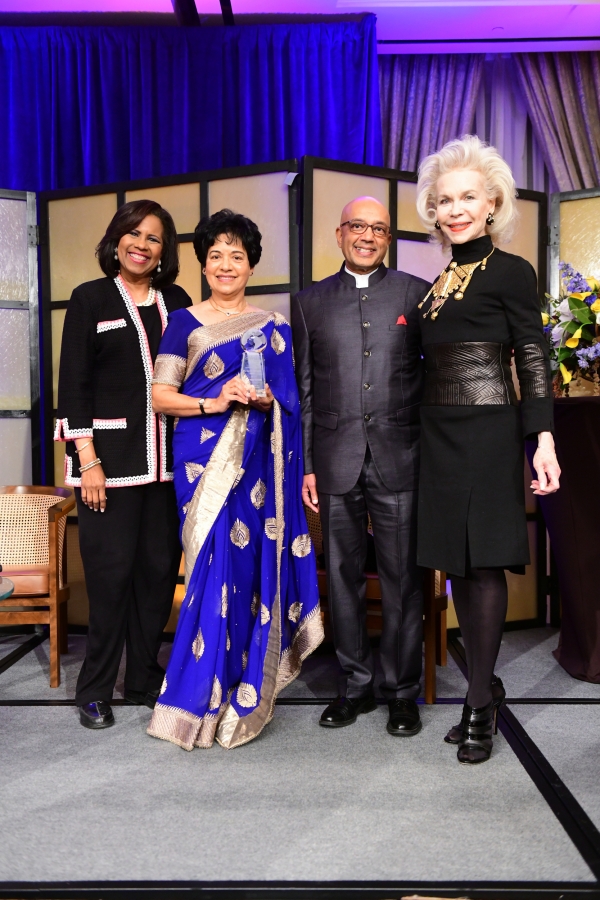 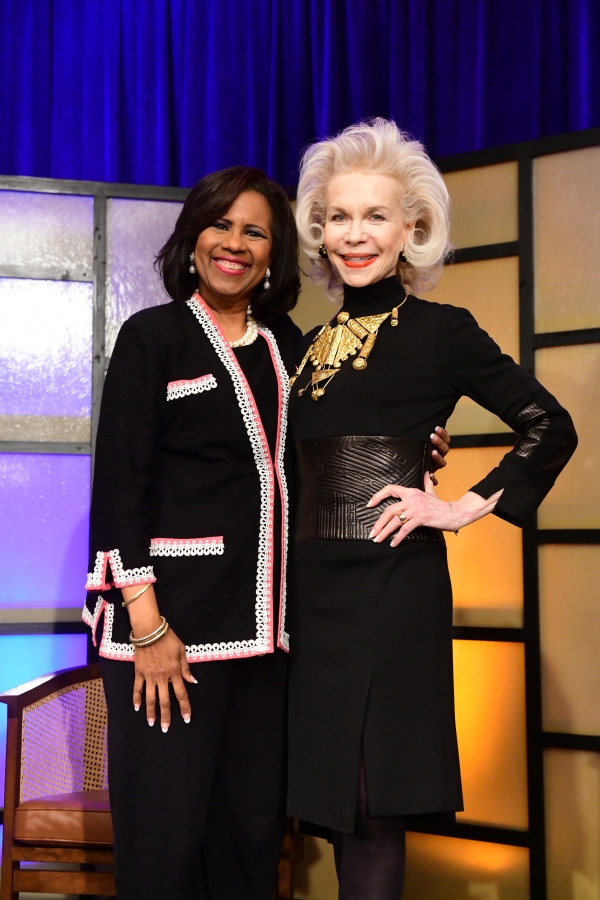 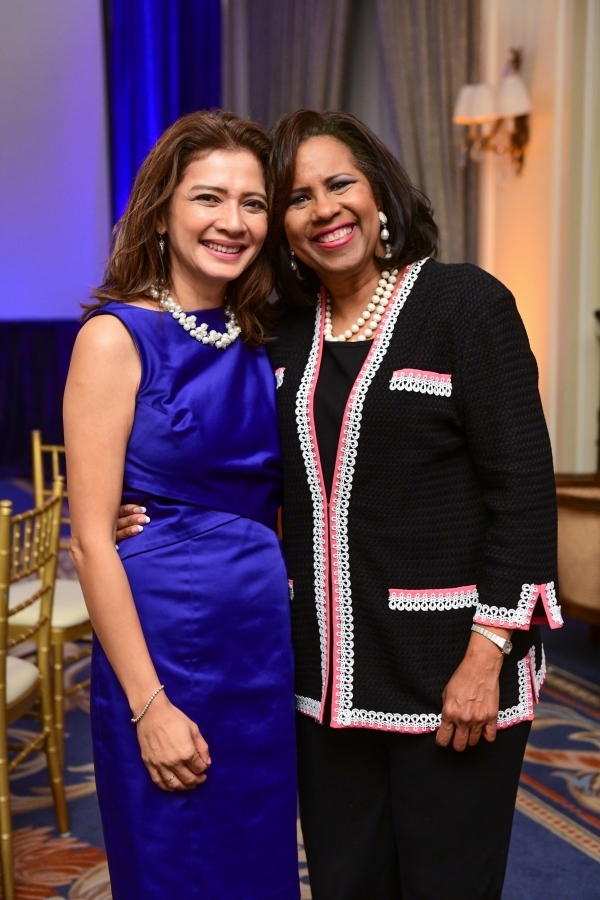 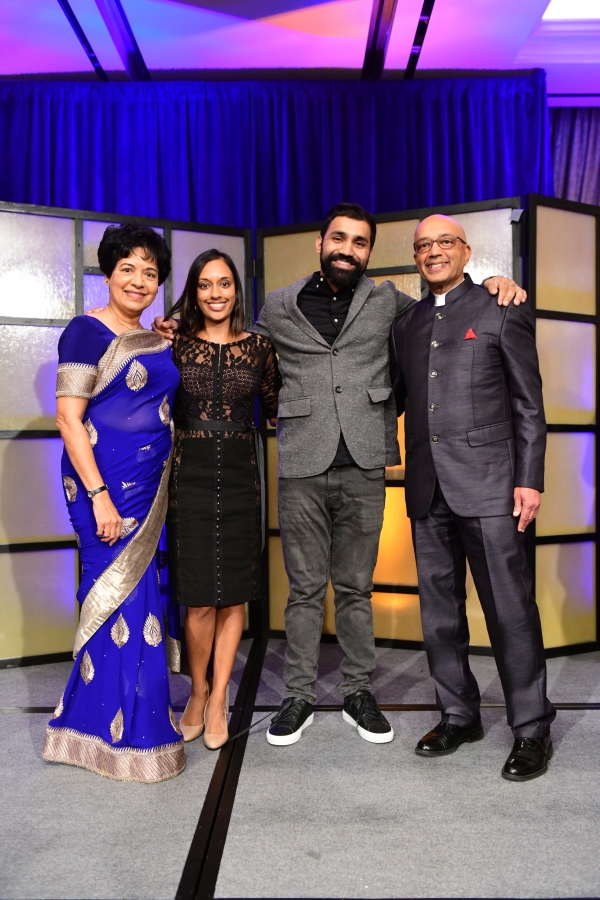 Honorees Dr. Marie and Vijay Goradia, with their children Sapphira and Kevin.

After dinner, KTRK Channel 13 anchor Melanie Lawson moderated a discussion with the Goradias about their life stories and their dedication to advancing educational and healthcare issues around the world. Both were raised in humble circumstances in India and came to the U.S. in the 1970s. Soon after emigrating, Vijay founded Vinmar International, a global petrochemical trading and marketing company which recently tallied over $4 billion in annual revenue. While back in India on a business trip in 1999, he was inspired by the educational interventions he saw being implemented by a charity called Pratham (meaning “first” in Hindi), and he founded Pratham USA, which supports the work being done in India for underprivileged children. Additionally, Vijay has been involved with similar U.S. initiatives, such as the American India Foundation. When asked about his philanthropic inspiration, he responded, “My parents taught me empathy and sympathy, thus giving back to the society we adopted was a natural thing to do… it is fulfilling to give back to those less fortunate.”

Marie, who earned advanced degrees in biochemistry and molecular biology from Bombay University, journeyed to the U.S. to do scientific research. Her current portfolio is wide-ranging, including becoming a distinguished toastmaster, ballroom dancer, and an active community volunteer. In addition to Asia Society, Marie has been deeply engaged with the MD Anderson Cancer Center, among other organizations. Like her husband, she shared her reasons for giving back to the community, saying, “[Philanthropy] is important because you never have the opportunity to thank everyone who helped you in the past, but we can pay it forward and help provide a better life for those who have less.”

This was the first Huffington Award to be presented in a dinner format since Asia Society opened its new Museum District headquarters in 2012. In recent years, the program has been a luncheon with a predominantly business-centric focus, whereas the dinner setting heightened the event’s gravitas and ambiance. The 400 guests enjoyed musical accompaniment during dinner by Divisi Strings, floral arrangements by Lanson B. Jones & Co., and an elegant dinner including arugula salad with dried cherries and crumbled feta, BBQ-glazed wild salmon, and delectable chocolate desserts.

The Huffington Award recognizes leaders who have been a major force on the international stage. Named for the Houston oilman and former ambassador who played a leading role in creating Asia Society Texas Center, the Roy M. Huffington Award is the highest honor bestowed by the Texas Center. Prominent former recipients include President George H.W. Bush; former Prime Minister of Australia, the Honorable Kevin Rudd; former U.S. Secretary of the Treasury and U.S. Secretary of State James A. Baker III; former Governor of Utah and U.S. Ambassador to the People’s Republic of China Jon Huntsman Jr.; former ExxonMobil CEO and U.S. Secretary of State Rex Tillerson; and President of Rice University David Leebron.