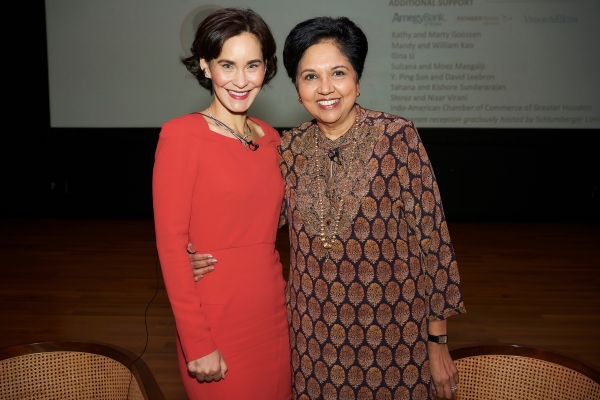 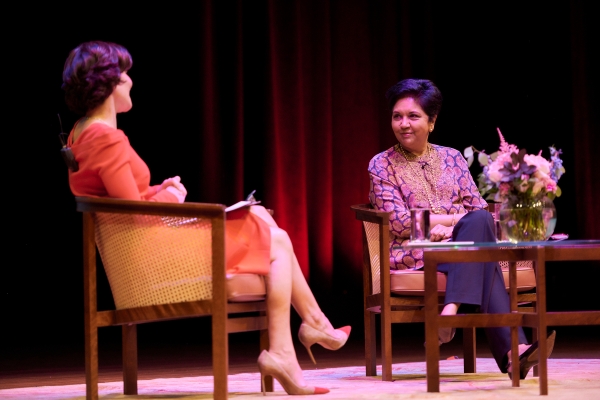 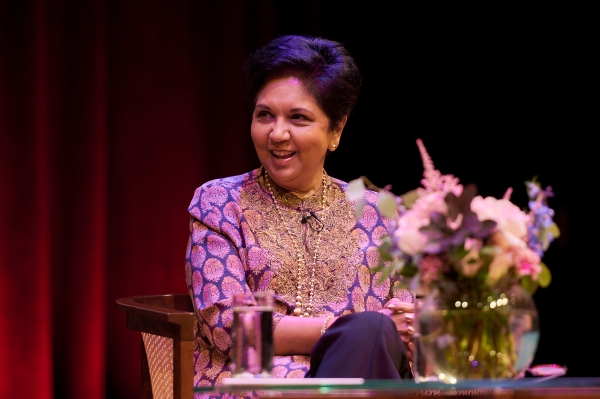 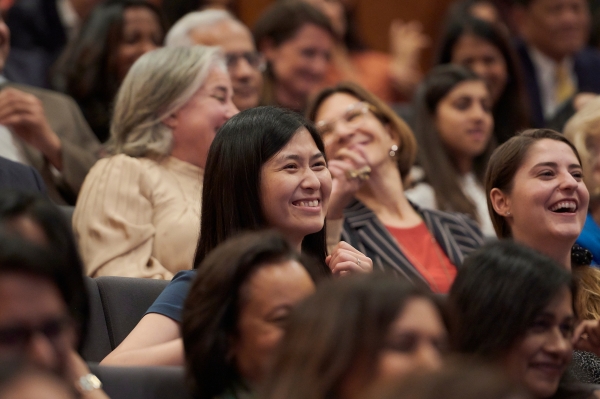 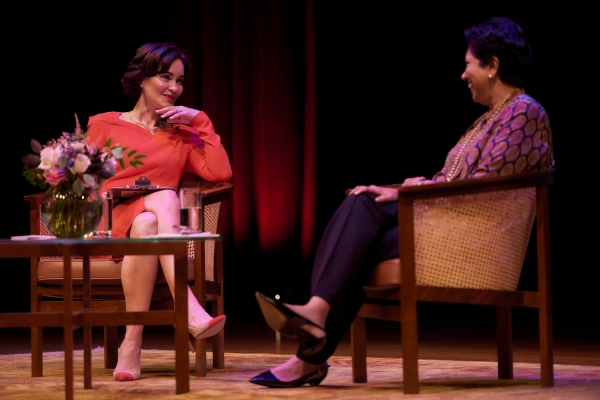 HOUSTON, October 7, 2019 — Former PepsiCo Chairman and CEO Indra Nooyi received an enthusiastic welcome from a sold-out program as Asia Society Texas Center launched its fifth year of the Bank of America Women’s Leadership Series. In conversation with Laura Arnold, co-chair of Arnold Ventures, Nooyi spoke about her time at the helm of PepsiCo, the journey that brought her there, and the steps she believes are needed to elevate more women into high-level leadership positions.

Nooyi began the conversation where she began her journey – in Madras (now Chennai), India. As she recalled playing guitar in an all-female rock band, joining one of the first women’s cricket teams at the collegiate level, and becoming one of five women out of 200,000 test takers selected for the Indian Institute of Management, it became clear to the audience that Nooyi has been breaking ground and overcoming barriers since the beginning.

After coming to the U.S., Nooyi faced new challenges that she characterized as balancing work and family as well as adapting to a new culture — both in the country and in the workplace — as a woman, a person of color, and an immigrant. She attributed much of her success to the strong support she received from her extended family and the mentors who advocated for her in her career, including former PepsiCo CEO Wayne Calloway.

Nooyi discussed Performance with Purpose, an initiative she launched during her tenure as CEO that focused on diversifying the portfolio to healthier products based on research showing a growing consumer trend away from foods high in fat, sugar, and salt. Nooyi also steered the company toward limiting its environmental footprint, which she explained was both doing the right thing and pursuing sustained growth for the company.

Now one of the world’s most influential women in business, Nooyi emphasized the need for support among women to bring more women into the C-suite. In her view, the talent base exists, but the pipeline is broken in raising a substantial number of women in entry-level positions to high-level executive positions. In addition to acknowledging the reality of unconscious bias, Nooyi said one concrete solution is widespread, significant investment in early childcare to better support women transitioning back into the workforce.

The Women’s Leadership Series (WLS) is chaired by Dr. Anne Chao, and programming focuses on women who are making a substantive impact in society and business. The series provides a platform for influential women of Asian descent, as well as women engaged in leading efforts reflected in the Asia Society mission of diversity and inclusion, to share their personal and professional experiences.

Indra Nooyi is the former Chairman and CEO of PepsiCo. As CEO, Indra was the chief architect of Performance with Purpose, PepsiCo’s pledge to do what’s right for the business by being responsive to the needs of the world around us. As part of Performance with Purpose, PepsiCo was focused on delivering sustained growth by making more nutritious products, limiting its environmental footprint and protecting the planet, and empowering its associates and people in the communities it serves. Additionally, she directed the company’s global strategy for more than a decade and led its restructuring, including the divestiture of its restaurants into the successful YUM! Brands, Inc. She also led the acquisition of Tropicana and the merger with Quaker Oats that brought the vital Quaker and Gatorade businesses to PepsiCo, the merger with PepsiCo’s anchor bottlers, and the acquisition of the Russian company Wimm-Bill-Dann, the largest international acquisition in PepsiCo’s history. Prior to becoming CEO, Indra served as President and Chief Financial Officer beginning in 2001, when she was also named to PepsiCo’s Board of Directors. Previously she also served as Senior Vice President and Chief Financial Officer of PepsiCo; as Senior Vice President, Corporate Strategy and Development; as well as PepsiCo’s Senior Vice President, Strategic Planning.

Before joining PepsiCo in 1994, Indra spent four years at Asea Brown Boveri, a Zurich-based industrials company, where she was part of the top management team responsible for the company’s U.S. business as well as its worldwide industrial businesses. She has also worked for Motorola, where she was Vice President and Director of Corporate Strategy and Planning, having joined the company as the business development executive responsible for its automotive and industrial electronic group. Prior to Motorola, she spent six years directing international corporate strategy projects at The Boston Consulting Group. Her clients ranged from textiles and consumer goods companies to retailers and specialty chemicals producers. Indra began her career in India, where she held product manager positions at Johnson & Johnson and Mettur Beardsell, Ltd., a textile firm.

Indra has received many prizes, accolades, and honorary degrees over the years. In 2007, the Government of India awarded her the Padma Bhushan, the country’s 3rd highest civilian honor. In 2007, she was named an “Outstanding American by choice” by the U.S. State Department. She holds a B.S. from Madras Christian College, an M.B.A. from the Indian Institute of Management in Calcutta, and a Master of Public and Private Management from Yale University. Indra is married and has two daughters.

Laura E. Arnold is Co-Chair of Arnold Ventures. The philanthropy’s core mission is to invest in evidence-based solutions that maximize opportunity and minimize injustice.

Until late 2006, Laura was Executive Vice President and General Counsel of Cobalt International Energy, L.P. in Houston, Texas. Prior to that, she was a mergers and acquisitions attorney at Wachtell, Lipton, Rosen and Katz in New York, New York.

Laura has a J.D. from the Yale Law School, an M.Phil in European Studies from the University of Cambridge, and a B.A. from Harvard College. After law school, she clerked for the Hon. Judith W. Rogers in the U.S. Court of Appeals for the District of Columbia Circuit. Laura currently serves on the Stanford PACS Advisory Board and is a founding partner of the REFORM Alliance.