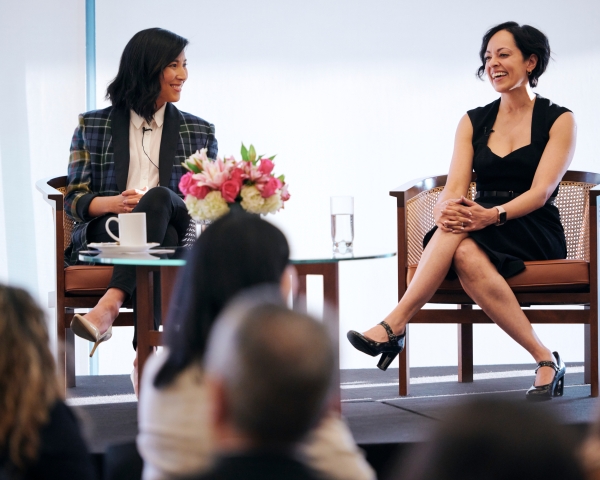 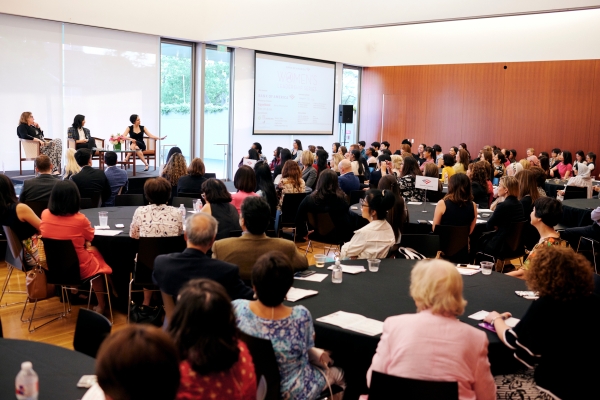 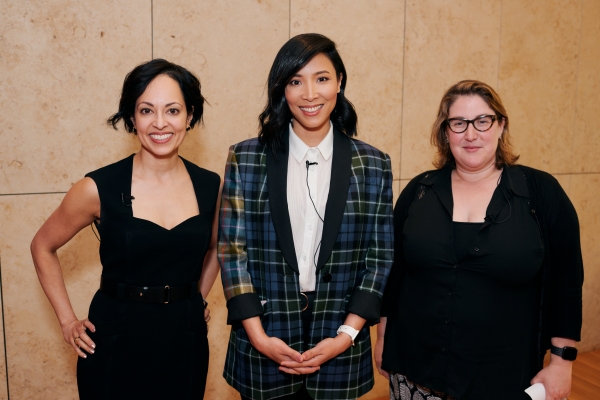 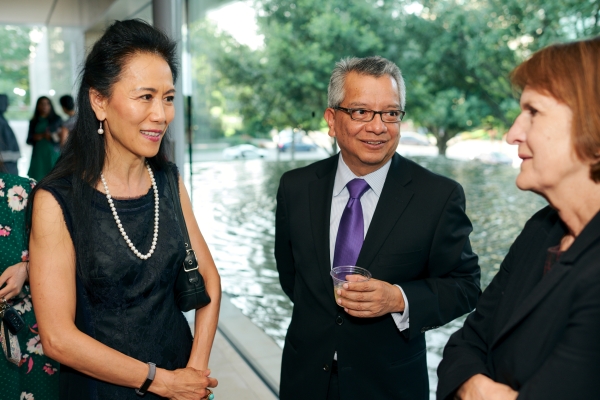 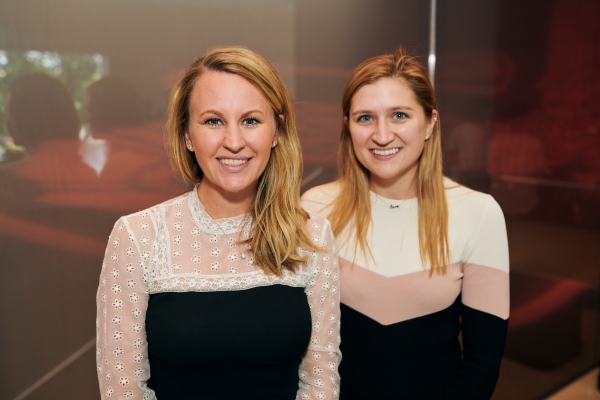 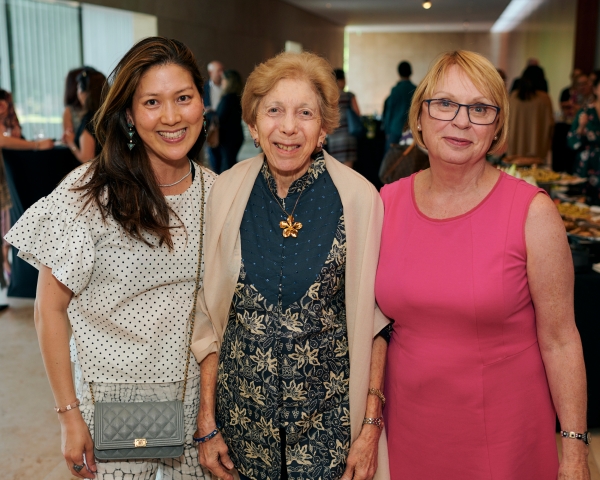 The actors shared their life journeys, including what compelled them to switch from careers in vastly different fields to acting. Cerda worked in advertising before pursuing acting, and Shaw was a rocket scientist in a previous life. While both women said they were passionate about the arts from an early age, they said their parents insisted that they earn degrees with hard skills before pursuing their passion in acting. They added that the time they spent in other professional fields prepared them for their future careers in acting, particularly the power of discipline, collaboration, and teamwork.

Sharing their personal experiences, Cerda and Shaw addressed the challenges they have faced in overcoming stereotypes and limited opportunities for Asian actors. Cerda said the roles that are typically offered are stereotypical Asian roles such as the dry cleaning worker, neighbor, or an upscale customer. Shaw reiterated that more specific roles can also reflect stereotypes, such as the role of a woman wearing a hijab (head covering) or the wife of a terrorist.

Although Asian Americans are still underrepresented, both women agreed that diversity and inclusion have improved in the entertainment industry, but there is still work to be done. Cerda stated, “It is not the quantity but the quality of the inclusion that matters.” Shaw agreed and added, “There’s a big difference between tokenism and representation with equity.”

The audience had the opportunity to ask the speakers their own questions during the Q&A session. Many members of the audience were students from local universities and high schools, as it is part of the Women’s Leadership Series’ mission to support and uplift the next generation of leaders. Some of the advice that was shared by the actors with the students was to follow their passions, work hard, and be true to themselves.

The Women’s Leadership Series (WLS) is chaired by Mandy Kao and Y. Ping Sun, and the programming focuses on women who are making a substantive impact in society and business. The series provides a platform for influential women of Asian descent, as well as women engaged in leading efforts reflected in the Asia Society mission of diversity and inclusion, to share their personal and professional experiences.

Julee Cerda is an American actress born in South Korea to a Korean mother and a Dominican father. She was raised in New York and spent part of her childhood in her father's country, the Dominican Republic, and speaks fluent Spanish. She received a B.A. in Communications from Marist College and started off with a career in advertising before switching to acting. She was most recently seen in the Broadway revival of Children of a Lesser God directed by Tony Award winner, Kenny Leon. On television, she has guest starred on Netflix’s Iron Fist, Showtime’s Homeland, and has made countless other appearances on hit shows like Orange is the New Black, House of Cards, Billions, and Kevin Can Wait. Some of her film credits include the upcoming Joker with Joaquin Phoenix, The Intern, and Passengers. Julee is also a writer, producer, and a mother to her 4 year-old daughter.

Salma Shaw, born in Scotland to South Asian parents and raised all over the Midwest, is a versatile actor and singer in New York City, but in a previous life, she was a rocket scientist. A two-time Helen Hayes Award recipient, Salma began her career in DC in theater, including as the Managing Director and COO of acclaimed physical theater troupe Synetic, producing 20 shows that garnered 30 Helen Hayes Nominations and nine Awards. Since transitioning to New York, Salma has steadily worked in TV, booking network roles on the 2018 CBS pilot Main Justice, Dick Wolf’s FBI and Law & Order: SVU, The Path, and Blue Bloods, among many others; she is also a series regular role on Here TV's People You Know streaming on Amazon. A skilled singer and linguist, Salma recently performed leading roles on stage, including in Brave New World Rep’s A Muslim in the Midst, the New York Times Critic’s Pick This Time, the Off-Broadway production of Acquittal, the original cast of Bill Sherman and Quiara Alegría Hudes’ Barrio Grrrl! at The Kennedy Center, and the 29-hour reading of Broadway-bound Monsoon Wedding. Apart from the arts, Salma loves technology and is passionate about education, and she is currently pursuing her PhD in Business Administration and helping others reach their own educational goals as a leading MBA admissions consultant to the world’s top business schools. She holds a Bachelor's degree in Mechanical Engineering from Stanford University, a Master's in Aeronautics and Astronautics from MIT, and an MBA from Harvard Business School. She considers her greatest role to be that of “Mom” to her six-year-old son.

Julie Schubert is an Emmy Award-winning casting director based in New York. Select film and TV credits include: House of Cards (Emmy Award for Outstanding Casting); Night Comes On (Sundance award winning feature), Deliver Us From Evil; Marvel's The Punisher; Marvel's Daredevil; Marvel's Jessica Jones; Marvel's Luke Cage; Marvel's Iron Fist; Marvel's The Defenders; Mindhunter; Confessions of a Shopaholic, among others. Schubert graduated from New York University and trained under casting directors Juliet Taylor, Ellen Lewis and Denise Chamian, among others. She is currently working on two series and a feature film.

With 13 locations throughout the world, Asia Society is the leading educational organization

promoting mutual understanding and strengthening partnerships among the peoples, leaders, and institutions of Asia and the rest of the world. Asia Society Texas Center executes the global mission with a local focus, enriching and engaging the vast diversity of Houston through innovative, relevant programs in arts and culture, business and policy, education, and community outreach.