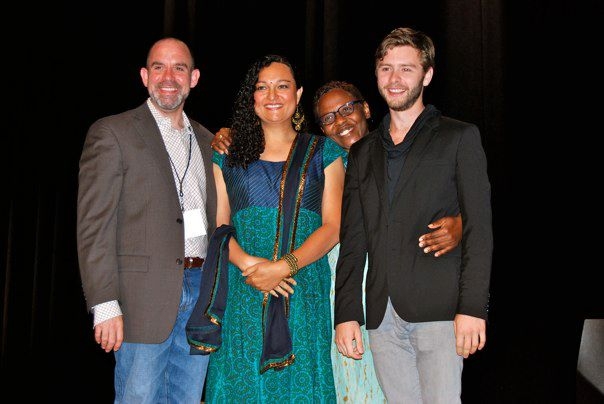 HOUSTON, July 28, 2012 — Houstonians gathered at Asia Society Texas Center to watch two powerful documentaries—Wariazone and Rites of Passage—exploring gender and identity in Asia. The screenings were presented as part of QFest’s new “Focus on Asia” program.

The highlight of the event was the post-screening conversation with Rites of Passage director, Jeff Roy, and star, Maya Jafer. Moderated by John Bradshaw, Jr., Asia Society Texas Center's Director of Development, community members were invited to take part in the lively discussion.

Roy explained that the goal of the film, which took shape when Roy approached Maya with the idea of documenting her journey for an academic research article, was to raise awareness about the realities transgender people face around the world by telling the story of one individual who has endured a lot to be who she truly is. Maya’s story is honest, truthful, and moving. She shared, with frankness, the difficulties of the gender reassignment process and how she is “still learning what it means to be a woman—socially, spiritually, physically, emotionally, mentally, and otherwise.” However, it is clear Maya has never been happier. “One by one all fears got addressed, and while some of them remained facts, they were not as daunting…what became much more important, what overpowered the fears, what reduced the fear, and what made me feel stronger was the fact that I was now able, for the first time in my life, to say that I love my god, and my god loves me no matter what.”

The feature length film from which Rites of Passage was produced, Mohammad to Maya, is set to make its world premiere at the Toronto International Film Festival and its Houston debut at Asia Society Texas Center later this year. To learn more, please contact Patsy Brown at 713.496.9901 or PBrown@AsiaSociety.org.