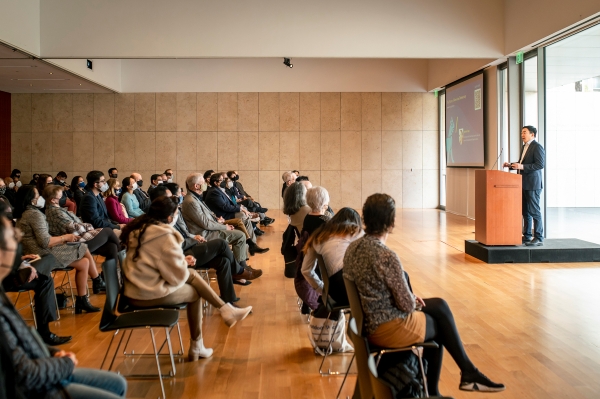 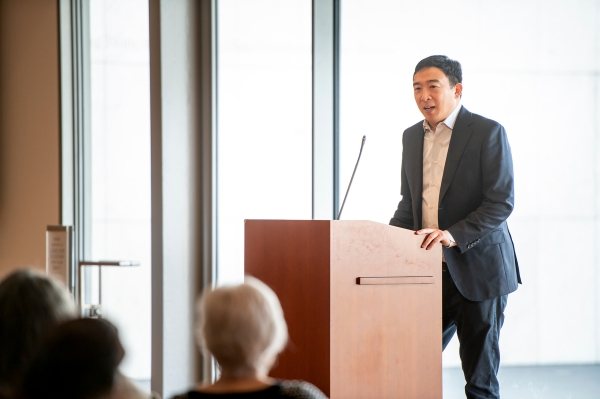 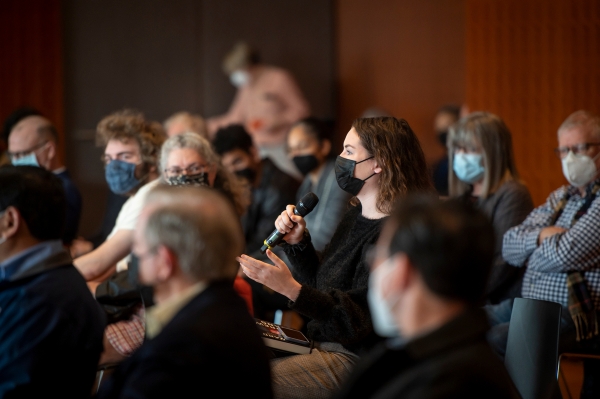 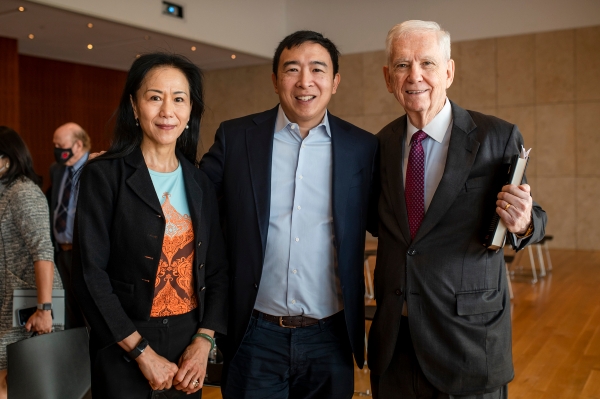 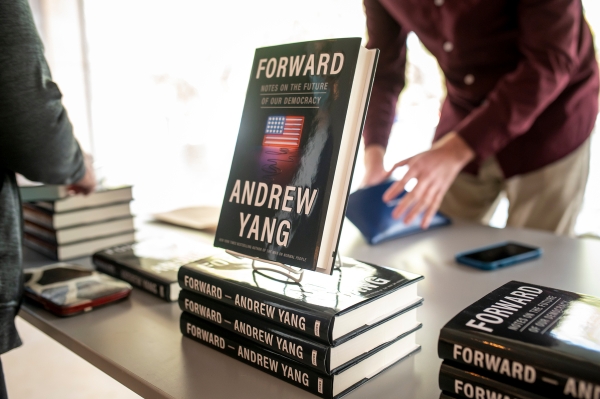 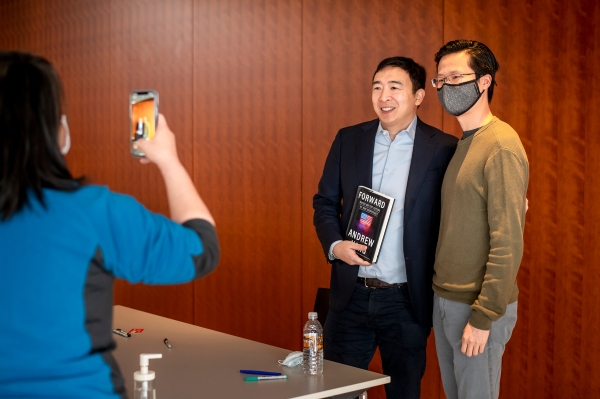 HOUSTON, January 20, 2022 – In a special morning program at Asia Society Texas, former Democratic presidential candidate and New York City mayoral candidate Andrew Yang spoke to an engaged audience about his journey into politics, what he learned from his experience, and his plans for his new Forward Party. Following his keynote remarks, Yang took questions from the audience and signed copies of his new book, Forward: Notes on the Future of Our Democracy, which were available onsite from partner bookseller Brazos Bookstore.

Journey from tech to politics

Yang spoke frankly about how he left corporate law after only five months, after he realized he did not wish to make his career in that field. He founded Venture for America, an education startup designed to connect rising young entrepreneurs with cities where he saw opportunities for them: Detroit, New Orleans, Kansas City, and others. Yang said he got into politics in part because he was seeing a transformation of the economy, driven by automation that would impact nearly 50 percent of U.S. jobs, and, through his work with Venture America, he believed he had a sense of the concerns and needs of the people who would be most affected.

Yang called himself “an accidental politician” who has had to adapt to compete. He acknowledged that when he declared his candidacy for the U.S. presidency in 2018, he was a fairly anonymous civilian – even some of his friends and relatives were skeptical of his ambitions. But one of Yang’s goals was to get an Asian American man in the presidential debates, partly for his own children to see that representation on the national stage, and he succeeded. He also remarked on how his supporters, known as the "Yang Gang," represented a diverse group of people from different backgrounds who often had not previously been engaged in politics.

Diagnosing the problem and finding a solution

All politics are tribal, said Yang, but “other Americans are not our enemy.” Rather, he explained that our enemy is a political system that incentivizes division and polarization. Yang pointed out that because recent redistricting ensures that 90 percent of congressional districts remain safely Republican or safely Democratic, incumbents have become less willing to compromise to reach solutions – which puts them at risk of facing a primary challenger. In Yang’s view, politicians are currently rewarded for keeping problems around rather than solving them. In fact, he said, fighting for a solution is considered inflammatory, divisive, or irrational.

Yang’s proposed solution would change the incentive structure, he said, pointing to Alaska as a model. The state recently changed its primary system to allow for nonpartisan open voting, unrestricted by party, and also implemented ranked choice voting. Yang explained that this model allows senators to be accountable to the whole population of their state – their full constituencies, rather than a select portion – and thus incentivizes senators to act on their principles and convictions without fear of facing a primary challenger. According to Yang, 24 states could adopt this new system through a ballot initiative instead of relying on Congress or state legislatures to pass new laws. He estimated that the total cost for these ballot initiatives across the 24 states is $200 million – a worthy investment in Yang’s view in the future of American democracy.

The COVID-19 pandemic has in many respects sped up trends toward automation, according to Yang, who pointed to companies that are delaying returns to offices – and in some cases eliminating in-person offices altogether. In turn, Yang said he is currently organizing to grow his Forward PAC into the Forward Party, in order to put his ideas into action. He spoke on his desire to end poverty and his belief in finding solutions that appeal to people’s values rather than their politics. A little humor, he added, was also very effective in helping spread the message.

Asia Society Texas believes in the strength and beauty of diverse perspectives and people. As an educational institution, we advance cultural exchange by celebrating the vibrant diversity of Asia, inspiring empathy, and fostering a better understanding of our interconnected world. Spanning the fields of arts, business, culture, education, and policy, our programming is rooted in the educational and cultural development of our community â€” trusting in the power of art, dialogue, and ideas to combat bias and build a more inclusive society.