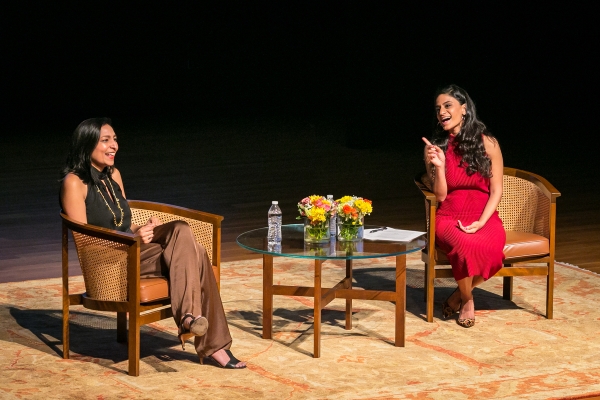 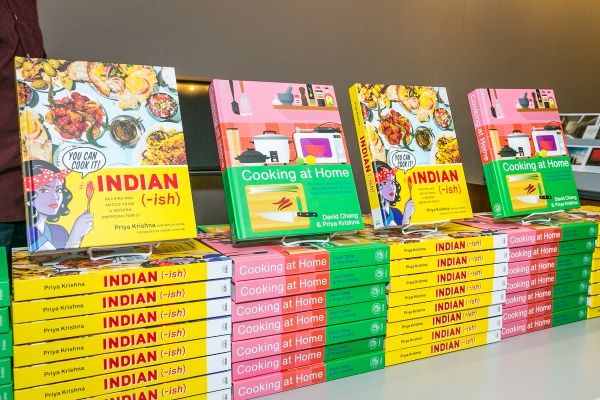 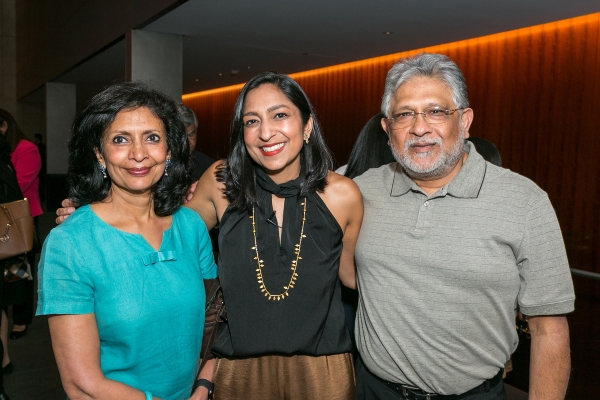 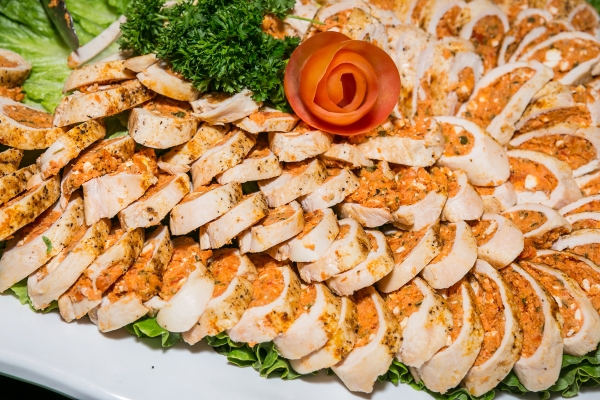 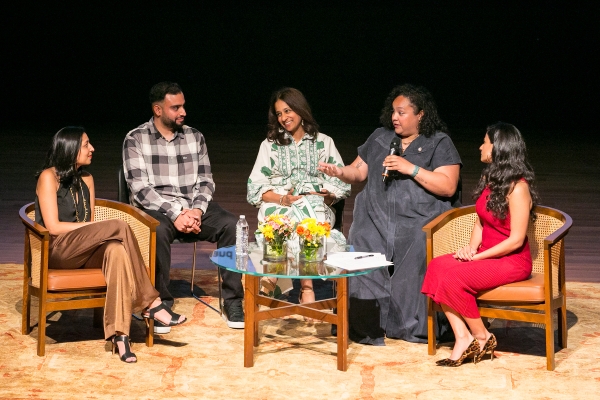 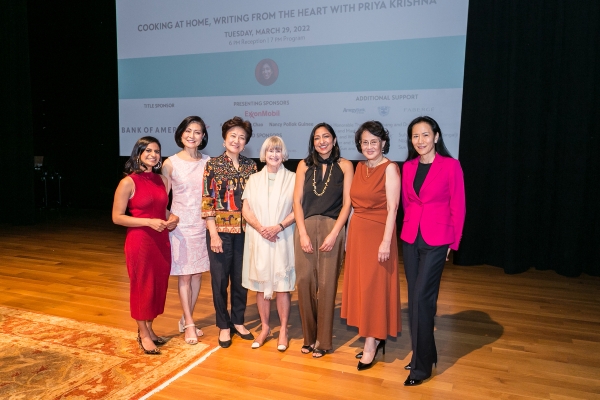 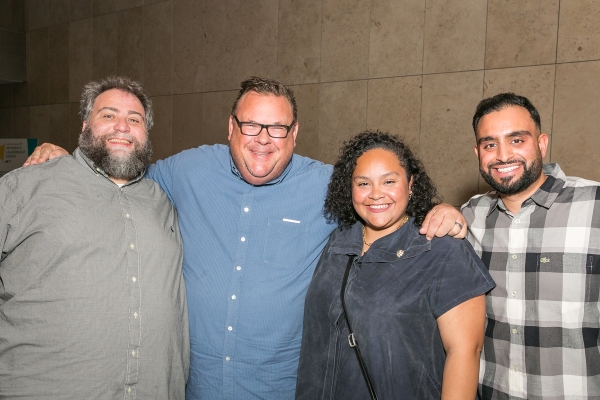 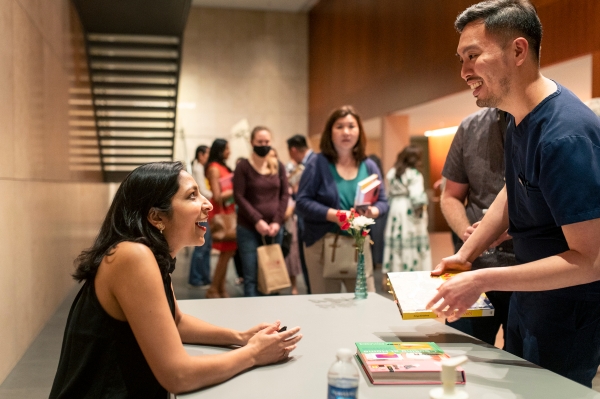 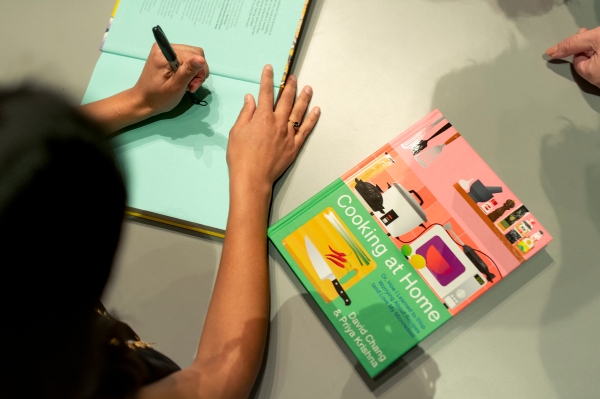 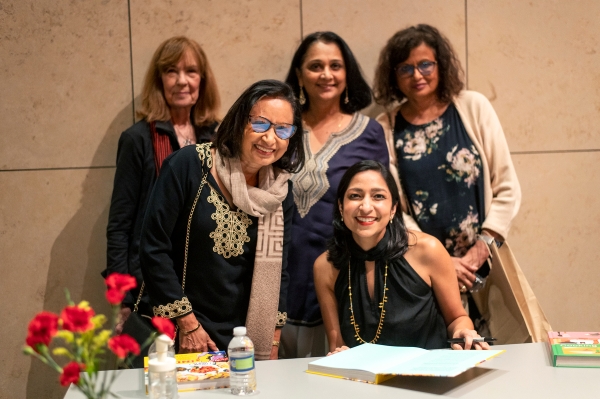 How her mother’s cooking shaped her identity

Krishna began by describing what it meant to grow up “Indian-ish,” as an immigrant child whose family is originally from India but who grew up in the United States. She shared that she — like many other immigrant children from other backgrounds — feels that  she occupies that middle space as a third-culture kid, where she doesn’t quite fit in here in America as well as India. Krishna said much of her tastes as an adventurous, curious eater was shaped by her mother’s cooking during her childhood in Dallas. Her mom never followed a recipe but cooked on intuition, Krishna said, by incorporating the food and ingredients both from her Indian heritage and from what was around and available: “You find that you can put feta in saag paneer and it tastes really, really amazing!”

Through her mother, Krishna said, she was exposed to food and cooking from a young age — helping in the kitchen, being creative, and making mistakes — which has shaped her identity today, both personally and professionally. In her personal life, Krishna confessed she constantly thinks about what to eat for her next meal and will research cuisines and restaurants before traveling. In terms of her career, Krishna shared that reporting on food has allowed her to write about everything from politics to religion to sports, because food intersects with all of those topics. Some of her favorite experiences include tailgating at a Tennessee Titans football game with Kurdish refugees and visiting a nudist resort to learn how they cook sans clothing.

Being a South Asian woman in food journalism

When asked about her career path, Krishna said it is persistence that got her to where she is today. In college, she knew she wanted to work in food but didn’t know what jobs were available, so she sent 50–60 cold emails to people in the industry before landing an internship and then a customer service job. Krishna said that experience taught her how to speak to strangers and put them at ease, which helped set her up for success as a journalist. She also strongly encouraged students to begin freelancing while in school to build up experience and have work samples to submit.

Krishna acknowledged the challenges of being a South Asian woman in the food industry, where she noted out her white male colleagues frequently make double or triple — even 10 times — what she’s making while doing the same work. When pitching her Indian-ish cookbook, she said she heard from publishers that they had already published an Indian cookbook within the last year — as if all Indian food is the same and they had already met a quota. To Krishna, this is why different perspectives in food journalism are so vital, to help dispel the myths and stereotypes associated with so-called “ethnic” cultures, and to normalize the experiences and cuisines of non-white audiences.

But she is also encouraged by recent progress, noting that South Asian women in the industry know and support each other and work hard to help the next generation follow in their footsteps by sharing resources and advice. Krishna strongly advocated for pay transparency and thoughtful engagement with recipe and content creators, whether on social media, through established sites like The New York Times, or published cookbooks. She asked the audience to think about their individual actions — such as paying attention to who is writing which recipes or cookbook — which she said can translate to collective power and help transform the industry.

What’s next for the industry and for herself

In contemplating the future of the food industry, Krishna touched on the impact of COVID-19. She said the pandemic underscored the need for restaurants to reconsider their operating model’s overreliance on cheap labor, and said small steps forward could include new ways to offer healthcare and 401(k)s to employees or new plant-based entrees that could reduce costs. For herself, Krishna said her next project is a children’s cookbook of global recipes, because she thinks kids should have the opportunity to explore a wide range of cuisines and cooking from hummus to dumplings to bibimbap.

Krishna concluded the program with a special question-and-answer session with Houston locals — Evelyn Garcia, a Houston chef on the current season of Top Chef; Abbas Dhanani, a food influencer who runs popular Instagram account @houstoneatz, and Anu Lal, a Priya Krishna fan who uses her recipes in her daily cooking — before a general audience Q&A.

When asked where Houston ranked as a food city against the rest of the country, Krishna diplomatically enthused over the sheer diversity of climate, produce, and food identities of Texas’ cities, from San Antonio to El Paso to Dallas to Houston to Austin. To cheers, she concluded, “I think that Texas as a state is the best place to eat in America personally.”

Priya Krishna is an Indian-American food journalist and YouTube personality. She is a food reporter for The New York Times and has previously contributed to The New Yorker, Eater, and TASTE (as a columnist). She is also the author of multiple cookbooks, including Indian-ish, a cookbook she wrote along with her mother. Krishna previously worked for Bon Appétit and appeared on their popular YouTube channel from 2018 to 2020. Before that, she also worked in the marketing department of Lucky Peach, a food magazine established by David Chang. More recently in 2021, she has also written a cookbook together with Chang titled Cooking at Home: Or, How I Learned to Stop Worrying About Recipes (And Love My Microwave). Krishna was raised in Dallas, Texas. Her parents emigrated from India to the United States in the 1980s. Krishna attended Dartmouth College where she was a double major in government and French and graduated in the class of 2013.

Pooja Lodhia joined KTRK and the ABC13 Eyewitness News team as a general assignments reporter in the spring of 2012. Before making her leap to Houston, she reported at Eatel News Magazine in Baton Rouge; WLUC in Marquette, Michigan; and WFTX in Fort Myers, Florida. Some of her most memorable stories include covering final space shuttle launch in Cape Canaveral, Hurricane Isaac in New Orleans, and a moose on the loose in Michigan. She truly believes that every person has a story worth telling, and she's honored to be able to do so. Pooja was born and raised in Baton Rouge, Louisiana and has family here in Houston. She has degrees in English Literature and Journalism and a minor in Modern Dance from Emory University in Atlanta.