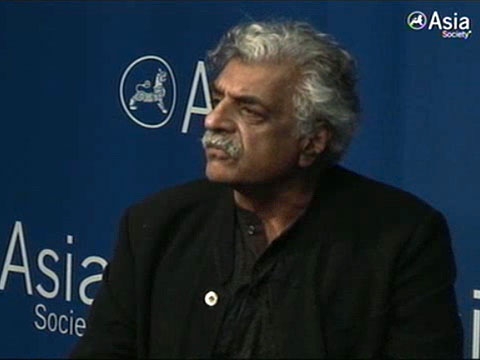 NEW YORK, September 17, 2010 — The Bush and the Obama administrations mishandled the wars in Iraq and Afghanistan, said author Tariq Ali, speaking about his new book, The Obama Syndrome.

In a conversation with Joel Whitney, editor-in-chief of Guernica, at Asia Society's New York headquarters, Ali offered a withering assessment of U.S. policy in the Middle East and South Asia.

Starting in Iraq, U.S. policy under Bush and Obama has failed, said Ali.

Whether intentionally or not, the U.S. military action in Iraq has divided the population. Citing a figure of 5.5 million children orphaned by the invasion, Ali called on the audience to imagine the war’s impact on Iraqi society.

Asked to comment on the future of Iraq, Ali was grave. Division brought on by the war has had the unwanted effect of increasing the influence of Iraq’s neighbors.

“The key to Iraq is what role Iran is going to play,” Ali said. "They [the U.S. military] have handed it over to the Iranians."

Ali is troubled that Obama has continued Bush’s policies, starting with the retention of Robert Gates as Secretary of Defense. On the Afghanistan front, Ali stated that there are eight to ten times more drone attacks now than were carried out under Bush.

While military activity has intensified, the rhetoric in Washington remains out of touch, according to Ali.

"On the very day when a U.S. drone attack kills 50 people in the frontier region of Pakistan ... a moist-eyed president [Obama] appears on the White House lawn talking about one Iranian woman killed during elections there. There is no mention of the attack at all." said Ali.

This insensitivity has carried over to U.S. interventions in regional politics.

The U.S. has abetted what Ali characterized as institutional corruption in the governments of Hamid Karzai in Afghanistan and Asif Ali Zardari in Pakistan. These governments have built schools for the wealthy, but in both cases, the rest of country lacks even basic infrastructure, he said.

U.S. and NATO support of the "fat cats" in Kabul and Islamabad has pushed more of the disaffected to join the insurgency, according to Ali. The insurgents then join the army where they are trained by the US military.

Meanwhile, the recent floods in Pakistan have only exacerbated the rich-poor divide. While the floods destroyed the homes of 24 million people, the Pakistani president flew to London purchase a house in a ritzy neighborhood near Hyde Park, said Ali.

Speaking in relation to Zardari's latest trip abroad amidst the floods, Ali said, "it's amazing more [people] don’t turn to religious extremism, but 85 percent of the population is hostile to it."

Ali admits that a large part of the problem in the region is a lack of strong leadership, which leads to instability.

Asked whether the U.S. should fear this instability, Ali was cynical.

"It couldn't be more unstable now," he said.