Two Views on the Changing China

Recap of the conversation between Uli Sigg, the world’s foremost collector of contemporary Chinese art and Kai Strittmatter, journalist and foreign correspondent to China 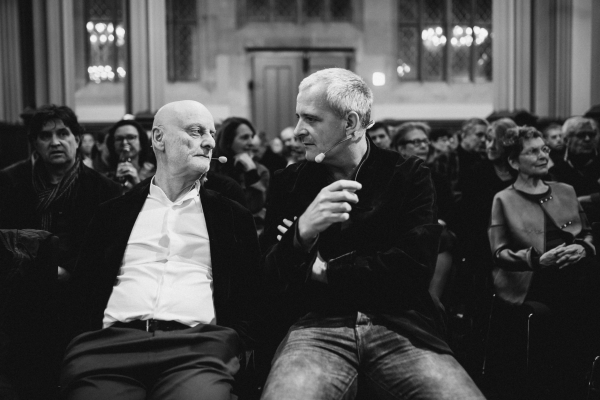 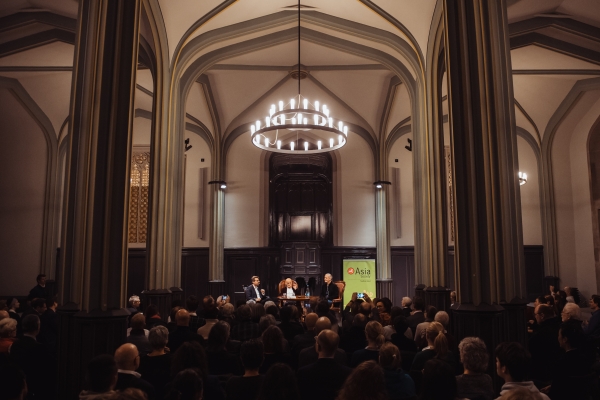 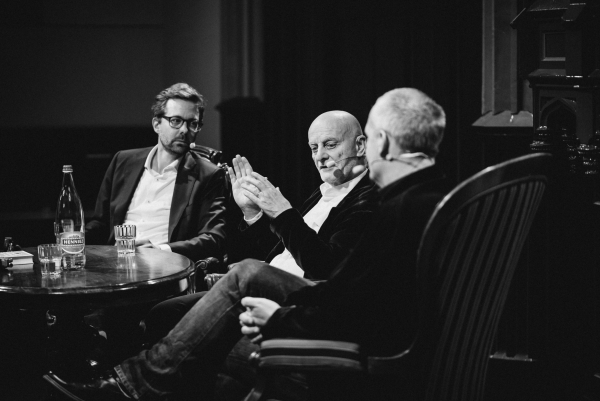 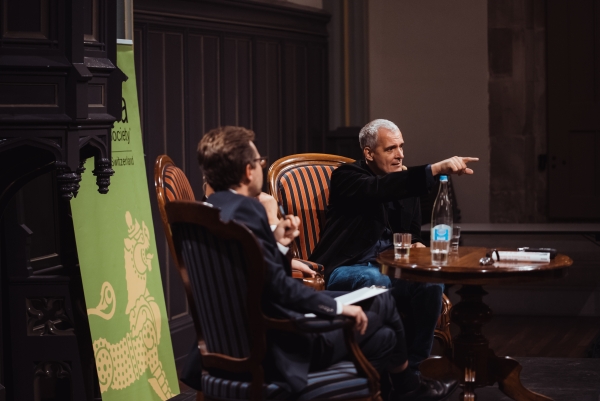 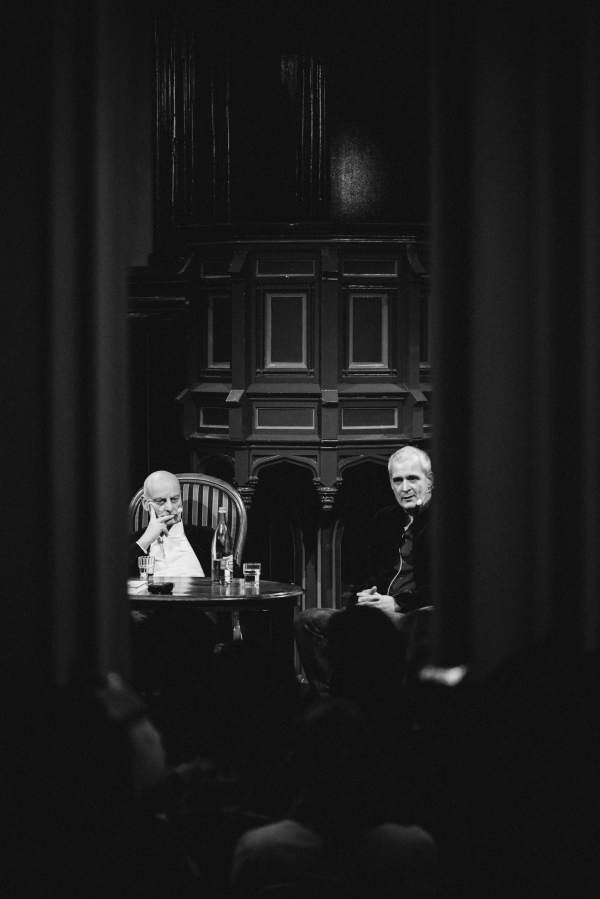 On December 3 2018, at Asia Society Switzerland's last event of the year, 150 people rushed into the chapel of the Helferei in Zurich’s old town. They came to see Uli Sigg and Kai Strittmatter, two generations of China watchers, talking about the changes the country – and above all its citizens – currently go through. Journalist Kai Strittmatter just left China after a good 20 years and sealed that fact with a book called «The Reinvention of the Dictatorship». Uli Sigg started, as he puts it, researching China by starting in the fields of business – by realizing and therefore coining the first joint venture in China in 1980 – and from there went on to the fields of diplomacy and arts. He today is recognized as the world’s foremost collector of contemporary Chinese art.

«The culinary genius!» – Kai Strittmatter’s answer to what has not changed during his time in China was clear: While studying in Xi’an in the mid 1980s he ate «the best noodles in the world. Everyday!» But he also finds the blindness towards China in the west astounding, he still sees only China cheering vs. yellow-danger-alarmism. What has changed a lot in recent years though was that it has gotten harder to find interview partners in China itself. The success of establishing the west as the enemy has had a significant impact on all foreign correspondent’s work, he explained.

Uli Sigg sees the concept of strong man and the calling for one as a constant in Chinese history that also hasn’t withered a bit in all the years he has spent working in and on China. The effects on the Chinese contemporary artists worry Sigg since he sees self-censorship creeping in increasingly among some of them. He detects the reason for it not only in the fact that not everybody is made to be hero, but mostly because the rules are not clearly stated anywhere, so reprimands come arbitrarily and all power lays with the ruler who is Xi Jinping.

As the conversation moved to the current government of President Xi Jinping Kai Strittmatter got his arguing up to speed: Xi has destroyed everything about the reinvention former President Deng Xiaoping had initiated in the late 1970s. Although China has always been a dictatorship, Deng had decentralized power and, through that, Strittmatter said, opened niches for things to develop, for China to become dynamic. That is gone with Xi who holds Marx on his tongue but reestablished a strict Leninist state with a digital update. As a journalist these are the most exciting times Strittmatter has experienced, because so much is happening. But at the same time, it is hard to witness how these «House of Cards»-politics operate with gestures of submission.

Uli Sigg questioned if the claim to Marxism is as empty as Strittmatter assesses. In his view Xi Jinping aims at China taking its righteous place in the world above all: Nr. 1. Sigg sees China becoming the worlds biggest economy only as an obvious result of the country’s sheer size with 1.4 bn people, but that doesn’t mean that Xi is not still building an ideological superstructure over that endeavor. The positioning of China as the counterpart to the West created a vacuum of values that needs to be filled. And in that, Sigg said, Xi is quite successful. Even if the Chinese soft power will struggle to attract people in Switzerland or central Europe – there are still a lot of non-democratic countries in the world whose governments are deeply impressed by the China way of life.

Uli Sigg especially emphasized that one should not be mistaken about the ambitions of what Kai Strittmatter earlier called the «technological upgrade» – also referring to an event Asia Society Switzerland hosted in October on China’s social credit system. «These academics got the facts right, but they did not draw the right conclusions.» Sigg is convinced that against all technological odds the Chinese government will make this system into a nationwide tool to govern and surveillance its citizens in every way one can think of. He also wonders, once it is in place, if it will develop into something like a modern selling of indulgences.

Kai Strittmatter added that in the last two years a lot has happened in China’s technological landscape – so much that he doesn’t doubt that it will implement its plan to become the Nr. 1 industry in artificial intelligence by 2030 successfully. China has the money to spend, a government who invests in private businesses itself, and the access to an amount of data that qualifies as big data. Under these circumstances, Strittmatter explains, it is hard even for critical researchers not to get excited about the limitless possibilities.

Closing the evening Kai Strittmatter explained why he wrote a book on politics against his earlier belief that he would never do such a thing: With the election and the taking office of Donald Trump in the U.S., Strittmatter saw a perfect storm fall into place. He recognized a behavior he knew too well from his years as a foreign correspondent in China and Turkey and in listening to his friends in Germany he felt that people in the West completely lack the imagination at what a government under autocratic rule is capable of. «Just look at what tedious and thorough trouble Daimler Benz went through apologizing for posting a non-political saying and an image of the Dalai Lama on Instagram!» Strittmatter ended with an appeal to everyone: «We should trade with China, yes – it may today be even more necessary than ever –, but we should not be naïve, but stand together and assure ourselves of what values you are not willing to give up in the process.»

Read our«Behind the Scenes» interview with Kai Strittmatter here: «Every Single One of Them Is at the Mercy of the CCP» and listen to the full conversation here.

Uli Sigg is the former Swiss Ambassador to China, North Korea and Mongolia, Vice Chairman of the Board of Ringier, and Member of the Advisory Board of China Development Bank, of the International Council of the Museum of Modern Art (MoMA) in New York, and of the International Advisory Council of Tate Gallery in London. He is a member of the Board of Asia Soceity Switzerland. He is the world's foremost collector of contemporary Chinese art.

Kai Strittmatter, a Sinologist by training became foreign correspondent to China for the first time in 1997 for the German newspaper «Süddeutsche Zeitung». After a short stint in Turkey from 2005–2012 he returned to China until October 2018 from where he moved to Copenhagen. A month later his latest book «Die Neuerfindung der Diktatur» (The Reinvention of the Dictatorship) was published at Piper.