'Modi Himself Is Not a Vandal as Some People Think' 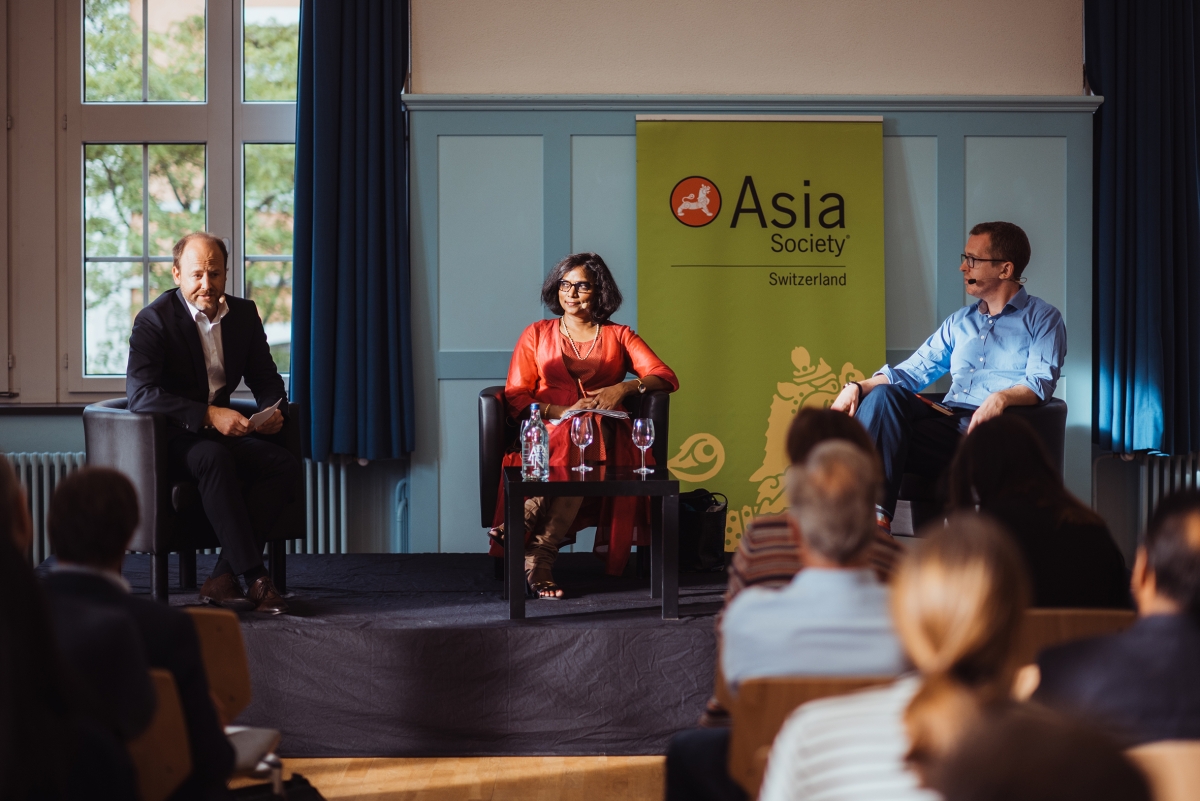 What does the clear re-election of Narendra Modi and his Bharatiya Janata Party (BJP) mean? Observers were surprised by yet another landslide win for the BJP – neither re-elections nor majorities are common for India historically – and many of them fear for the return of an autocrat that will allow Hindu nationalism to take more extreme measures and express their claim to be the only legitimate identity of India even more loudly.

On May 27, 2019, only days after the election results were made public on May 23, two analysts and commentators stopped by in Zurich to discuss what to expect from a second Modi term and beyond: Ruth Kattumuri, Co-Director of the India Observatory at the London School of Economics and Political Science, and James Crabtree, author, former Mumbai bureau chief for the Financial Times and Associate Professor of Practice at the Lee Kuan Yew School of Public Policy in Singapore.

In 2014 James Crabtree watched Modi win his first presidential election from up close as a correspondent in Delhi. The main difference, James said, was that Modi’s campaign in 2014 was one of hope and defined by economic reform promises whereas the 2019 campaign was about India’s rising strength and about Modi embodying a promising future. The change in topical focus may most likely come from the fact that although he initiated a number of schemes – he made sure that every village has at least one toilet and almost every citizen has a bank account now – his record on broader reforms is rather disappointing. In short: Modi had no big impact.

Ruth Kattumuri saw Modi’s win not as one of change in focus but more as a mandate by the voters. "People are asking for leadership", she added, and that the granting of a second term was an opportunity given to follow through with the reforms Modi has initiated. Yes, structural reforms need to be implemented, but this takes time, as Ruth emphasizes. She can see a first positive impact already with high school students in rural areas who aspire for jobs instead of just assuming that they would inevitably end up in the farming sector.

For Ruth, if you take a country like India – with 1.3 bn people – and a very young population and a low process of development, it is clear that job creation is the top priority for a second Modi term. And unlike others she can picture him deliver in that field. The "Start-up scheme" generated a lot of young entrepreneurs, but so far it has been beneficial for urban India and within it only to members of privileged families. In order to include all young people with ideas, Ruth said that multisectoral development is needed. This would allow all people to gain access to the start-up sector and further skills development and upward economic mobility. It is crucial to implement mechanisms for creating opportunities. Ruth identifies three sectors that are open to all kinds of jobs and allow for skills development: construction, textile and tourism.

Though James agreed to the analysis that before there is more equality there is more inequality, he seriously worried about the levels of inequality in India. In his book The Billionaire Raj he portrayed the richest Indian moguls while assessing India’s economic development so far and its future outlooks, comparing it to the U.S. around 1900 as well as the Asian Tigers. And although he argued, India will not become another China, he thinks it will still go down the manufacturing road of East Asia. But yet, it is far away from even being a middle-income country. A lot of people have been lifted from poverty in India, but still, the country has become much more unequal in the last two decades, mostly because the growth it has undergone so far has created new wealth especially at the very top. This difference between the bottom and the top matters, James added, because the top is supposed to build institutions – while people like Mukesh Ambani, Asia’s richest man, are only building residential skyscrapers for their families.

James was cautious with comparisons: "Modi himself is not a vandal as some people think", putting him in line with leaders of other huge countries. James saw some similarities though with Turkey’s leader Recep Tayyip Erdoğan: both started out as a kind of reasonably liberal sounding technocratic reformer focused on the economy but the longer Erdoğan has been in power the more he has brought power to himself and the more illiberal he has become. James doesn’t see that in India’s future, although he observes that many fear exactly this. Modi made Hindu nationalism more popular than ever and if you are part of a minority in India, you are nervous about the increasingly extreme pressure groups that appeared on Modi’s side during the campaign, James argued. It is uncertain though what turn the second term will take: will he continue on this cultural reform or will he rather concentrate on economic reform.

James will watch the quality of institutions – because they matter a lot for economic development but they also matter for political governance. "Institutions are what protect minorities, what will give the majority of people the faith that they will be looked after." Speaking with Nassim Nicholas Taleb, James attributed India a certain "anti-fragile" quality – so much that if he were to bet whether India or China would have the same institutional set up in 50 years’ time, he would "take India over China any day".

Ruth is confident that development in India will happen, but it will not do so as it has in other places. India will have to find its own way because the whole situation has changed., Since the Asian Tigers for example have made their way this is true especially in manufacturing: "Make in India" has to compete with these countries while they themselves didn’t have to face such a competition. And India will also have to go another way than China has taken, Ruth added, a fact determined by demography and democracy. A factor that will help and shape India’s growth though is technology: it will for one make everybody accountable as in paying their taxes, which includes the rich. Another factor that is starting to get people opportunities to work is infrastructure: there are roads so people don’t have to leave their villages and can work commuting instead of migrating. And exactly this creating of access to employment and job opportunities across the different sections of the population is going to be a priority, Ruth stressed.

As for India’s future as a secular state, Ruth recounts and counts on the experience of growing up in a classroom full of Hindus, Muslims, Buddhists, and Sikhs: a diversity similar to Europe. India has the second largest number of Muslim citizens after Indonesia, and Ruth argued: "This is a fact that cannot be taken away by anybody."

James Crabtree is a Singapore-based author and journalist, and an Associate Professor of Practice at the Lee Kuan Yew School of Public Policy. His best-selling book, The Billionaire Raj: A Journey Through India’s New Gilded Age, was released in mid-2018. It was short-listed for the FT / McKinsey book of the year. James is a columnist for Nikkei Asian Review and a non-resident fellow at the Asia-Pacific programme at Chatham House. Between 2011 and 2016, James was Mumbai bureau chief for the Financial Times leading coverage of Indian business. Before joining the FT, James was a senior editor at Prospect, Britain’s leading monthly magazine of politics and ideas. He has written for a range of global publications, including the New York Times, the Economist, and Foreign Policy. Before working as a journalist, James was a senior policy advisor in the UK Prime Minister’s Strategy Unit under Prime Ministers Tony Blair and Gordon Brown.

Ruth Kattumuri is Founder and Co-Director of the India Observatory and a Distinguished Policy Fellow at the London School of Economics and Political Science. She is a Fellow of the Academy of Social Sciences, UK. Ruth has a PhD from LSE and is also a Cambridge Commonwealth Fellow. Kattumuri was formerly Co-Director of the LSE Asia Research Centre. Prior to joining the LSE, she was Professor of Computer Science and Statistics in Madras (now Chennai), India. Her transdisciplinary teaching, research and public policy engagement pertains to several aspects of global sustainable and equitable growth-and-development including, human capital development, social entrepreneurship, innovation and technology. Ruth has pioneered several international programmes for knowledge exchange, capacity building, executive training and human capital development and she works closely with various public, private and third sector organisations in Asia and Europe.

The discussion was moderated by Mark Dittli, founder and editor-in-chief of The Market. 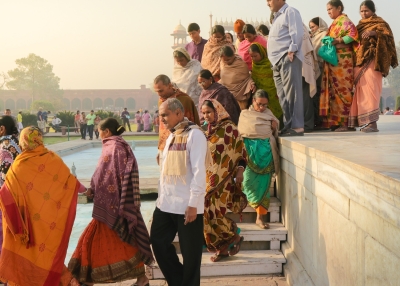