'I Was in Hong Kong During the Night of the Handover'

Kristin Shi-Kupfer on her connection to China, Hong Kong, and the challenges think tanks are facing 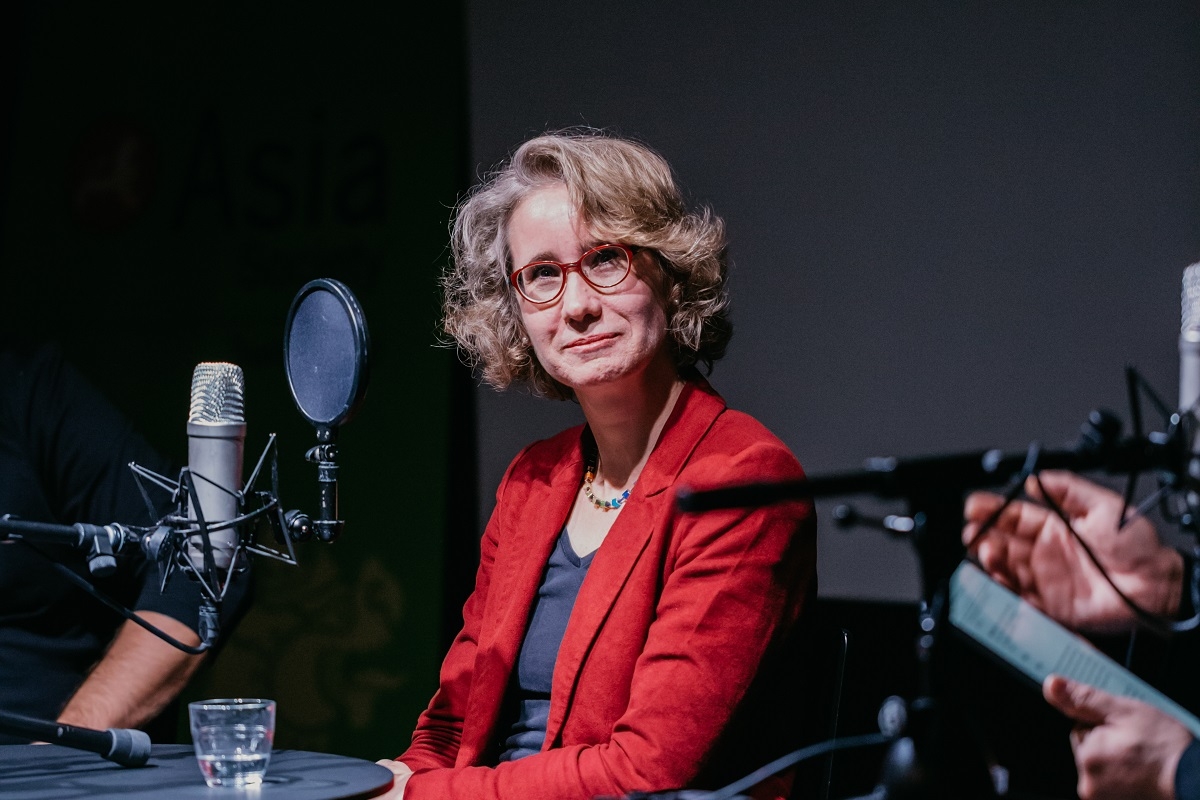 On November 1, 2019, Asia Society Switzerland hosted a live taping of the Sinica Podcast with Kristin Shi-Kupfer, Evgeny Morozov (Behind the Scenes) and Kaiser Kuo. Behind the scenes we talked to Kristin Shi-Kupfer about her connection to China, Hong Kong, and about the challenges think tanks are facing.

Kristin Shi-Kupfer: A lot of things were overwhelming at the beginning. First of all, Shanghai was quite a modern city already at that time with skyscrapers everywhere. Next to this modern unfolding side of China there were also traces of history and in the concession areas you could sense the relationship China had with the West, which was not an easy one. But personally, I felt welcome at the time: People were very curious, wanted to study their English and there was a lot of possibilities to engage with Chinese. The second year, I deliberately spent in Kaifeng in Henan province. Shanghai is the modern, liberal, and international part of China, but I also wanted to learn more about the core of Chinese traditions. Kaifeng, which lies on the Yellow River in the center of the country, is obviously a much more traditional place. It is a much smaller city with nearly no foreigners, but again, people were very friendly and curious. Often, they wanted to touch my hair, because they might have never seen blond hair before. In general, I got an idea of the diversity of the country, it’s complex relationship with the West, and its history. My sense after these two years was that this was a whole cosmos with a lot of complexity. China can easily be compared to Europe in terms of diversity, in terms of different local cultures, and even quite accurately in terms of size.

You were in China during the transfer of sovereignty over Hong Kong. How did you perceive this particular moment in politics history?

Yes, and I was in Hong Kong during the night of the handover. With a couple of friends, we decided to go there and witness this historical moment. I was part of the crowd and it was raining, I still remember, heavily. There was a mixed atmosphere in the city. On one hand there was a lot of fear, uncertainty, and a lot of people had emigrated to Canada and the United States. Nobody knew if the Chinese government would stick to its promise of “one country two systems” or if the People’s Liberation Army (PLA) would occupy the city. But on the other hand, it was party time and people were celebrating, especially young people. There was also excitement about a new phase for Hong Kong with new possibilities in terms of economic relations with mainland China. So, it was a pretty mixed atmosphere, depending on where you would be in the city: On the much more international Hong Kong Island people were in celebration mood. Whereas in Mongkok, in Kowloon or on the smaller islands people were a bit more reserved and hesitant. Of course, they did not have the means to leave. So, they obviously had to prepare to see how this will really play out.

And how do you perceive the protests after almost half the time of independence accredited to Hong Kong has passed?

First of all, I think the 1990s and early 2000s were quite a liberal time within mainland China. Not in the sense of political opening, but it was a time where a lot of things were evolving, including a vibrant civil society. I’ve repeatedly visited Hong Kong during the early years after the handover and the atmosphere was pretty much okay. "Business as usual", so to speak. Then, in 2003, the first major protest erupted with half a million people on the streets. The movement was against the attempt of the Hong Kongese government to put in place a national security legislation. With it, people’s freedom would have been restricted in the name of national security by, for example, the Hong Kongese government‘s access to private bank accounts. Leading up to the Olympics in 2008 there was a lot of hope and a little bit of opening up in terms of discussions about the future of mainland China. The next larger movement was Occupy Central in 2014. And then, of course, we have the latest protests, which learnt from them not to occupy permanently. Obviously, they also took into account how the last movement ended. Thus, since the handover we have seen quite some protest movements.

What were the discourses that triggered these protests?

Clearly, the discourse changed and the polls, which the Chinese University of Hong Kong does on a regular basis, show that identity shifted. There was the feeling that China is gradually influencing Hong Kong in a subtle way, wanting it to be more like mainland China. We had the book sellers kidnapping of course, but also changes or attempted changes within the curriculum at universities. Scholars said they were not as free to bring up sensitive topics anymore. There was a changing notion towards "We want to keep our autonomy" – and this claim to independence was then evolving into a more dominant theme.

How about mainland China and their perspective on Hong Kong?

In mainland China, kind of correspondently, the initial reaction towards Hong Kong was curiosity and admiration. For example, people trusted milk powder in Hong Kong a lot more than in mainland China and traveled there to buy it. But gradually, the excitement gave way to disappointment. With the rising tensions many mainland Chinese lost their interest in Hong Kong and at the same time, they developed a feeling that these people are not grateful enough. In recent years, the discourse changed driven by the Chinese Communist Party in the sense of "The protesters are troublemakers and we have to restore order. It ruins not only Hong Kong, but eventually could endanger the whole national security in China. So, it’s right to crack down on these troublemakers". I think a lot of mainland Chinese by now share this opinion.

Staying in mainland China: With growing access to the internet, digital society in China exploded during the past two decades. How would you describe the influence of digital society on social change?

Initially, in China it fostered a lot of awareness and self-organization, as well as a lot of possibilities to share and to access information which you would not necessarily find in official media. People would use their mobile phones to take pictures or do a recording and then put it on social media. Local issues, such as environmental issues, labor issues, or just an unfair treatment would suddenly become large within a local or cross-regional context. There was a lot of hope that bottom-up pressure towards the authorities would lead to change. In the beginning the Chinese government did not pay too much attention to social media. Twitter and Facebook were only banned after the huge protest movement in Wulumuqi, Xinjiang, in 2009. I think that was when they understood what kind of dynamics social media can create. That was also when the Chinese State discovered how valuable social media is to share a story or to spread their own narrative. And then of course commercialization of the internet took over. WeChat and Sina Weibo built their business not only on information sharing platforms, but on all kinds of services such as shopping, ordering a taxi or food. But other aspects of technology can also be seen, for example the use of facial recognition by an authoritarian state. We see the worst example of what can be done in Xinjiang: they use tracking technology and apps to access people’s mobile phones. Nowadays, the whole digitalization has a very complex impact on social change in China with a huge economical and political angle.

You work for the Mercator Institute for China Studies, which is one of the few think tanks in Europe focusing on China. Why do you think there are so few China or Asia think tanks around? What are the challenges they are facing?

Right, there are indeed few think tanks that focus solely on China or on Asia, but I think this is growing and it should be as a lot more people are qualified and have the capacity and resources. However, for European think tanks, the challenge is to strike a balance between China and the U.S. – a tricky balance if you ask me. Talking to U.S. think tankers nowadays, there is a lot of bipartisan agreement that now is the time to disengage with China. The nation is often portrayed as a threat. It is not very European to be so confrontational. I think for European think tanks the challenge is to find their own position and opinion. The alarming developments within China, such as the political hardening, what’s going on in Xinjiang and in Hong Kong, should not be denied. But clearly this does not mean we should cut off contact all together. We should have red lines and communicate those more clearly to Chinese officials. At the same time, we should look for opportunities to engage with China in a meaningful way. Another challenge is the access to Chinese colleagues. The foreign NGO law puts European think tanks, like U.S. think tanks, in a position which makes it much riskier and less attractive for Chinese counterparts to collaborate. Conversations have gotten more reserved and people are hesitant to share. This shows that our Chinese colleagues are also under pressure. And last but not least, access to get a visa to China has become more challenging. A couple of people have trouble with obtaining a visa or at least it is uncertain until the very last moment whether they can actually travel or not. The challenge to keep the balance as a European between China and the U.S., to find our own perspective but also access and interaction with our Chinese colleagues has gotten much more difficult.

Kristin Shi-Kupfer heads MERICS’ research on politics, society and the media. She is an expert on China’s digital politics, ideology, media policy, civil society and human rights. From 2007 to 2011 she was the China correspondent for the Austrian news magazine Profil, the German Protestant Press Agency epd, and Südwest Presse in Beijing. In May 2017, Shi-Kupfer was appointed member of the expert committee of the German-Chinese platform on innovation under the Federal Ministry of Education and Research.