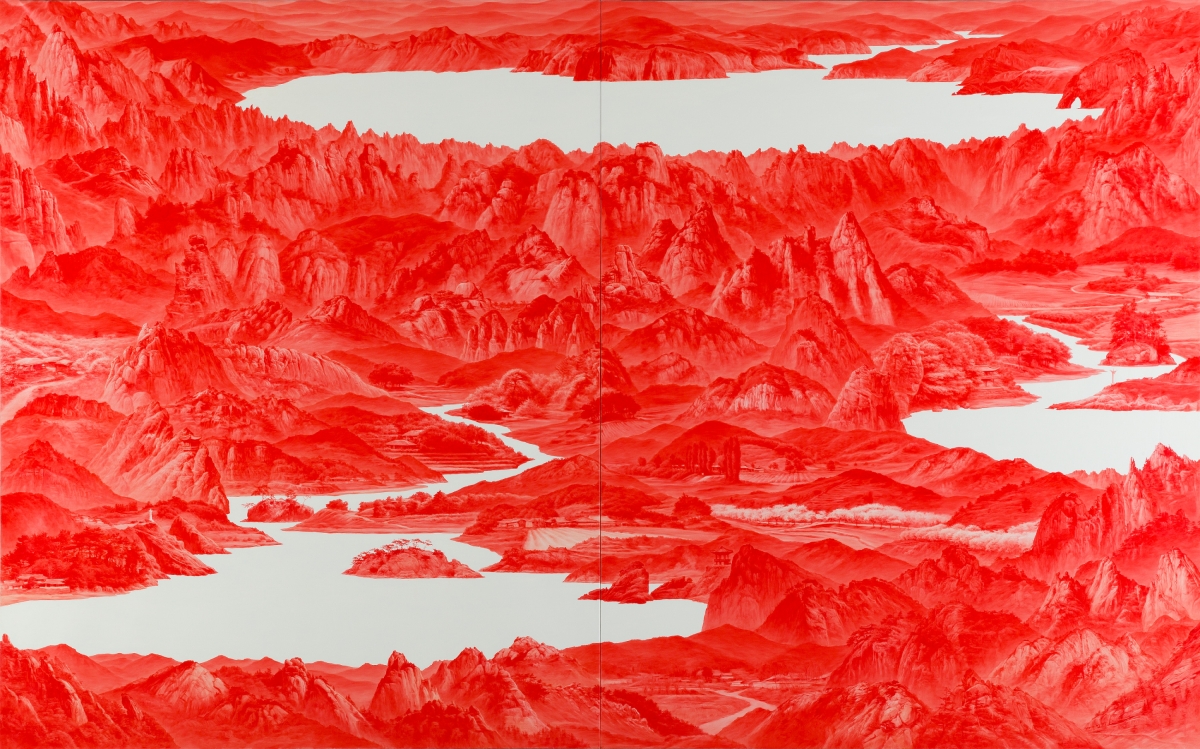 Note that we'll have another North Korea-related tour on the same day in Berne.

Check out the other Tour

Note: Before the closing of the exciting and unique exhibition of North and South Korean art from the Sigg Collection at Kunstmuseum Bern, we are organizing a second iteration of tours through the two exhibitions on North Korea in Bern at Kunstmuseum and Alpine Museum Bern. Find the other tour here

The exhibition Border Crossings at the Kunstmuseum Bern allows the public a close look at the Korean Peninsula, divided since 1953. A 250-kilometer border of barbed-wire fences and anti-tank barriers divides Korea into two states which could not be more different from one another. Equally divergent is the art produced simultaneously in the two countries.

The North fosters a socialist-realist tradition of painting, while in the South a vital contemporary art examines the irreconcilability of the two political systems and the lived reality of the population. In the exhibition, the contrasting world-views engage in a dialogue with one another and invite the public to approach Korea’s history as well as its present.

Selected works from the Sigg Collection form the starting point of the exhibition and set visitors on a journey through Korean art from the 1970s until the 2010s. During his time as Swiss ambassador to China, Uli Sigg was also ambassador to North Korea (1995 – 1998). This gave him both a profound insight into North Korean reality and the unique opportunity to acquire works.

Leading you through this exhibition will be its curator, Kathleen Bühler, Kunstmuseum Bern Chief Curator.

Kathleen Bühler studied art history, film studies and philosophy and received her PhD from the University of Zurich on the experimental film work of Carolee Schneemann (Marburg 2009). 2021 she was nominated Chief Curator of Kunstmuseum Bern. Before that she has been curator and head of the Department of Contemporary Art since 2008. She has written numerous exhibition reviews for the feature section of the Neue Zürcher Zeitung and regularly contributes to international contemporary art in newspapers, magazines, and exhibition catalogues. Solo Exhibitions with Tracey Emin (2009),Yves Netzhammer (2010), Berlinde De Bruyckere (2011), Zarina Bhimji (2012), Bill Viola (2014), Bethan Huws (2014), Silvia Gertsch/Xerxes Ach (2015/16), Miriam Cahn (2019),Thomas Hirschhorn ("Robert Walser-Sculpture" as part of the 13th Swiss sculpture exhibition Biel 2019) and El Anatsui (2020). Border Crossings. North and South Korean Art from the Sigg Collection is her second exhibition curated with Uli Sigg’s art collection. Chinese Whispers. Recent Art From the Sigg & M+ Sigg Collections (2016) was her first. It was a major success and had more than 130’000 visitors in Switzerland before it travelled to Vienna, Austria.