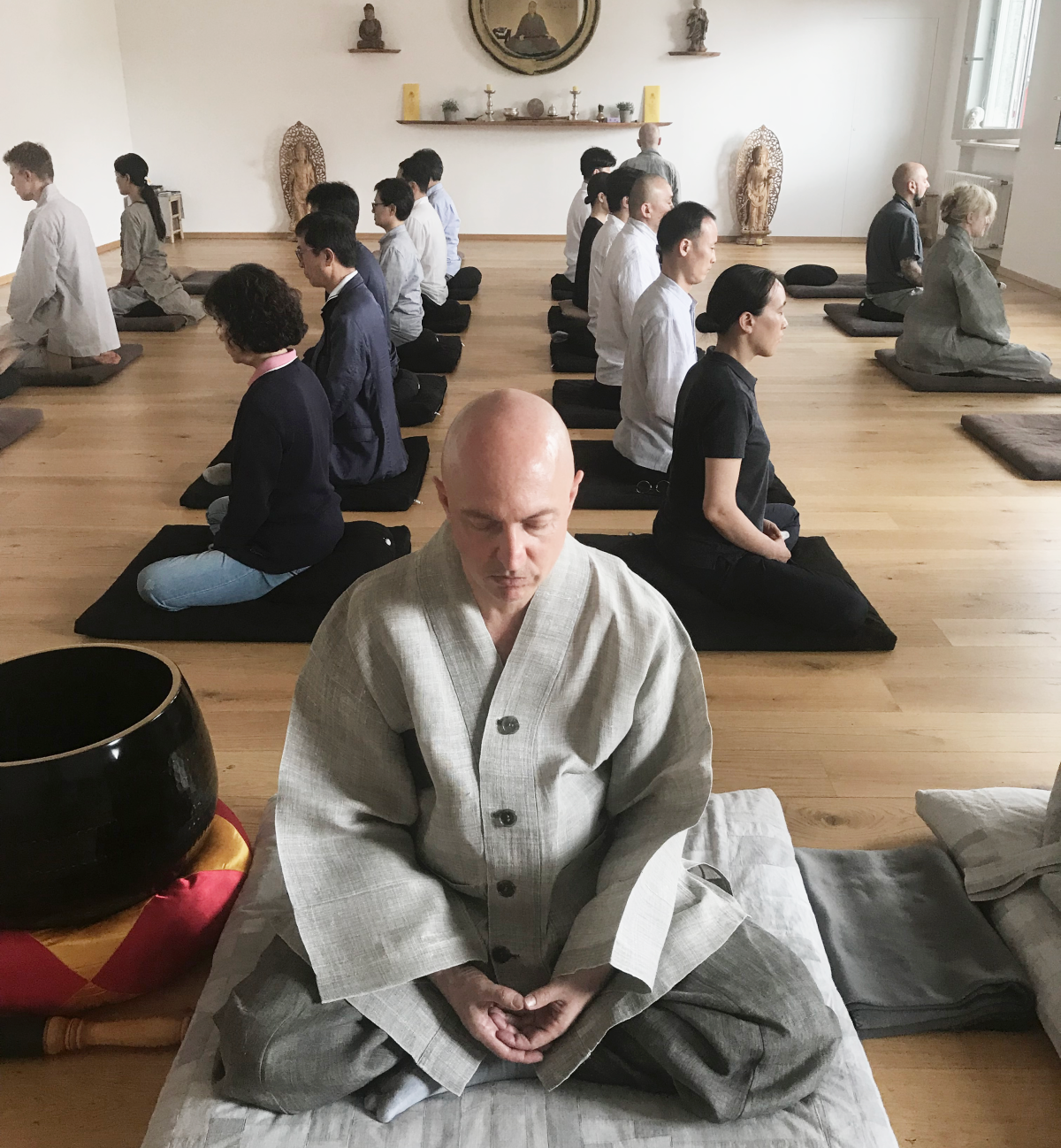 Different forms of meditation have existed in many different cultures and religions throughout human history. Cutting-edge scientific research provides a wealth of evidence pointing to the benefits of meditation for well-being, even down to the level of the functioning of genes.

But what is meditation and what is the aim of meditation?  How does it differ from the common understanding of “Zen” in the West? How is Zen Buddhism perceived by younger generations living in Asia? And how can we practice Zen when expectations to be personally, emotionally, and professionally available 24/7 are only increasing?

The American Yale- and Harvard-graduate-turned-monk Hyon Gak Sunim has trained intensively for over three decades in the temples of Korea, China, and Japan. He is the first Westerner to be ordained in the People’s Republic of China since the Communist Revolution. Sunim’s best-selling autobiography Man Haeng: From Harvard to Hwa Gye Sah Temple is widely credited as being the catalyst for a noticeable revival in interest in Zen Buddhism, especially among younger generations in Korea.

In this session of Big Picture, moderated by Julianne Lee, Zen Master Hyon Gak Sunim will talk about what he has learned regarding the nature of mind and human experience. Not an academic or conceptual talk, Sunim will offer actionable hacks for bringing Zen meditation into our daily lives. Don’t miss our interactive discussion and join Sunim’s guided practice session for a demonstration of Zen meditation. The event will be followed by an apéro.

Hyon Gak Sunim, “Sunim”, born Paul J. Muenzen in New Jersey, U.S.A., has been a practitioner of Zen Buddhism for over three decades and underwent intensive training in different temples in Japan, China, and Korea. In 2001, Sunim was publicly tested in Dharma combat and received inka (formal approval of enlightenment, and certification of teaching authorization). He is often cited in Korean media for leading a revival of interest in Buddhism in Korean society, especially among the young and educated. His multi-million bestselling book, Man Haeng: From Harvard to Hwa Gye Sah Temple, is regarded as the first major Buddhist bestseller in Korean Buddhist history; and his editing, translation, and teaching of several texts by Zen Master Seung Sahn made him one of the most recognized and influential voices in modern Korean Buddhism. Sunim has given public talks at Harvard, Yale, Stanford, Oxford, Université de Paris, and the University of London, among many others, in addition to numerous temples throughout Korea, Hong Kong, Singapore, and Japan. He studied literature, literary theory, and philosophy at Yale University, and holds a Master's degree in Theological Studies from Harvard Divinity School. In June 2018, he was invited to teach Zen meditation at a conference in the Vatican: it was the first time that Zen was ever known to have been taught inside the Vatican.

Julianne Lee is the CEO of JULIANNE LEE & Co., which publishes ARS VITAE, a publication series that explores the various aspects of what it means to live well. She and her husband Christian co-founded Krueger & Lee, a Swiss-based non-profit organization, which organizes the annual Spirituality and Science Forum with world-renowned scientists doing cutting edge research on the mind, consciousness and the effects of contemplative practices. Krueger & Lee also organizes meditation retreats. Previously, Julianne was the first Spokesperson of the National Security Council of Korea, and the youngest Presidential Secretary and Spokesperson for Foreign Press Affairs in President Roh Moo-Hyun’s administration in Korea. Prior to joining the government, she was correspondent and news anchor at SBS, a major TV network in Korea. In 1994, she became the first female journalist in Korea to become the solo main anchor of a primetime news hour. She was also the Senior Advisor of RBS bank and securities in Korea. Julianne received her B.A. from Brown University and M.A. from Harvard University. In recognition of her unique career, Julianne was named Young Global Leader and New Asian Leader by the World Economic Forum as well as the Next Generation Leader by the Korea Foundation. She currently serves on the boards of the Korea Foundation and Krüger Foundation.

This event was organized in collaboration with Krueger & Lee, Spiritual Wisdom and Contemplative Practices for the Contemporary Seeker