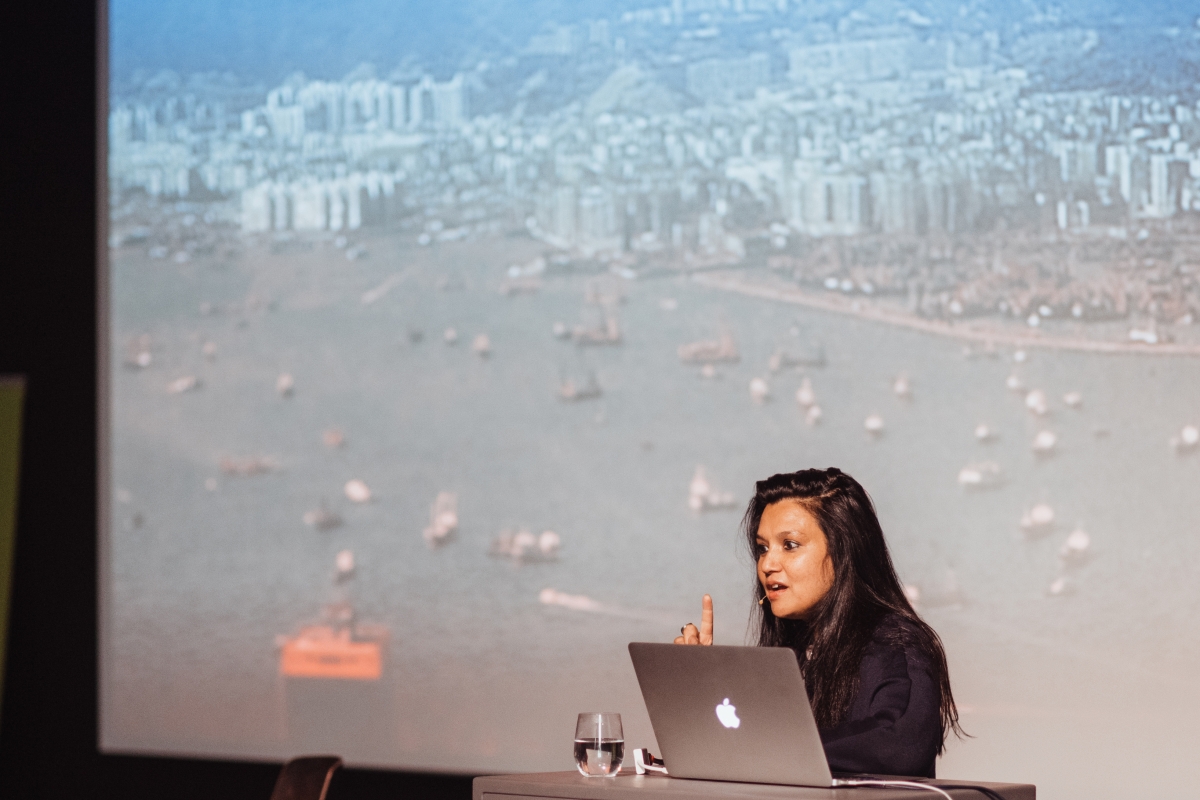 On May 3, 2019, Museum Director, M+, Suhanya Raffel offered an audience of over 100 people a glimpse behind the construction site of the M+ and its activities. The museum is already running without the official building having even opened yet. The goal of the M+ was laid out clearly: building something from nothing – and that something is very ambitious.

It is Uli Sigg, the world’s foremost collector of contemporary Chinese art, who connects the M+ to Asia Society Switzerland. He got engaged very early in both these young institutions and contributed to them significantly and generously. Only naturally it was him, a Member of the Foundation Board of Asia Society Switzerland, who welcomed Suhanya Raffel, Museum Director, M+, and a room full of art lovers at schwarzescafé in Zurich.

Suhanya Raffel took the audience through the origin story of the M+ – a story that is still in its making. Her presentation started out in 1991 with a picture of only water where the museum building will open its gates in 2020. The land where the West Kowloon Cultural District is located today came into being as a byproduct of the Airport Express Link: the soil that was dug up from the tunnel was used to build the foundation of one of the world’s largest cultural projects currently under construction. That is: in one of the most expensive real estates, in a city that is built almost strictly vertically exactly for that reason, 40 hectares were assigned to a culture site with the condition of keeping 23 hectares of it as open space.

"M+ is more than a building – and not having had a building these past few years has had great advantages", Suhanya Raffel stated. The M+, a new museum dedicated to collecting, exhibiting and interpreting visual culture of the 20th and 21st centuries, is already very active and has established a collection of over 6500 objects and 14 000 archives by today. One of its testimonies are the over 500 works the M+ loans to other museums in 19 different countries, among them the Tate Modern in London, the Guggenheim in New York or the National Gallery in Singapore. The starting point of this development was laid out with Uli Sigg’s donation of 1512 works in 2012 – a donation that became the "founding collection that immediately set a tone to the broader collection of the M", as Suhanya Raffel added:

The Sigg collection includes seminal works from the 1970s right through to 2012. […] there is no collection like this in any museum in the world that talks about that avant-garde moment in China. And M+ in Hong Kong is the perfect home for that collection. Because in the end that story is a story of a moment that is very rare in the history of visual art, visual culture. [… T]hat period from the mid-early-1970s right through to the late 2000s was a flowering of contemporary Chinese art in a way that we have not seen in any other part of the world. Also because of the situation within that country.

With an airport, a ferry terminal and an express rail link, Hong Kong’s connectivity is enormous: 74.7 million people arrived at Hong Kong International Airport in 2018, around 80 million people are visiting Harbour City each year, and an average of 50 921 people take the express rail per month. The Greater Bay Area alone is home to 70 million people and from mainland China around 52 million people are coming into Hong Kong each year. The opportunities for the museums are huge and the immediate local environment a priority to Suhanya Raffel: "These numbers are a fact of living in Asia and Asian cities are large cities. The challenge of a museum director is making culture an important part of those citizens’ lives. My advantage is that within Asia the hunger for knowledge is established – it is a knowledge culture already. So, a museum is a natural place to seek knowledge and I think that is a very good thing."

In conversation with Thomas Kellein, a former Museum Director himself (Kunsthalle Basel and Kunsthalle Bielefeld), Suhanya Raffel talked about the numbers side of making a museum: admission strategy, attendances, and museum shops. But the numbers alone don’t make a success story. According to Suhanya Raffel, one of her main tasks is to develop an informed audience. And this means establishing a public discussion on site and abroad. When the M+ created its exhibition on sculptures around an inflatable building on the grounds of the future museum, it caused controversies in both the Hong Kong society as well as its media very rapidly and intensely. Today, Suhanya Raffel calls the questions raised then about it being art at all "very productive". Additionally, in her role as Museum Director she has to appear before Parliament three times a year, where she discusses aspects of the endeavor of building a public cultural institution from nothing with the legislators of a very business driven city directly.

The audience she seeks with the global collections of M+ though are not the legislators alone, but any audience in the world. With a staff including more than 18 nationalities and an average age of 29 years – "No" is not in their vocabulary – Suhanya Raffel is looking for another kind of success:

Success looks like transformation – when Hong Kong understands what this institution will actually do to this city. It will change how they think about culture and I think that is already happening to some degree. All of us in this room already understand the value of culture – that is why we are sitting here and having a conversation about it. But really in the end it is those people who are not in this room that need to be moved by an institution like this. And cultural institutions do change cities.

Listen to the whole Suhanya Raffels keynote and her conversation with Thomas Kellein here:

More pictures of the event can be found here.

Suhanya Raffel, Museum Director of M+, was appointed Executive Director of the museum in November 2016. Her curatorial career began in 1984 and she has over 30 years of experience as a museum curator and leader. Prior to joining M+, Ms. Raffel was was Deputy Director and Director of Collections at the Art Gallery of New South Wales, Sydney, Australia and Acting Director of the Queensland Art Gallery & Gallery of Modern Art, Brisbane, Australia. She is a Trustee of the Geoffrey Bawa Trust and the Lunuganga Trust, Sri Lanka and a member of the board of the International Committee for Museums and Collections of Modern Art (CIMAM), Barcelona, Spain.

About M+: A cornerstone of the ambitious West Kowloon Cultural District Project, M+ is scheduled for completion in 2020. As Hong Kong’s new museum for visual culture, it will encompass twentieth- and twenty-first century art, design, architecture, and moving image from Hong Kong, Asia, and beyond. The museum aims to document the past, inform the present, and contribute to the future of visual culture within an evermore interconnected global landscape.

Thomas Kellein is Director of Bergos Berenberg Art Consult in Zurich, Art Historian and Curator of a major "Written Art Collection" focusing on calligraphy and contemporary art in Europe, the US, the Far East and the Arab countries including North Africa and Iran. After graduating with a PhD in art history, Mr. Kellein held many curatorial and directorial positions, among them Director of the Kunsthalle Basel, Director of the Kunsthalle Bielefeld, Founder of Garten-Landschaft Ostwestfalen-Lippe. He was Professor of Art History at the University of Freiburg and Jury Member for Hasselblad Prize, Gothenburg; Benesse Prize, Venice; Wolfgang Hahn Preis, Cologne; Kunstpreis Böttcherstrasse, Bremen.