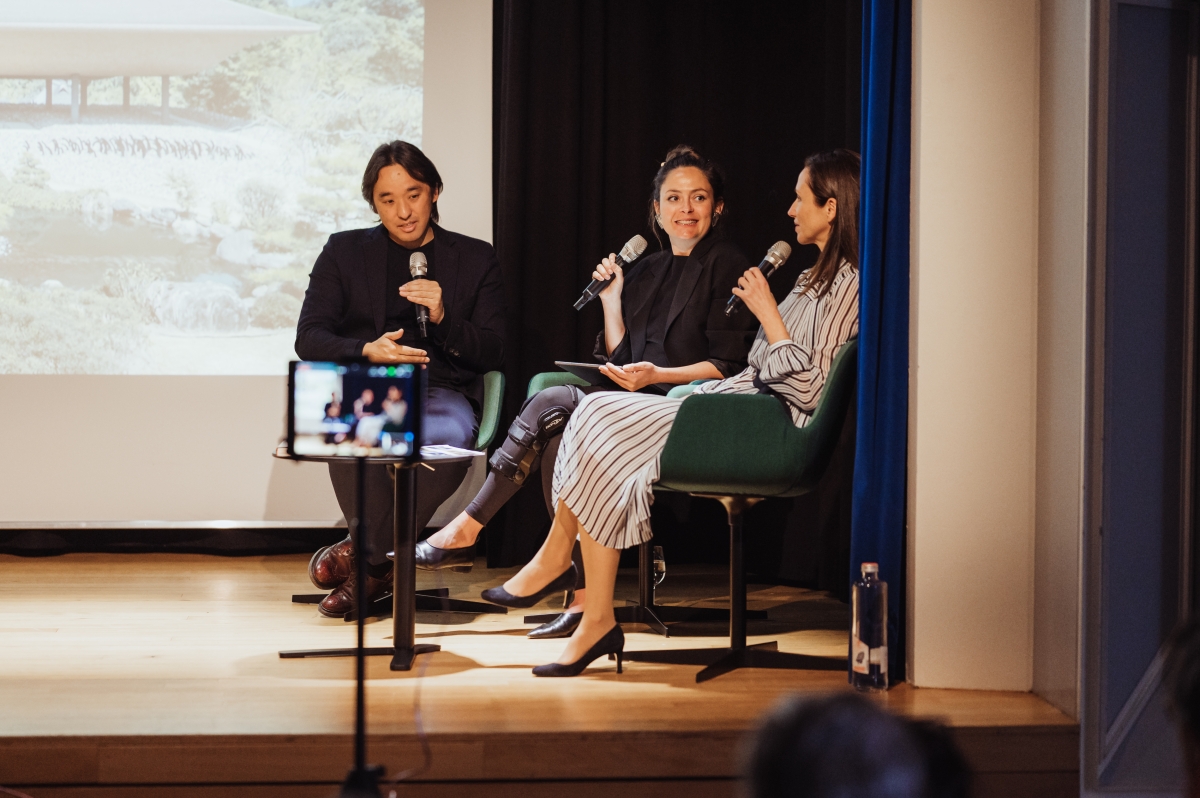 ZURICH, APRIL 12, 2022 - Japanese architect Yuichi Kodai fully embraces the importance of ‘empty’ space, known as the Ma (間) concept. It is about distance, space, and time - it’s even present in how we use language. You’re telling a story, you stop for a moment of blankness, and then continue talking. That moment of blankness, like the space between objects or people, is still filled with something. According to Kodai, you can use Ma in buildings as well: it creates distance, depth, and ambiance.

Together with art historian and author Sophie Richard, he spoke during Big Picture, a new event series from Asia Society Switzerland celebrating art in all its forms and shapes. The first edition focused on museum design in Japan, where the space around art is often as important as the exhibited works themselves.

Sophie Richard, an expert on Japan’s museums, presented her latest book: The art lovers’ guide to Japanese museums. It features over one hundred museums, focusing on their collections as well as on the buildings that encase them. A noticeable aspect many have in common: the concept of Ma is visible everywhere, through the abundant use of empty space.

KOHTEI at the SHINSHOJI ZEN MUSEUM AND GARDENS

The cover of Sophie Richard’s book is a photo of Kohtei, at the Shinshoji Zen Museum and Gardens in Fukuyama city. The building is designed by art studio SANDWICH Inc., where architect Yuichi Kodai was director of the architecture department alongside contemporary artist Kohei Nawa.

The ship-shaped building appears to hover above the woods and is covered in Kokera-Buki, Japanese traditional wooden shingles. The building is composed only of a roof and a single space contained within, which is envisioned as a zen meditation garden. The visitor experiences the installation composed of light and waves for 25min.

KOHTEI was commissioned by Shinshoji Temple which wished to create a new building with a garden that reflected our time, and that worked with the existing Japanese garden.

Kodai showed the audience in Zurich for only a few seconds filmed inside KOHTEI. There’s no video of it online, so visitors can experience it in full the first time they enter the building.

The new wing of the Sagawa Art Museum in Moriyama, which houses two tea rooms, was designed by ceramist Raku Kichizaemon-kan. Raku went from designing tea bowls to a museum wing from one day to the next.

The exhibition rooms have dark tones and allow for lots of space between the art works. There are no labels or information signs. According to Richard, the museum offers an experience with the art, instead of striving to educate by providing loads of written information.

The atmosphere in the Gallery of Horyuji Treasures at the Tokyo National Museum also uses spare lighting to create a solemn atmosphere of contemplation amidst the exhibited bronze buddha statues from the 7th and 8th centuries, when Buddhism arrived in Japan and became the state religion.

The statues are evenly spaced out throughout the gallery, each in their own glass encasing, staring at the visitor. Information labels are attached on the side, as not to distract from the straightforward gaze of these sacred statues.

In the Hiroshi Senju Museum in the countryside of Karuizawa, the contemporary paintings hang in full, natural daylight. The building has no walls, just glass separating the art from four gardens that are embedded in the space.

For Yuichi Kodai, this museum is one of his favorites, because there are almost no boundaries between the inside and the outside. It proves you do not need spotlights and high walls to build a museum.

Sophie Richard worked in the art world in New York before moving to London where she is now based. She has been travelling to Japan for the past 16 years. Her first book on museums in Japan was published in 2014 and was translated into Japanese in 2016. Her articles have appeared in magazines in the USA, the UK, and Japan. She has been a regular contributor to Japanese television programs on the country’s museums, and in 2018 and 2019 her work was the basis for two television series on the subject. Sophie has been pursuing her research on art museums in Japan and her second book, The art lovers’ guide to Japanese museums, was published in 2019. In parallel, she creates and leads bespoke art tours to Japan. She also advises on the promotion of Japanese arts and culture towards a Western audience. In December 2015, her work was recognized by the Agency of Cultural Affairs in Japan and she received the Commissioner's Award.

Yuichi Kodai is an architect and one of the directors at kodai and associates GmbH. The practice focuses to create architectural spaces through a Japanese mindset working with Asian and Western cultures. He graduated from the Architectural Association in London and has worked for the Swiss architectural practice Herzog & de Meuron, where he worked on high-profile international projects, notably, Perez Art Museum Miami, and TATE Modern. He then founded the architecture department in the art studio of SANDWICH Inc. in Kyoto. Yuichi completed the award-winning building, KOHTEI, in Fukuyama City, Hiroshima, in 2017. He also worked at HILDEBRAND Studios where he acknowledged Swiss building and crafting culture, and has been an assistant professor at the Singapore University of Technology and Design (SUTD).

Aurelia Rauch moderated the conversation. She received her Magistra Artium in Art History at the University of Münster in 2010, after her training in museum education at the Kunsthalle Bielefeld and the Kunstmuseum Pablo Picasso Münster. Until 2018, she lived and worked in New York City and played an important role in New York's vibrant contemporary art scene, alongside her work in commercial and non-profit art organizations. Most recently she worked as Creative Director at Sperone Westwater on projects with artists such as Bruce Nauman, Susan Rothenberg, Richard Long, Tom Sachs and Ali Banisadr. Since 2018, Aurelia has been the Head of Communications at Bergos, and Senior Consultant, Bergos Art Consult. Bergos is a Corporate Partner of Asia Society Switzerland.