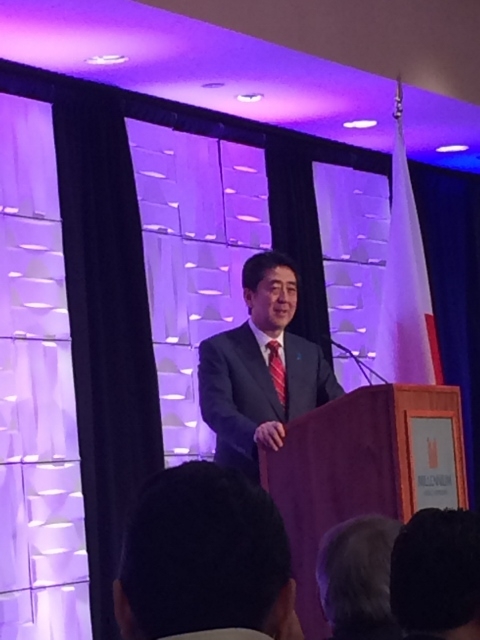 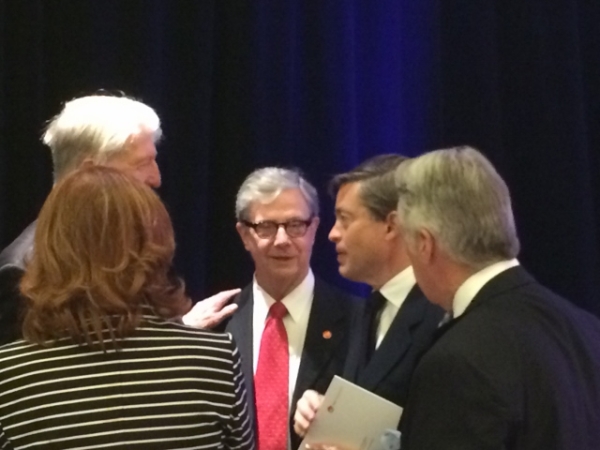 A new defense cooperation agreement with the United States will be “instrumental in improving security” in Asia, and Japan is “doubling efforts to contribute to peace and stability in the region and the world,” Prime Minister Shinzo Abe told a luncheon co-hosted by Asia Society Southern California.

He also reiterated his hope to conclude negotiations on the 12-nation Trans-Pacific Partnership trade agreement. And he said he’s ready to reform policies on long-protected sectors such as agriculture, health care, energy and labor, even opening Japan’s economy to foreign skilled workers as the country’s working-age population declines.

The May 1 luncheon, attended by 750 dignitaries and invited guests, came at the start of Abe’s two-day visit to Los Angeles, the last stop on his U.S. tour.

“Welcome back home to Los Angeles,” Mayor Eric Garcetti told Abe, referring to the prime minister’s stint as a student at the University of Southern California in the late 1970s.

Acknowledging his affection for Los Angeles, Abe said, “Ambassador (Caroline) Kennedy urged me to go to Boston, so I did. But I had a strong determination to visit Los Angeles.”

After his speech to a joint session of Congress – a first for a Japanese prime minister – and stops in Boston and Silicon Valley, Abe focused on what he called the “new Japan” and the importance of ties to the U.S. and Los Angeles, home to the biggest Japanese-American population.

He noted that Los Angeles has more Japanese companies than any other U.S. city, saying that “this represents the depth of relations and the resurgence of Japan’s economy that Abenomics has brought about.”

Abenomics is the nickname of his reform agenda, a program of “three arrows:” an easing of monetary policy, increased spending and structural reforms to jumpstart Japan’s long-stagnant economy. The third arrow – structural reforms to open the economy – is the most difficult politically, and he was asked to assess his progress.

“I am often criticized about the third arrow, that it has missed its target,” Abe replied. “However, I will tell you this: I was a member of my college archery team, so my arrow will definitely hit the target.”

The quip drew laughter, as did several other comments in a speech that mixed policy with humor. Abe joked that Japanese prime ministers typically aren’t in office long enough to visit any American city other than Washington, DC. After surviving for two-and-a-half years, he said, he’s been able to visit several.

In the same vein, he remarked that a lot had changed in California in the 40 years since he studied here. But many things are still the same, like the uniforms of the Highway Patrol and the governor, he said to rousing laugher and applause. Governor Jerry Brown held the same post back in the 1970s.

Just as Abe’s economic agenda has attracted international attention, so too has his more assertive foreign policy and military policy. Abe said the emergence of new dangers – the spread of weapons of mass destruction, cyber threats and the rise of extremism – required Japan and the U.S. to update their defense agreement for the first time since 1997.

"Today those threats can cross national borders, which means no single country is able to defend its peace and security by its own means,” he said. “Under these circumstances I strongly advocated what I call a proactive contribution to peace, which is based on the principle of international cooperation."

Abe’s prevailing message was an affirmation of broad bilateral ties. Two years ago, “I said ‘Japan is back’ and promised the U.S.-Japan alliance would be revitalized,” he said. “Today, the alliance stands on rock-solid foundation, stronger than ever. It is an alliance of hope that is capable of dealing with global issues, like climate change, infectious diseases and responses to natural disasters.”

In returning the commitment to partnership, Mayor Garcetti said, “This will be a Pacific century, and Los Angeles is ready to lead it with you.”

Abe spoke of his appreciation for Angelenos’ embrace of Japanese culture, including manga, anime and food, as well as Japanese baseball players. The Los Angeles Dodgers were among the pioneers in recruiting and cultivating Asian athletes.

He also waxed nostalgic about his love of Hollywood movies, singling out “The Graduate” as his favorite from his days at USC. Hollywood DVDs, he said, “give me peace of mind.”

ASSC Chairman Thomas McLain, who had been deeply involved in Asia Society efforts to invite Abe, sat at the head table with Prime Minister Abe and Mayor Garcetti, among others. Asia Society Trustee Nicolas Berggruen and several ASSC board members also attended.