Strategic Competitors: The Future of the U.S. and China Relationship | Asia Society Skip to main content

Strategic Competitors: The Future of the U.S. and China Relationship 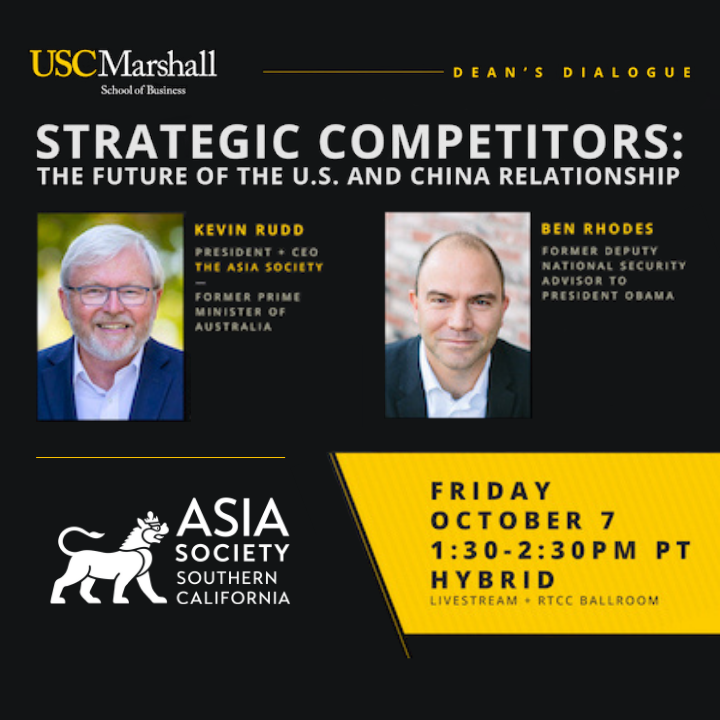 On October 7, Rudd will be in Los Angeles for a rare in-person speaking engagement hosted by Asia Society Southern California in partnership with the USC Marshall School of Business. Rudd will discuss how the U.S. can manage strategic competition with China in a conversation with Ben Rhodes, former Deputy National Security Advisor to President Obama, which will be moderated by USC Marshall Dean Geoffrey Garrett.

One of the world's foremost authorities on China, Rudd has recently published, The Avoidable War: The Dangers of a Catastrophic Conflict between the US and Xi Jinping's China. There will be a book signing opportunity immediately after the event.

The Honorable Kevin Rudd became President and CEO of Asia Society in January 2021 and has been president of the Asia Society Policy Institute since January 2015. He served as Australia's 26th Prime Minister from 2007 to 2010, then as Foreign Minister from 2010 to 2012, before returning as Prime Minister in 2013. He is also a leading international authority on China. He began his career as a China scholar, serving as an Australian diplomat in Beijing before entering Australian politics.

Ben Rhodes is a writer, political commentator, and national security analyst. He is currently a contributor for NBC News and MSNBC, and chair of National Security Action, which he co-founded with Jake Sullivan in 2018. From 2009-2017, Rhodes served as a Deputy National Security Advisor to President Obama. In that capacity, he participated in all of President Obama’s key decisions, and oversaw the President’s national security communications, speechwriting, and public diplomacy. He led the secret negotiations with the Cuban government that resulted in the effort to normalize relations between the United States and Cuba, and supported the negotiations to conclude the Joint Comprehensive Plan of Action (JCPOA) with Iran. He is the author of the New York Times bestsellers, After the Fall: Being American in the World We’ve Made, and The World As It Is: A Memoir of the Obama White House.

Dr. Geoffrey Garrett is the University of Southern California’s Marshall School of Business Dean, Robert R. Dockson Dean’s Chair in Business Administration, and Professor of Management and Organization. He is the 18th dean of the Marshall School, which celebrated its centennial year in 2020-21. Previously, Dr. Garrett taught at USC from 2005-2008 as a professor of international relations, business administration, communications and law while also serving as the President of the Pacific Council on International Policy. Garrett assumed the role on July 1, 2020 after six years as Dean of the Wharton School at the University of Pennsylvania. Additionally, Garrett’s previous administrative appointments include service as Dean of the business schools at both the University of Sydney (where he was also founding CEO of the United States Studies Centre) and UNSW Australia, and as founding Dean of the International Institute as well as Vice Provost of International Studies at UCLA.