These events are worth checking out! 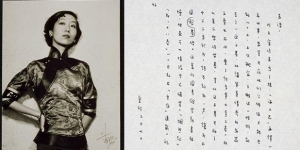 Eileen Chang's Sea Burial and Special Collection at USC East Asian Library
January 17, 4:00pm to 5:30pm at Doheny Memorial Library, Room 241
One of the most influential modern Chinese writers and the author of Lust, Caution, Eileen Chang passed away in Los Angeles in 1995. After her death, Dominic Cheung, Professor Emeritus at USC, took care of her sea burial in San Pedro and set up the Eileen Chang Special Collection in the East Asian Library at USC in 1997. Cheung will discuss these experiences as a part of the lecture series titled Los Angeles and Shanghai: The USC Nexus. For more information and to rsvp click here.

The Feminist Awakening in China
Tuesday, January 22 at UC Irvine, Humanities Gateway, Room 1010
The Long Institute will host a timely talk on the contemporary Chinese feminist movement with Leta Hong Fincher, author of Betraying Big Brother: The Feminist Awakening in China. What led to the recent rise of feminism in China and what are the implications of its growth? Through extensive research, Hong Fincher discovered a broad band of feminist activists, including performance artists, civil rights lawyers, and intellectuals. They sparked a feminist consciousness now growing among educated, urban women. She argues that these activists may pose the greatest challenge to China's authoritarian regime today. On January 22nd, Hong Fincher will discuss feminism in China, its intersection with the #MeToo movement, and why the Communist Party perceives the movement as a threat. For more information and free tickets, visit: https://www.eventbrite.com/e/the-feminist-awakening-in-china-tickets-54377966963 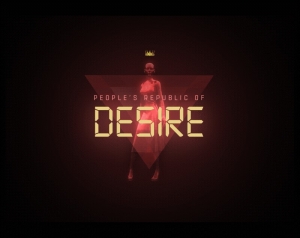 In an increasingly digital universe where live streamers earn as much as $200,000 a month, can virtual relationships replace real-life human connection? People's Republic of Desire, which is  directed by technology executive-turned-filmmaker Hao Wu, tells the stories of two such online Chinese stars who have risen from isolation to fame and fortune on NASDAQ-listed YY, China's largest live-streaming platform. Live-streaming showrooms have become virtual gathering places for hundreds of millions -- from the super rich, who lavish these online stars with digital gifts, to poor migrant workers who exhaust meager savings idolizing them. All of these characters are brought together in a series of bizarre online talent competitions, where they discover that happiness in their virtual world may be as elusive as in the real one. Please join Janet Yang for a Q&A with director Hao after the 7:00 pm showing on Saturday, December 1. For tickets, please click here. To watch the trailer, visit https://youtu.be/D_tQ44NOmXA

Los Angeles Chinese Film Festival
November 1-4 in Downtown LA
The Los Angeles Chinese Film Festival (LACFF) showcases and promotes excellence in Chinese language and heritage films, fostering cultural exchange through curated screenings and industry panels. The 2018 LACFF will take place at the Downtown Independent from November 1st to November 4th, and will feature a strong line-up of thoughtfully curated films, including opening night feature by Ruijin Li, Walking Past the Future, as well as closing night documentary, Linsanity, by Evan Leong. Many of the filmmakers will be present for Q&A sessions after their respective screenings. For more information on the panels and the detailed schedule of LACFF 2018, please visit www.lacff.org

Asian World Film Festival
October 24-November 1 in Century City
The Asian World Film Festival (AWFF) brings the best of a broad selection of Asian World cinema to Los Angeles in order to draw greater recognition to the region’s wealth of filmmakers, strengthening ties between the Asian and Hollywood film industries. Uniting through cross-cultural collaboration, the festival champions films from over 50 countries across Asia spanning from the Eastern shores of the Mediterranean to Japan and from Russia to China and Indonesia. All films that participate in the Festival will have a unique chance to be guided through the challenging awards season, and showcased for Motion Picture Academy, the Hollywood Foreign Press Association and all Guilds for enhanced exposure, media attention and awards consideration. For more information and tickets, please visit: http://asianworldfilmfest.org/2018/ticketing/

AI, Data Science & More...
October 20 at Los Angeles Convention Center
The International Data Engineering And Science Association (IDEAS) SoCal Data Science Conference is a data science learning platform to connect data science enthusiasts. It will demonstrate cutting-edge technology and feature a variety of data science experts covering topics including industry trend, data science application, open-source software, machine learning and many others. This is the must-attend event for anyone that is already in the field or just looking to expand their career network in the Data Science arena. To learn more about IDEAS and and the conference, click here.

China Onscreen Biennial
Opens October 19
Mark your calendars for the fourth iteration of the China Onscreen Biennial on October 19. The COB brings you acclaimed new films from Chinese directors, thought-provoking works by visual and sound artists, and cultural programming at the cutting edge. Screenings, talks and live performances will be held in multiple venues across Los Angeles until November 11. Audiences can also get an early start on the COB with pre-opening events on October 3 and 15. The COB will travel to Washington DC in November. New York will wrap up the 2018 bicoastal program on December 2. To learn more about COB, click here. 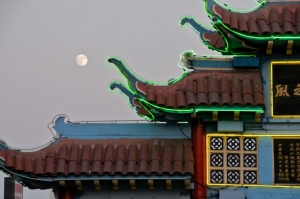 80th Annual Mid-Autumn Moon Festival
September 29 at Central Plaza, Chinatown
The annual Mid-Autumn Moon Festival celebrates the full harvest moon and is a time to give thanks for a bountiful harvest, and to celebrate and share the generous bounty with family. Celebrate with Los Angeles in Chinatown style! Traditional Chinese cultural demonstrations alongside hot local bands mark a celebration uniquely Angeleno and uniquely Chinatown. Come by for the annual Dessert Eating Competition, or to taste Mooncake samples from Chinatown’s popular bakeries, or to take a peek at the full moon in her glory through scientific telescopes! For more information, click here. 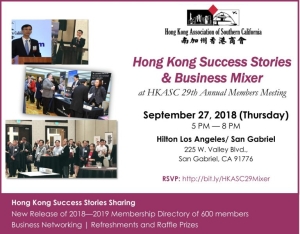 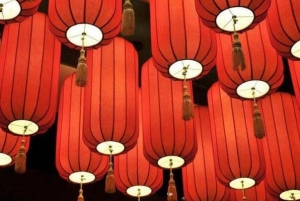 Mid-Autumn Festival at the Langham
September 23 at The Langham Huntington, Pasadena
Join The Langham Huntington, Pasadena for a spectacular Mid-Autumn Festival, the third event in their Heritage with Heart series! This night market-style dining celebration will include live music, a traditional Chinese dragon dance performance, children's lantern-making, and family-friendly interactive food stations like dim sum, noodles, tea, mooncakes and more, all served under a canopy of brightly-colored lanterns. Buy tickets here. 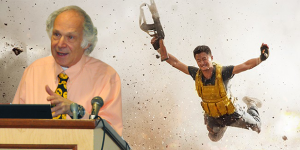 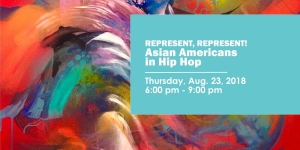 Asian Americans in Hip Hop: Music, Art, and Breaking Stereotypes
August 23 at the Chinese American Museum and Pico House
Asia Society Southern California is pleased to invite our members and friends to Represent, represent! Asian Americans in Hip Hop. The Chinese American Museum presents a summer evening of music by DJ Phatrick, refreshments and speakers on Asian-American representation in the hip hop industry. CAM will have extended hours so guests can first tour the related exhibition, Don't Believe the Hype: LA Asian Americans in Hip Hop, from 5:00 p.m. - 6:00 p.m. The exhibition explores hip hop as an outlet of expression and resistance, which disrupts the passive "model minority" stereotype of Asian-Americans. RSVP here via Eventbrite. 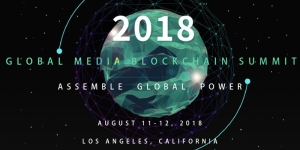 Global Media Blockchain Summit
August 11 and 12 at UCLA, Korn Convocation Hall
If you want to learn about this cutting-edge technology - and you really should - the 2018 Global Media Blockchain Summit is the place to be. Leading entrepreneurs and experts from the U.S. and China, where the government is pushing industry to develop blockchain, will discuss the technology's applications in finance, entertainment, gaming, cybersecurity and other fields. With six keynotes, 70 speakers in all and a gala dinner, the Summit offers the change to network and learn about U.S. and Chinese innovations in this fast-growing technology. Asia Society Southern California members and friends are entitled to a 70% discount on tickets. On the registration page, click the "Enter Promotional Code" link and type in ZEROONE70. To register, please click here. 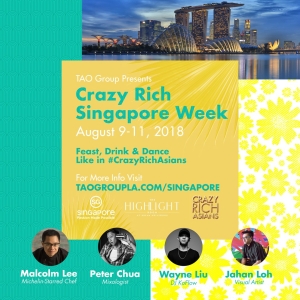 Crazy Rich Singapore Week
August 9-11 at Dream Hollywood
In honor of the opening of Crazy Rich Asians, the Singapore Tourism Board and TAO Group have organized "Crazy Rich Singapore Week", a pop-up even highlighting Singapore's food from Michelin-starred chef Malcolm Lee of Candlenut, cocktails by Peter Chua and nightlife with DJ Wayne Liu and visual artist Jahan Loh. This is a paid event and open to the public. For more information, please click here. 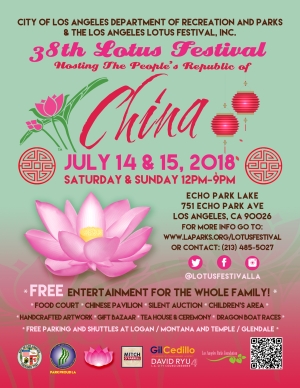 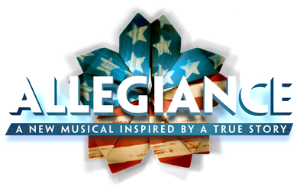 Allegiance: A New Musical Inspired by a True Story
Through April 1 at the Aratani Theater
Inspired by the true-life experience of George Takei, Allegiance follows one family’s extraordinary journey of resilience, bravery and redemption. Save 15% today with code ASIASOCIETY. Valid for performances March 1-31, sections A, B, C, D, except Sundays. 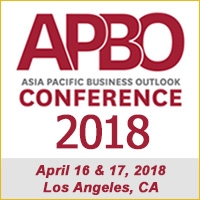 Asia/Pacific Business Outlook Conference
April 16-17 at the The L.A. Hotel
APBO is North America’s premier event for business leaders who want to expand their trade and investment in the region. Organized by the USC Marshall School of Business and the U.S. Department of Commerce, APBO provides business leaders with the contacts and the latest, relevant and valuable information available.