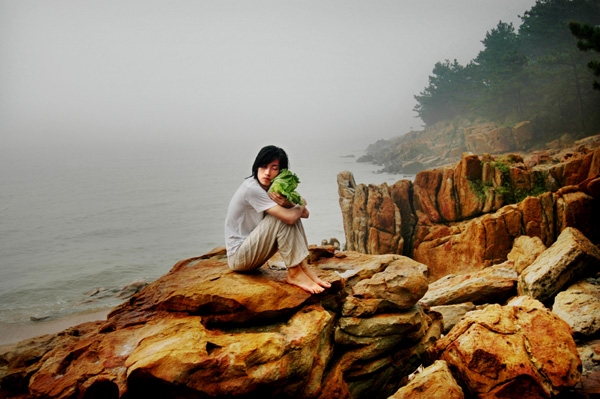 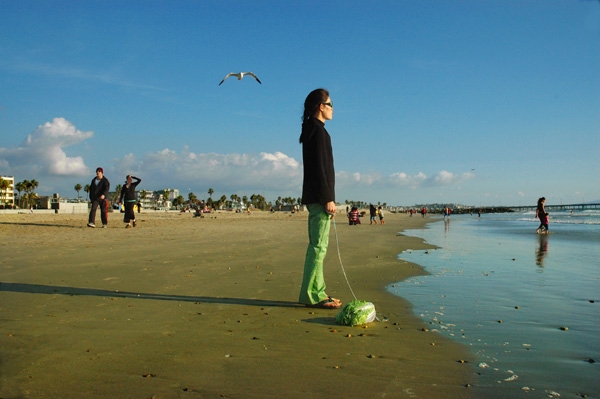 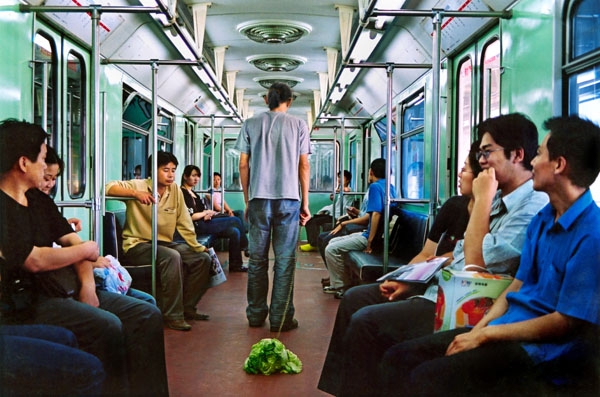 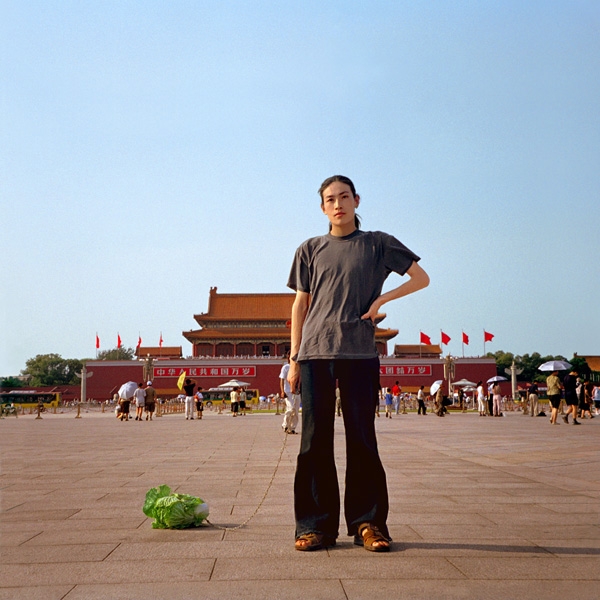 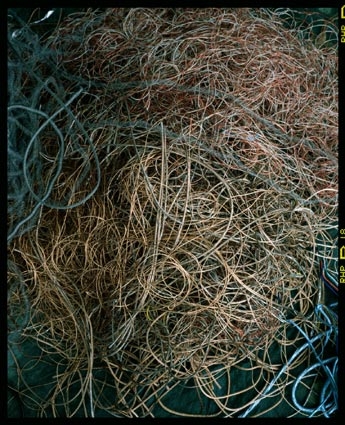 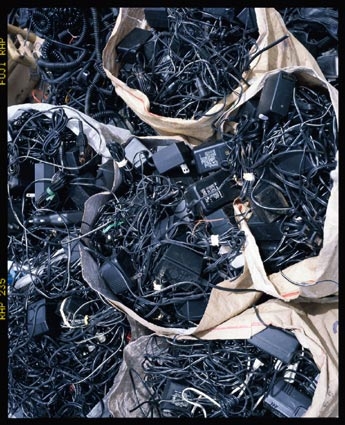 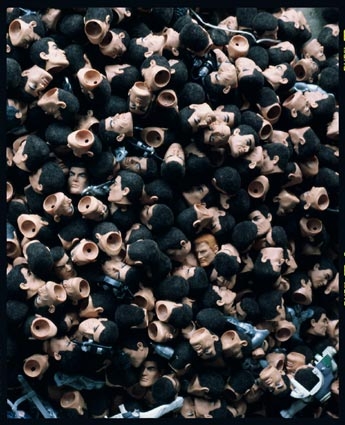 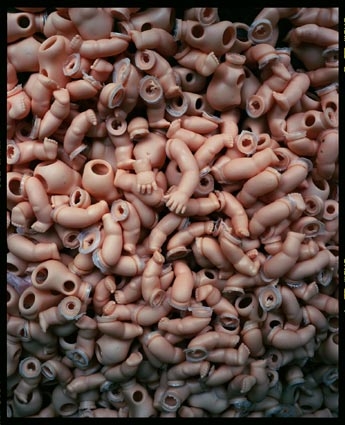 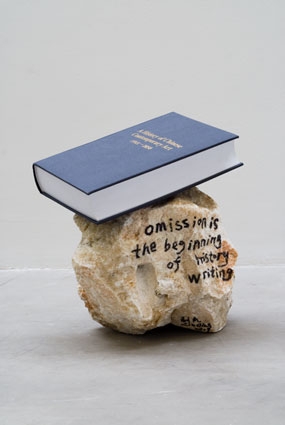 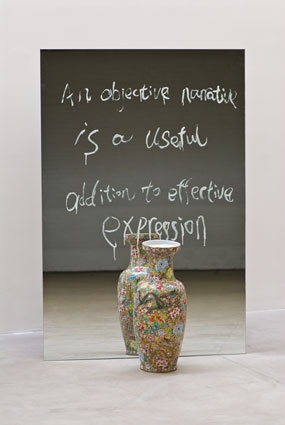 When Westerners think about contemporary Chinese art, the image of a bearded Ai Wei Wei or his middle finger flipping off Tiananmen Square may come to mind. The artist and documentary filmmaker has gained recognition in the West through his politically charged work. Yet, alongside Ai, there are other budding Chinese artists—practically unknown to Western audiences other than curators and art enthusiasts—who are working in creative, challenging, and unusual ways to make sense of their peculiar muse: China.

Many of these artists burst onto the scene after the chaos and confusion of Tiananmen. In the late 1980s, Chinese contemporary artists were given center stage at the Avant Garde Exhibition, the first of its kind in the country. Artists like Xu Bing and Yin Xiuzhen grew up in an urban China where the incessant construction and economic rise became sources of inspiration. Others like Xue Mo and Han Bing, however, were drawn to their rural roots and the remains of a traditional way of life.

To introduce Western and non-Chinese audiences to modern Chinese artists, the Asia Society Southern California offers profiles of eight creative individuals who strive to show a different side of the Middle Kingdom.

Xue Mo
Born in Inner Mongolia and trained in fine arts in Beijing, Xue Mo draws on her pastoral homeland whose “inherent beauty” has inspired many of her works. Xue mainly paints portraits of Inner Mongolian women, exploring their relationships with the region’s grasslands. Often called the “Chinese Vermeer,” Xue’s works are heavily influenced by the Renaissance style paintings she saw in Western Europe. Xue’s paintings maintain a traditional and “old China” feel. Her work has made its way to North America. In 2008, her “Mongolian Renaissance” was featured at the Diane Farris Gallery in Vancouver. In 2010, “Mongolian Girl” was shown at the Tao Water Galley in Massachusetts. Her most recent work, “Portrait, no portrait,” was shown in May this year at the Catherine Asquith Gallery in Melbourne.

Han Bing
Similar to Xue Mo, artist Han Bing also treasures the slow cadence of rural life. And he, or at least his walking partner—plain white cabbage—has become well known throughout China and abroad. His project, “Walking Cabbage” (2000- ) features Han and his cabbage, held on a metal leash as they walk about the world’s great metropolises, from Miami to Harajuku, through New York, Paris, Shanghai and Beijing. In March, Han’s collection “Reversed Dreams” was shown at the Hua Gallery in London.

Born in rural Jiangsu Province and trained at the Central Academy of Fine Arts in Beijing, Han works to understand China’s economic growth as it collides with traditional ways of living. Han believes this rise creates feelings of homelessness and meaningless attachment to material objects—cellphones, cars, purses, etc. Han’s cabbage is meant to interrupt or distract from the fast-paced city life, to force us to question what and why societies value some objects and not others. Overall, Han’s work—photography, performance, sculpture and installation—plays with the space between “modernity” and “tradition” in an effort to open up alternative creative dimensions.

Xu Bing
Until recently, Xu Bing may not have been a household name to New Yorkers. But since the debut of “The Phoenix” (2008), in early 2014, Xu Bing’s piece has become a grand attraction at the Cathedral Church of St. John the Divine. Born from the scrap metal and trash of a Beijing construction site were Xu’s two phoenixes, Feng, the male and Huang, the female. Xu says that the birds lived through great turmoil and hopes to show the “unrealized hopes and dreams” of an ever-changing China.

Currently Xu’s prints and installations are on view at museums in Taiwan. In addition to working as a full time artist, Xu is also the vice president of the Central Academy of Fine Arts (CAFA) in Beijing, China’s most prestigious art school.

Xing Danwen
A Xi’an native, Xing Danwen refined her photography skills at CAFA like many of the aforementioned artists. Much like them, she is continually struck by the growing divide between traditional life and a globalizing China. Xing travels around China to document what she sees as a “dislocation between cultural statuses.”

Xing’s “disCONNEXION” (2002) is a particularly interesting collection of photographs of recycled computer parts and electronic trash, originally sorted by migrant workers in Guangdong Province. Xing was shocked by the huge amount of e-waste and found the pile of electronics, whose use is to connect people together, rather peculiar. Her piece meant to highlight the connection between waste and cheap, migrant labor, as well as to show a darker side of China’s rise and labor migration. Currently, Xing’s photography is on view in a collection called “Convergences” at The Getty Center in Los Angeles.

Yue Minjun
Yue Minjun is well known throughout China and abroad for his depictions of laughing, grinning men. His work is often categorized as part of the Cynical Realism movement, which emerged in the 1980s and blossomed after the 1989 crackdown on pro-democracy demonstrators in Tiananmen Square. It is one part self-portrait and one part social commentary. The wide grins and blue skies in his paintings reflect a kind of utopia that has yet to be realized. Yue has said that “laughter is an expression of pain,” and that each of his paintings represents his experiences with this pain.
A child of the Cultural Revolution, Yue started working as an electrician in Hebei and took up painting as a hobby. Eventually, he enrolled at Hebei Normal University to study oil painting. It was there that he started developing ideas for the “Silly Laughter” series. In addition, Yue has painted various situational pieces and a series focused on traditional Chinese-type mazes. Today, Yue’s work is pessimistic and silly. It has been featured worldwide in London, Hong Kong and Paris, among other cities.

Liu Xiaodong
Liu Xiaodong was born in Liaoning Province and studied oil painting at CAFA, where he cultivated his unique style of neo-realism. In addition, Liu was an avid diarist and began working with young filmmakers and documentarians.

Liu is known for often traveling and living in different locations to paint “en plein air.” Two of his most famous “plein air” pieces were his projects, “Into Taihu,” which documents the people and rubble after the 2008 Sichuan earthquake, and “The Hotan Project,” which portrays daily life in Xinjiang Province. Liu spent one month in Hotan, a small town in Xinjiang, where he painted the local people amidst sandstorms and scorching heat. Liu’s one true goal as an artist is “to confront people and see them as they really are.” Currently, he has compiled a photo collection, Childhood Friends Getting Fat – Moving Image of Liu Xiaodong 1984-2014, which showed recently at the Shanghai Minsheng Art Museum.

Liu Ding
A native of Jiangsu Province, Liu Ding is a man of many talents. He is both an artist and a curator, capable of creating art through different mediums from painting and photography to set design and installation. Liu’s work questions the role of the artist and interrogates the traditional contexts of the audience, those involved in the work’s production, the museum, the gallery, and all of those affected by the creation of art.

One of his most interesting pieces, “Omission” (2009), questions how history is written and framed. Inscribed on a marble rock base are the words “Omission is the beginning of history writing.” On top of the rock, lies a made up art history text called “A History of Chinese Contemporary Art: 19XX to 2050.” Together these two objects create alternate histories which rely on omissions to exist.

Yin Xiuzhen
Yin Xiuzhen, another CAFA alumna, is one of China’s leading women artists. She focuses on the lives of individuals against the backdrop of increasing urbanization. To personalize her work, Yin uses recycled everyday objects such as clothing, suitcases, and other personal items. Yin strives to recreate and explore the lives of people who she says, are often neglected and driven out of our minds in times of intense economic development. In today’s China, Yin says, “‘Memory’ seems to vanish more quickly than everything else. That’s why preserving memory has become an alternative way of life.”

By stitching bits of clothing on top of suitcases, Yin recreated the buildings and skylines of a number of “Portable Cities,” featuring cities from around the world such as Paris, San Francisco, and Hangzhou. Finding inspiration for her “Cities” while at the airport, Yin says that each one emphasizes the ease with which people are able to pack up their lives and move from one city to another. Continuing her work made out of second hand goods, Yin has a showing of the Summer Group Show at the Pace Gallery in Beijing through September 2014.

Visit the following links to view some of his work:
http://www.ignant.de/2014/05/07/portable-cities-by-yin-xiuzhen/
http://www.beijingcommune.com/EnArtistsXQ.aspx?ID=51