The new Co-Chairs bring a wide range of talents and great enthusiasm. Soo is an award-winning global media and tech marketer recognized for her leadership in both category design and digital transformations. She currently serves as Senior Vice President of Growth Marketing for HBO Max. Soo, who was recently named on Ad Age’s 40 Under 40 list, also serves on Pinterest’s advisory board, Vox Media’s Brand Council, and co-chairs ASSC’s Programming Committee as well as the Asian Women Empowered (AWE) initiative. Gisser brings 25 years of experience as a cross-border business and legal affairs expert, having played a key role in building Skadden Arps’s vibrant presence in Asia. He led that practice and lived between Hong Kong, Beijing, Los Angeles and Silicon Valley for 25 years, structuring innovative, major transactions in four continents. A long-time advisory board member of ASSC, Gisser acts as a director and senior advisor to a number of companies in the U.S., Asia and Europe, including advising an activist investor and a leading European venture capital firm focusing on technology investing. 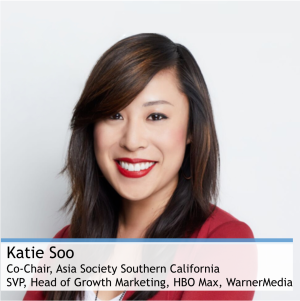 Katie Soo is an award-winning global media and tech marketer, recognized for her leadership in both category design and digital transformations. Soo’s work spans across branding and product strategy, building and launching new businesses, while serving as an advisor to startups and a mentor for founders.

Soo was recently recognized on Ad Age’s 40 Under 40 list and Goldhouse’s A100 list honoring the most impactful Asians in culture. She has also received numerous accolades from Promax, Webbys, Digiday and the Shorty Awards for her work in both creative storytelling and digital products. Soo sits on the board of Asia Society Southern California and California State University Entertainment Alliance. She is also a member of Pinterest’s Advisory Board, Vox Media’s Brand Council and is Co-Chair of AWE, Asian Women Empowered, an Asia Society Initiative. 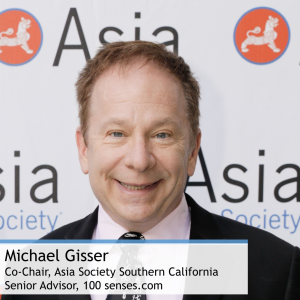 Michael Gisser brings his 25 years of experience as a cross-border business and legal affairs expert. He lived between Hong Kong, Beijing, Los Angeles and New York as Asia Practice leader for global law firm Skadden Arps, building that to seven offices and 200+ people, and was simultaneously a senior mergers and acquisitions partner in Los Angeles. Michael led innovative, major transactions all over the world involving Trip.com; Baidu, Youku and CNOOC in China; Indosat and Telkom Indonesia; Skype in Scandinavia; Centro Properties in Australia; large-capitalization companies in India and Singapore; and The Walt Disney Company and Juicy Couture in the U.S. A trained musician, Gisser studied at the Juilliard School in New York at the same time as Yo-Yo Ma and performed professionally with the Ringling Brothers Circus and many others.

Gisser has served on the Advisory Board of the ASSC for more than 15 years. He lives in Pacific Palisades, and currently serves in leadership and board positions for a number of established companies, as well as being a senior advisor to an activist investor and to a leading European venture capital firm focusing on technology investing.