Smashing the Myth of the Model Minority 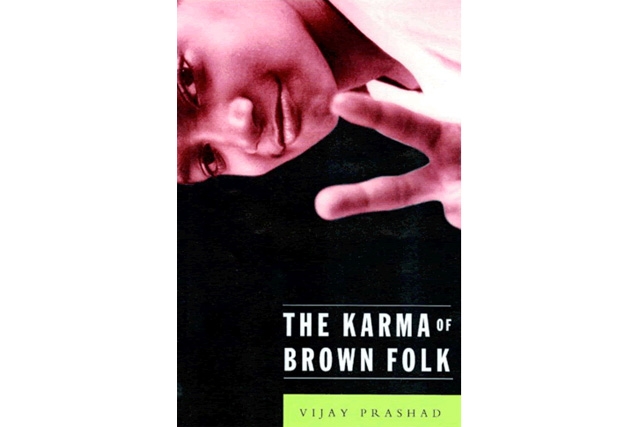 Vijay Prashad is the author of The Karma of Brown Folk, a South Asian American response to W.E.B. DuBois's The Souls of Black Folk. Challenging the stereotype of Asians as a model minority, the book reveals how South Asians are deployed as "weapons in the war against black America," and asks the probing question, "How does it feel to be a solution?" A well-known activist, Vijay Prashad is also an Assistant Professor of International Studies at Trinity College, a frequent columnist at Z Magazine and Little India and one of the organizers of Youth Solidarity Summer (YSS), a summer training program for radical South Asian youth activists. Additionally, he is the author of Untouchable Freedom: A Social History of a Dalit Community.

Can you talk a little about YSS? What are the goals of this organization and when was it started? Why is it important to teach South Asian American youth about the history of radicalism both in the U.S. and on the subcontinent?

A small group of us, affiliated with the Forum of Indian Leftists (FOIL), started YSS in late 1996 for two main reasons. First, we were very concerned about the youth camps started by the Hindu Right, many of which claimed to address the problems of Indian American youth, but which more often than not simply provided them with chauvanisms of various kinds. Second, and more importantly, many of us in FOIL had been in touch with second-generation South Asian American progressive youth who had a real hard time being radical desis. Many felt that to be desi was to be conservative, and to be radical was to be not desi. We wanted to provide these young people with a way to be radical desis, to feel what it is like to be part of the heritage of Ghadar, in line with the Ghadar Party founded in 1913 by radical desis in San Francisco. Since 1997, the year of the first YSS, we've had over a hundred people go through YSS and most of these young people, like the 30 who came this year, have given us so much strength, as they return to their communities to provide radical leadership. Our collective of 12, all volunteers, who run the program with almost no money, are thrilled by the humble, but crucial success of YSS.

Why did YSS chose to stand on the sidelines of this year's Indian Independence Day Parade [in New York] rather than march? Why do you think the parade has become such a contested ground for defining "Indianness" and Indian identity in New York?

I think radical people are often more comfortable in demonstrations or marches than parades. In demonstrations people join together and participate collectively. Everyone marches. In a parade, only a few march and the rest are asked to watch rather passively. I wish we could have a desi March Against Racism and Intolerance rather than an India Day Parade. We have much to celebrate, but we also have many more collective struggles. I'm into taking up space in midtown Manhattan and sending a message that we are here, we belong, we can walk down the street without apology and fear. I like that feeling, and you can see that in the eyes of the desis during the Parade. But the Parade really fails to empower us. The 'leadership' uses the Parade as a photo opportunity to gain power for themselves, and we're not comfortable giving more power to them. Which is why we like to stand on the sidelines and jeer and cheer. Also, the parade has, since 1981, become more and more corporate and less of a community institution. What does Dunkin Donuts have to do with India Day? Or the airlines, insurance companies, TV stations? We're into being on the sidelines, making a space for people to move from being spectators to being spect-actors. Yes it is a fight over desiness, and we want to fight it from the massified margins and not from the middle of the street.

I think that the elections don't seem to have any impact upon the desis this year. The Yankee Hindutva types are nonplussed over the elections because both parties will enable them to be 'patriotic.' It is ironic that these 'patriots' are the first to shovel cash into the coffers of the Republicans (they are most favored by the Right for obvious reasons). Their 'patriotism' is simple: they are jingoistic for whomever will allow them the freedom to make money. Whether saffron or red/white/blue, these cats are heavily into the green. But the bulk of the desis who run for office do so on the Democratic ticket, mainly because of the Democrats' historical association with people of color. But they are given tickets in races that cannot be won. There are no desis in major elected office, this not from want of trying. Besides many of those who run are rank opportunists who do not have deep links to the community, but who come to it for money with the claim that 'don't you want an Indian in Congress'? Why? Just because they are 'Indian'? Absurd. And what are issues that motivate desis? Things to do with the 'homeland' or things that have to do with the exploitation and oppression of desis and others in the U.S.? No politician in this election is running on a platform to make the immigration policy, especially H1B, a policy for people and not for capital. Bill Gates is their boy regardless of the law-suits, whereas the Indian cyber-coolies are to be burned over and over. And even this issue will divide desis, since some of the most sophisticated exploiters of desi technical labor are other desis (such as in Silicon Valley).

As you note in The Karma of Brown Folk, the VHP is incredibly popular abroad. Why do you think they have achieved this form of popularity in the diaspora?

Several years ago, Biju Mathew and I began to investigate and write about the VHP, and found that it gained popularity because of an opening afforded it by the liberal state. Under pressure from people of color, the U.S. state grudgingly accepted the idea of multiculturalism, in which each 'culture' was to be somehow tolerated. The idea of 'culture' embraced by the state was static and without history, and the arbiter of 'culture' was to be the orthodoxy. Since 'India' was seen as spiritual, the 'culture' of India was seen as religion, mainly Hinduism. The VHPA was sanctified to begin its exertions amongst the Indian Americans due to this, and it used its massive resources and terrific organization to propagate a rather virulent brand of chauvinism. In my book, I show how it tackles the racism felt by desis with a racism of its own. Biju and I also have an article on this theme in the recent issue of the English journal Ethnic and Racial Studies.

In The Karma of Brown Folk, you speak a lot of the subtext involved in the discussion of Indians as a model minority. Your claim is that white praise for the success of Indian immigrants is at the expense of the Black and Latino working poor. Can you talk a little about how this "model minority" myth functions? How can South Asians resist this "model minority" label?

The basic idea is this: Dinesh D'Souza asks, "why can't an African American be more like an Asian?'" The basic assumption is that Asians are somehow superior to African Americans and Latinos. These conservatives then claim that it is family structure and discipline that accounts for this difference, and not racism, for Asians are also 'minorities.' What they disregard is the historical process of the construction of Asians in the U.S. We came here not as enslaved people, but as technical workers through the good graces of the immigration regime. Our success, I argue in the book, is not a result of Natural Selection, but of State Selection. You have to read the book to see how to fight this, but my main idea is for us to commit model minority suicide!

In your book you do a good job of uncovering a history of solidarity among Indians and Blacks. Have you seen much coalition-building between South Asian and African American youth in the U.S. today? Do issue-based coalitions (like those against police brutality or for the rights of taxi drivers) hold up for other issues as well?

Of course. I'm on the Board of the Center for Third World Organizing in Oakland, CA. At CTWO we've seen so many desis who want to work on social justice themes. For several years, the executive director of CTWO was Rinku Sen. Rinku, people like Urvashi Vaid at the National Gay and Lesbian Task Force, Arvind Ganeshan formerly of Human Rights Watch, Amit Pal of the Progressive Media Project, these are examples of a few people who are part of building the terrain of solidarity. I think of the New York Taxi Workers Alliance as more than an issue-based coalition. It is an alliance of immigrant workers, and it is on the terrain of immigrant work that many new forms of solidarity will be constructed. I want to write a book with the title Is Immigrant a Type of Race which will develop this theme. I'm currently writing a book Raw Skin'(Beacon Press, 2001) which is about Afro-Asian solidarity. There is much to look at here and more to look forward to politically.

What do you make of the use of the term "desi" in the U.S.? Do you think this means the second generation has formed an identity over and above political boundaries on the subcontinent?

I love the word 'desi.' It is so beautiful. I can go around saying it over and over again. I'm of the view that it is the best word to describe ourselves. Phrases like African Americacan, Asian American, Hispanic American, etc. are bureaucratic words that do not hold within them the revolutionary aspirations and histories of a people (categorized but not controlled). I prefer words like Black, desi, Latino, Chicano, because these words raise associations of struggles, such as the Black Power movement ('Black is Beautiful,' etc.), the Chicano struggles of the farm workers, of La Raza, and what not. Desi seems to be a similar word, one filled with so much historical emotion. And again, it is an ironic word, because it means of the homeland, but it does not say what that homeland is. We who use it do not hearken back to the 'homeland' of the subcontinent, because we are generally not nationalistic in that sense. Our homeland is an imaginary one that stretches from Jackson Heights to the Ghadar Party, from the rallies against Dotbusters to the Komagata Maru, from the 1965 Immigration Act to Devon Street. This is a homeland that we can relate to and it is what makes us feel like we belong in something of a collectivity. Hence desi. And [the term] is under construction.