The Slums of Asia | Asia Society Skip to main content

The Slums of Asia 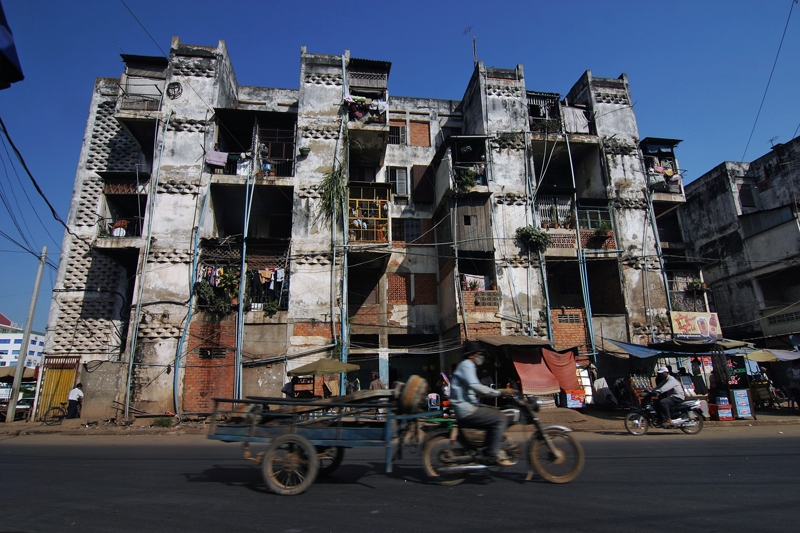 This article was taken from Asian Coalition for Housing Rights (ACHR) Newsletter entitled Housing by People in Asia. SDI (see below) is an acronym for a group of organizations that works on housing issues throughout Asia. South Africa is also included as the South Africans and Asians have worked together through a variety of exchange programs to learn from common experiences.

We were thinking about the SDI acronym, and how it’s good that the name is convertible, so it can read “Slum” or “Shack" Dwellers International, depending on where you are. That got us thinking about other words for slum, not all of which begin with an “s”. And that got us thinking about how all these different words describe a lot of different, sometimes culturally sticky attitudes towards poor settlements, and towards poor people’s right to be there. Words can pack a real propaganda wallop, and even the most harmless-sounding term can subtly influence our attitudes towards the cities we live in and the problems they face. Let’s take an etymological tour around Asia and see what’s behind some of the words for slum in use.

CAMBODIA
The older Khmer word for a poor settlement is sahakhum, and the people who live in them, Nea Kreikror Tikrung (poor urban people). But after forty years of war, upheaval, genocide and poverty in Cambodia, there’s a newer, creepier term : Samnong Anatepatai (an illegal, lawless or anarchic building or settlement), used to describe squatters and squatter settlements. It isn’t always easy to distinguish between squatters and owners in Phnom Penh, a city which was emptied out by the Khmer Rouge, and reclaimed five years later by whoever was brave enough to crawl out of the jungle and claim a room or a house or a piece of land as their own. In a context where everyone was very recently a squatter, and anarchy was the rule, no wonder nobody wants to be identified by Samnong Anatepatai or squatter. When Phnom Penh’s municipal cabinet chief, Man Choeurn, returned from a trip to Thailand and India last year, he called a meeting of the city’s district chiefs, and described how the exposure visits had given all of them a greater understanding of potential solutions to the city’s poor settlements and announced that “squatters” would henceforth be officially “urban poor who are a legitimate part of the city and need to be integrated into the city’s development.” SUPF followed up with their own name change from “Squatter” to Solidarity for the Urban Poor Federation.

INDIA
There are dozens of languages spoken in India, and in a country so filled with slums, you can bet there are hundreds of terms for poor and informal settlements. In Marathi, for example, a language in Western India, the term city officials use for a slum is gallicha wasti (dirty settlement), but slum-dwellers drop the gallicha and just say amchi wasti (our settlement), and call a hutment (which is itself a word peculiar to Indian English) in a wasti a zopadi. Alkabai Kamble is a Mahila Milan leader in Pune. She lives in a slum which has successfully negotiated for alternative land, and has now finished constructing it’s own two-story housing block. Alkabai has been trying to get her daughter Chaya married, but is waiting to start inviting marriage proposals until after she moves into the building. She knows that Chaya’s status and position in the marriage market will rise sharply the minute she becomes a girl from a building, instead of from a wasti and, as a result, will land a much better groom. A wasti (according to Alkabai) is a place where people live who are “bad, dirty and poor!”

JAPAN
The official term for an illegal or informal settlement in Japan is huho sengkyo (illegal occupation). Another not-so-nice term for illegal settlement suggests crime and lawlessness, and carries a stigma of shame : hin min kutsu (gang of poor people). Dambo muro (cardboard village) is a specific term for the cardboard settlements which line the underground walkways in Tokyo’s Shinjuku Station, and tento muro (tent village) the term for the temporary vinyl houses built by homeless construction labourers along the Sumida River. The men who actually live in those vinyl houses or in those subways, though, might prefer to refer to themselves as nojuku rodosha (sleeping outside labourers), a more neutral description of their situation, or rojo seikatsu (on-the-road livelihood), which describes with some pride the kind of homeless workers who are mostly male, single and unattached, and emphasizes their work rather than their homelessness.

KOREA
Muhoga Chongchakji (settlement without permission) is the legal, technical term city planners use, who find it more convenient to look upon poor districts of Seoul as illegal rather than as traditional or alternative housing. Taldongne and Sandongne (moon village) and (mountain village) are more recent and more poetic terms for the informal settlements which came into the city with the flood of rural migrants in the 1960s. These terms probably refer to the location of Seoul’s poor settlements, many of which were built on the steep hill-slopes and undevelopable hilltops throughout the city, where the moon was indeed a bit closer.

MALAYSIA & INDONESIA
Bahasa Indonesia and Bahasa Malaysia are similar languages, and have most slum words in common. In both languages, kampong is the word for village, community or settlement, and rumah is the word for house. Kampong kumuh is a kampong with legal tenure but bad living conditions, and kampong liar is an illegal settlement. In Malaysia, setinggan is a specific word for squatter, or one who illegally occupies a place, and although used officially, it’s a bad word and carries connotations of criminality. A new term for informal settlements, though, is making inroads in Malaysia: Hak milik (rights owned by the people). Here is a case where a people’s movement has coined and extended it’s own term for their situation, as a means of moving away from the old equations.

PAKISTAN
The Urdu word katchi is a widely-useable word - it can mean variously unfinished, rough, simple, unofficial, temporary, uncooked, even unripe! But katchi carries along few negative connotations - it’s a straightforward, workaday descriptive term. Abadi means quarter or neighborhood or settlement. Perhaps that’s why katchi abadi has become the official and common term for the informal settlements that are home to nearly half of Karachi’s population, with an entire government department devoted to Katchi Abadi Regularisation. The opposite of katchi is pucca, which can mean proper, official. They also use the Urdu word basti for small settlements, and the English word Colony for big ones.

SOUTH AFRICA
The English word shack (where black people lived) has colonial overtones which naturally call to mind the villas and bungalows set in their a big gardens (where white people lived). But English is the first language of only nine percent of South Africa’s 38 million people. Besides the other colonial language Afrikaans, there are at least ten main black South African languages. One is Zulu. UmKhuku is the Zulu word for chicken coop, and this vividly descriptive term is commonly used to describe both shacks and shack settlements. uMjondolo is the more proper Zulu word for shack, and the name for South African Homeless Peoples Federation in Zulu is uMfelandaWonye WaBantu Base Mjondolo (togetherness of the people who live in shacks).

SRI LANKA
The official term for shanty settlement in Singhalese is palpath. The first palpaths appeared along the canals in Colombo in the early 1960s. It’s an ugly term which emphasizes illegality and temporariness, and nobody living in informal settlements uses it. Muddukku is the term for legal, privately-built, rental housing, which for over a century was the main source of affordable housing for Colombo’s poor laborers and port workers. Most muddukkus were built in the form of lines of single-room row-houses, with shared water taps and toilets, and most are in bad shape now, congested and deteriorated, their open spaces filled with extra squatters (palpaths). Watta (garden) is the euphemism Sri Lanka’s muddukku and palpath-dwellers prefer to call their settlements. So you have slums with names like Polwatta (coconut garden) and Kurundwatta (cinnamon garden). But there are no wattas in these wattas! This bit of wishful thinking suggests pride-of-place and hints at aspirations to the more garden-like housing colonies of wealthier Sri Lankans.

THAILAND
Fifty years ago, Bangkok was a city of wooden houses, squelchy bogs, rickety boardwalks and muddy klongs, just like the rest of this very watery country. A little embarrassed of its humble, pre-urban past, the glitzy modern urban Thailand tends to stigmatize what is old, small and wooden, and glorify what is new, huge and concrete. The word chumchon (community) is a little vague - it doesn’t necessarily mean poor or run-down, doesn’t necessarily mean illegal. Chumchon bukruk (illegal community) is the old term used by government officials for illegal squatter settlement, but people never used it. Chumchon bukberk (pioneering community) is a term people preferred, since it puts a more upbeat light on the process of informal settling. These two terms, or simply chumchon, were the terms in commun use until 1982, when the National Housing Authority adopted the more descriptive and less political Chumchon Aai-aat (crowded community) as the official government term.

VIETNAM
During the Vietnam War (or, "the American War" as it's known in Vietnam...), a new term for the house of a poor person became widely used : Nhaa o chuot (house for rats) and Khu nha o chuot (a settlement of rat’s houses). The more formal, legal terms for slum houses and slum communities are Nhaa tam bo (temporary house) and Nhaa lup xup (precarious house). More specific terms for houses found in Vietnam’s many canal side slums include Nhaa ven song (house along the river) and Nhaa ven kinh rach (house along the canal).

A FEW OTHERS
In Bangladesh, sukumbashi is the word for squatters, or people without shelter, and sukumbashi basti is the term for a homeless people’s settlement. And a little North of Bangladesh, in Nepal, the word for shack or poor-quality house is chapro. Lots of the poor settlements in Kathmandu are occupied by members of the same caste and bear the names of their caste-inhabitants or that caste’s traditional task, so there are sweepers colonies, butchers colonies, etc. In Nepal, official bodies have borrowed the English words squatter settlement and slum, and use them generally to distinguish between settlements which are illegal and settlements which are dilapidated but have legal tenure. The Philippines is a bit of an etymological disappointment, perhaps owing to “300 years of colonial Spanish rule and 50 years of Hollywood.” All efforts to unearth words in Tagalog or other Philippine languages proved fruitless. Everyone we know seems to have taken to the standard terms from “NGO-Speak” - slum, squatter, squatter settlement, informal community, etc.