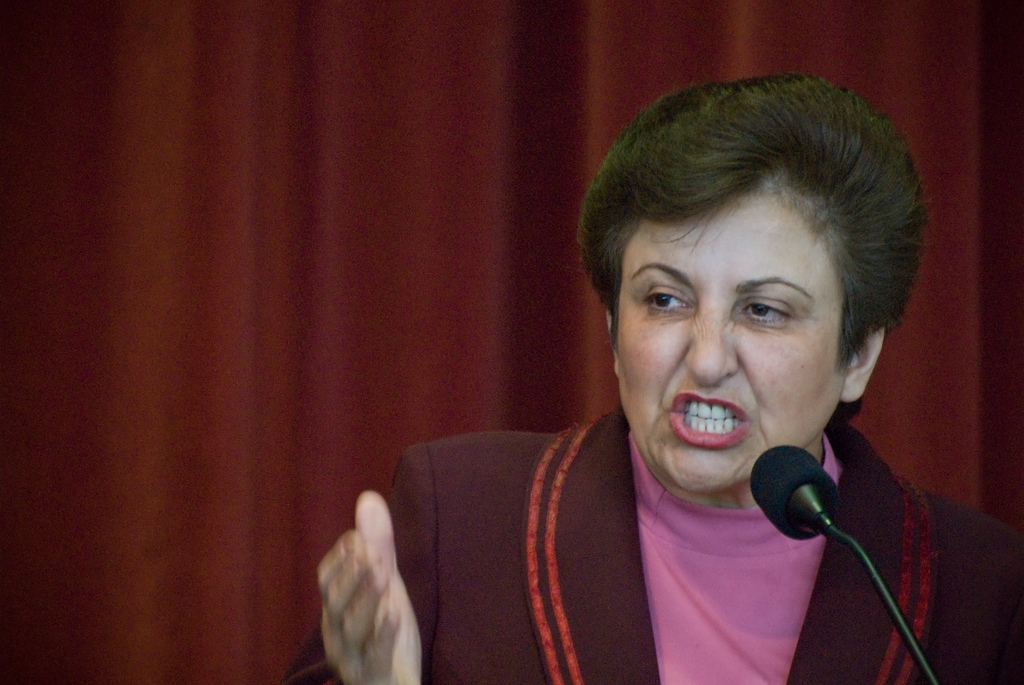 NEW YORK, June 10, 2004 - Shirin Ebadi, Iranian lawyer and human rights activist, was awarded the 2003 Nobel Peace Prize for her work promoting democracy and human rights. Ebadi has led efforts to change Iran's discriminatory laws against women, to provide more protection for street children, and to free those detained for expressing their opposition to the government. She has continued her advocacy despite detention, suspension from legal practice, and repeated threats to her security.

Ebadi spoke to the Asia Society while she was in New York for the Citigroup Series on Asian Women Leaders at Asia Society on Islam and Human Rights.

AsiaSociety.org is grateful to Banafsheh Keynoush for her work as interpreter during this interview.

How did you become interested in the field of human rights?

Everyone is born with certain characteristics. I always had a feeling during childhood, almost like a calling, which I could not name then but I later found that it was about seeking justice, a certain commitment to justice. When I was a child, whenever I would see children fighting, I would naturally try to defend the underdog, the weakest. I even got beaten up myself a couple of times doing that!

After the Revolution, we were told that women, according to Islam, could not be magistrates or judges. So as soon as it became possible for me to do so, I decided to retire prematurely. Following which I requested a license from the Iranian Bar Association to practice law. I was turned down for seven years, although in that same time period others were given the same license. The reason was that I have always had a sharp tongue! Once I did get the license to practice, I knew exactly where I was headed, and that was towards the defense of human rights as a means to getting justice.

What kind of human rights work have you principally been involved in?

In practice too I have been active. Along with a couple of others, I set up an association for the defense of the rights of the child aimed at disseminating and promoting the International Convention on the Rights of the Child in Iran. Fortunately, this NGO has been quite successful. I was also able to set up another NGO with the help of a number of lawyers. In this NGO, we offer pro bono legal services to political defendants and those who are sent to prison for ideological reasons. We also provide support to the relatives of political prisoners. We raise awareness or at times publish declarations in areas where human rights have been violated.

Following the Nobel, I have also set up another NGO for de-mining.

Why do you think that in contemporary debates, Islam is frequently viewed as incompatible with human rights?

Unfortunately the human rights situation is not very good in most Islamic countries. When people object to cases of human rights violations, they are told that Islam and human rights are, in essence, incompatible. It is claimed that governments are observing Islamic rules and regulations. By doing so, that is, by invoking religion, these governments are clearly attempting to silence those who object. But this is absolutely incorrect. Islamic studies show us that Islam has no incompatibility with human rights.

On the other hand, the advocates of the so-called "clash of civilizations" thesis are also interested in making the case that Islam and human rights are incompatible. In making this argument, they are suggesting that Islam and democracy are incompatible and that the clash between Western and Eastern civilizations is inevitable. To make their task easier, they resort to phrases such as "Islamic" terrorism. A single, terrible deed carried out by a Muslim, according to them, is a result of the fact that they are Muslim. Whereas, obviously, anyone can engage in wrongful acts. To take one example: in Bosnia there were those who did terrible things, but we did not say that those acts were committed in the name of Christianity, or that Christianity was responsible. Or in Palestine for that matter: the Israeli government has not implemented any UN resolution that has been issued so far, but we do not blame Judaism for this inaction. So it is not clear to us why when one Islamic group is responsible for an act of violence, everyone in the world starts talking about it as Islamic terrorism.

So those who believe that democracy and Islam are incompatible fall in the following categories: first, Westerners who are advocates of war; and second, some Islamic governments that are also dictatorial regimes that violate the rights of their people (and seek legitimacy for doing so).

Next: "Human rights are indivisible."

You have said elsewhere that, "The discriminatory plight of women in Islamic states, too, whether in the sphere of civil law or in the realm of social, political and cultural justice, has its roots in the patriarchal and male-dominated culture prevailing in these societies, not in Islam." How do you understand the difference between culture and religion?

Culture is more deep-rooted than religion. Several factors combine to constitute the culture of a nation, one of which is religion. Like any other ideology, religion is open to interpretation. It is the culture of a society that offers its own interpretation of what religion should constitute. For instance, there have been various interpretations of socialism: was the former Soviet Union administered in the same manner as China considering they both followed a similar ideology? Is Cuba administered the same way as Albania was under socialism?

In the present global dispensation, there seems to be greater emphasis placed on civil and political rights rather than on economic and social rights. Why is this the case and how, if at all, would you like to see this change?

In the context of large - and in some cases, increasing - inequalities between and within states, how can human rights be guaranteed? In other words, do you think structural change at the global or national level may be necessary before every human being can be granted some measure of dignity and freedom?

Yes, organizations like the UN and the World Bank need restructuring. For example, when the right to veto is granted in the Security Council, is it possible to talk of democracy at a global level? This means that if all the countries of the world are on one side and only one of the five permanent members of the Security Council is on the other side and chooses to exercise its veto power, it can override the will of the rest of the world.

To take another example, when the World Bank offers loans to undemocratic countries, it is an injustice to the people of those countries. Look at how much, in terms of loans, Saddam Hussein may have received during his time in power. Now, with Saddam Hussein overthrown, it is the people of Iraq who have to repay these debts. I deem it necessary to stress that for the majority of the time that Saddam Hussein was in power, Iraq was favored by the United States, and it was through the support of the United States that Iraq was able to receive loans from the World Bank. And now the people of Iraq are left with millions of dollars in debt. Saddam Hussein is not the only dictator who received such loans. This has unfortunately happened in many parts of the world. Therefore it is very important not to offer any form of support to countries that are undemocratic and violate human rights.

What impact do you think the war on terrorism has had on human rights globally?

The war on terrorism is a legitimate fight and must be carried out. However it should not become an excuse for violating human rights. Fighting for human rights should be within the framework of the United Nations. At the same time, terrorists should be arrested and prosecuted. But given the large number of terrorists that have already been arrested and prosecuted, have we been able to mitigate terrorism or its impacts? Obviously not. The reason is that prosecuting terrorists alone is not sufficient. One must approach terrorism by addressing its root causes. Terrorism emanates from two basic sources: one is in prejudice. Prejudice results from ignorance and the lack of education. If we seek to eradicate illiteracy globally, we are in fact taking steps to control and fight terrorism. The second root of terrorism is injustice. We must seek to reduce the sources of injustice in the world. If these two root causes are taken away, we will surely be able to get rid of terrorism as well.