The Shanghai Expo: Inside 'The World's Largest Event' 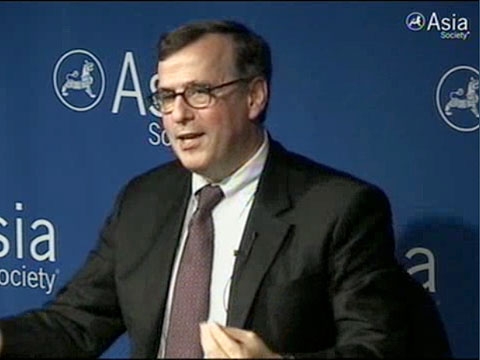 NEW YORK, August 26, 2010 - "The Shanghai Expo, at an annualized rate about 150 million people a year, would be something like eight or nine times what the number one theme park in the world does, which is Disney World," said ambassador Frank Lavin, Chairman of the USA Pavilion's Steering Committee, referring to the number of people who will visit the 2010 Expo. "In fact, it is not just the largest World's Fair in history, but this is the largest event in human history."

Speaking at Asia Society's New York Headquarters, the former US Ambassador to Singapore was sharing his insider's perspective on the Shanghai Expo, the latest incarnation of the World's Fair that runs from May 1 to October 31, 2010.

Lavin helped organize this year's United States Pavilion. He explained that since the average Expo attendee spends only 30 minutes in each pavilion, early decisions were made not to treat the American exhibit as a "college seminar course in US history," but to present a "show, don't tell" narrative of American society and culture.

By exposing millions of Chinese to unfamiliar countries and cultures, Lavin said the Expo is an important opportunity to educate the country's citizens about the rest of the world. Although 47 million Chinese will travel abroad this year, more than 50 percent will only visit the semi-autonomous enclaves of Hong Kong and Macao. With over 90 percent of the 70 million fairgoers Chinese, the Expo is accessible to a much larger population of Chinese citizens who want to experience foreign cultures.

Asked about how the United States pavilion's message will help its public diplomacy with China, Lavin responded, "Of course there are many issues where the United States and China have different points of view."  But at the American Pavilion, "The average Chinese fairgoer is going to see that he or she has a lot in common with the same American in a similar position." He concluded that the media tends to only focus on a few disagreements, rather than the many points of commonality, between China and America.

Although the 2010 Expo will be the most attended event in human history, American attendance is quite low. Lavin noted, however, that this isn't because Americans aren't interested in foreign cultures; rather, "When an American goes to visit China, he is not going to go to the Expo. He is going to go to the Great Wall, Summer Palace, Forbidden City, and see the sights of Beijing and Shanghai."