Sanctions in the North Korean Context 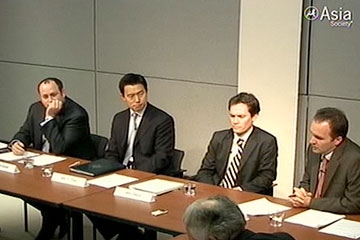 NEW YORK, November 3, 2009 - A panel of experts scrutinized the state of the United States' policy of sanctions against North Korea and debated the merits of engagement with the isolated nation.  With North Korea appearing once again poised to enter a phase of relative openness, the panelists analyzed the complex portfolio of foreign policy tools at the Obama administration's disposal.

Speaking at Asia Society headquarters in New York, Daniel Glaser, U.S. Treasury Deputy Assistant Secretary of State for Terrorist Financing and Financial Crimes, outlined the current state of the international sanctions regime against North Korea. The primary goal of sanctions, Glaser argued, was not to advance foreign policy or national security aims in the DPRK, but rather "to protect the international financial system from abuse, in North Korea's case protecting the international financial system from North Korea's deceptive, non-transparent and illicit financial conduct."  The US approach is to "start with sanctions policy-how do sanctions work-and then place the North Korea situation into that context." Glaser's co-panelists, however, noted the precarious status quo engendered by the decades of sanctions.

John S. Park, Senior Research Associate at the United States Institute of Peace, emphasized the complex linkages between the so-called hermit kingdom and the region, particularly China. "Premier Wen Jiabao's visit to Pyongyang last month was something of a game-changer.  For North Korea, that visit symbolized very important political investment into the future of North Korea.  Whereas the U.S. Has looked at North Korea's future and seen uncertainty, the Chinese are being very strong in their assurances to the Koreans that they see mutual prosperity.  The question is what form does this take?"  The complex links in trade, finance and energy that bind North Korea to the rest of Asia, must be taken into account, Park argued, for any sanctions or engagement policy to function effectively.

Citing the Asia Society Task Force Report, North Korea Inside Out, John Delury of the Asia Society proposed economic engagement as a new option for addressing the North Korea problem.  Noting the necessity of sanctions in the short term, Delury argued that they offer the United States no new, long-run solutions to DPRK issue.  The United States should acknowledge the flaws in the current system and the reality of North Korea's relationship with U.S. allies and partners in the region.  "We all know the most remarkable thing about the North Korean regime is their degree of isolation.  The problem with a sanctions approach is essentially what it does is isolate.  I would say that the regime responds well to isolation-engagement would put a lot more pressure on them than sanctions."

In recent weeks, the U.S. has reiterated its commitment to the Six-Party Talks and its firm stance on denuclearization. But with the North Koreans on the verge of rejoining bilateral or multilateral talks on the nuclear issue, the next few months will show whether Washington is open to new forms of engagement with Pyongyang.