The Road to Fiscal Consolidation in India 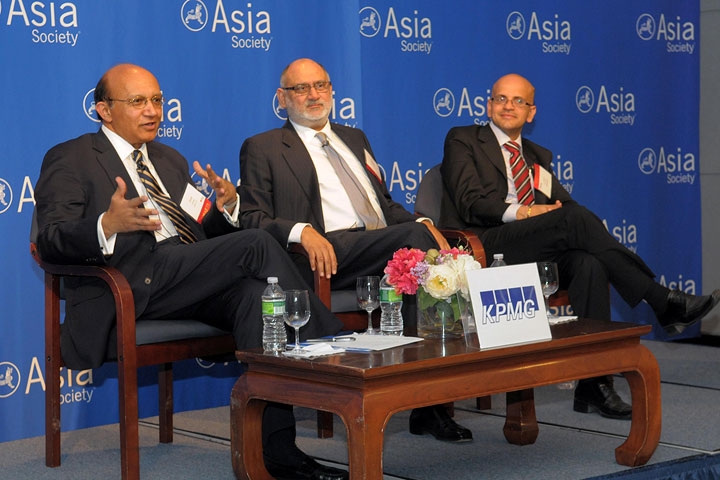 NEW YORK, March 2, 2010 - After much anticipation, the Indian Union Budget was presented by Pranab Mukherjee, India's Finance Minister, on Friday, February 26, 2010. With the budget proposals in hand, experts convened at the Asia Society's New York Center to provide different insights into the future of the Indian economy.

This year's budget outlined three goals for India's economy—reverting to high gross domestic product growth, inclusive development, and institutional reforms. The budget proposals presented an optimistic outlook, but whether they help the government to achieve its intended goals will be put to test only when the budget plans are implemented, at the start of the fiscal year (April 1).

In the discussion, Arun Kumar, partner at KPMG's US-India practice, said that the importance of economic growth to India helped account for the the hype surrounding the Union Budget, quoting a friend who described the country as suffering from "budget mania." Kumar saw two ways of looking at this phenomenon. First, the close attention paid to the Union Budget is healthy since it allows significant public discussion on a vital piece of legislation. Second, the budget should become a process rather than an event. So, instead of expecting a breakthrough change, it is important to focus on resource-raising allocations and long-term vision. In order to fulfill this economic growth, Kumar quoted Mukherjee as saying that the Union Budget has to "reflect the government's vision and signal policies to come in the future."

Giresh Vanvari, Executive Director of KPMG Advisory Services Ltd., then provided an overview of the Budget by pointing out some of its key issues and prospects. In Vanvari's view, several challenges currently prevent growth in India, including inflation, a fiscal deficit, and sectors that prevent Foreign Direct Investment (FDI). Nonetheless, Vanvari said the government will be able to focus on the theme of "growth" by simplifying and liberalizing the FDI and banking sector, focusing on infrastructure development, and supporting special sectors such as agriculture, health, education, and small-scale industries.

While recognizing the uncertainties and downside of the current situation, Ajay Chhibber, Assistant Administrator and Director, Regional Bureau for Asia and the Pacific, UNDP, viewed the budget as a sensible means for charting growth and fiscal management. According to Chhibber, there are three critical contexts in which to view the budget: a huge demographic dividend; how India has managed the global financial crisis; and how it deals with huge inequalities on both personal and regional levels. Despite these uncertainties and challenges, Chhibber gave the Budget "high marks."

Following Chhibber, Parag Saxena, CEO of New Silk Road Partners, argued that the Union Budget is less a proposal or a statement of accounts than it is a policy statement. He pointed out that the simplification of governance is what makes the economy grow faster and noted that education is critical. Saxena concluded that the 2010 Budget is a stable one for India.

In all, the panelists agreed that India can expect to be on the road to economic recovery. Achieving growth, however, will only be realistic when the challenges noted earlier are tackled and tangible fiscal consolidation gets underway.