Religions of the Silk Road 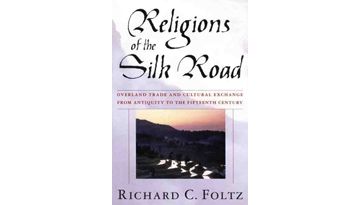 Richard C. Foltz is an Assistant Professor in the Department of Religion at the University of Florida. He is the author of several books and articles including Religions of the Silk Road, Mughal India and Central Asia, and Conversations with Emperor Jahangir. In addition to his expertise on religious traditions along the Silk Road, Professor Foltz's research interests include the intersection of Islam and ecology, as well as environmental ethics and the relationship between Iran and South Asia.

Asia Society spoke with the author in anticipation of his participation in the Asia Society and Museum's November 9--10, 2001 symposium "Nomads, Traders and Holy Men Along China's Silk Road".

Can you discuss the origins of the term Silk Road? When did the term arise and what geographic regions did it describe? Was the Silk Road ever a coherent path?

The term was coined by a German explorer, Ferdinand von Richtofen, during the late 19th century. He used it to refer to a loose network of pre-modern overland trade routes, which at their major points of activity during the Roman-Han and Mongol periods, stretched from the Mediterranean to East Asia. There is no evidence that pre-modern Asians conceived of this trade network in such a unified way.

Was there a lingua franca on the Silk Road?

During the ancient period the main lingua franca was Soghdian, an Iranian language which survives today in the Yaghnob valley of Tajikistan. In Islamic times the lingua franca became Persian.

There has been a lot of interest lately in Buddhism in Central Asia, mostly because of the destruction of Buddhist statues by the Taleban in Bamiyan. How strong was Buddhism in what is now Afghanistan and when did it die out?

The region that is now Afghanistan seems to have been mainly Buddhist on the eve of the Muslim conquests in the 7th century CE. Much of the Silk Road economy was in the hands of Buddhist traders and the monasteries they supported along the way, so they were the direct competitors of Muslim traders from the 7th century onwards. Of course, Qur'anic language condemning "idol-worshippers" provided ideological support to Muslims competing with Buddhists for economic advantages. One hears little or nothing about Buddhists in that area after the Mongol period.

Can you say a little about Chinggis Khan? Who was he and does the popular Western characterization of him hold any truth?

Chinggis was a highly charismatic Mongol chieftain who succeeded as had no one before in winning the personal loyalty of large numbers of Mongol and Turkic clans across Inner Asia. Seen against the backdrop of his own cultural system, he appears exceptional, but more in terms of this charismatic success than in terms of how Westerners have tended to judge him, such as "excessively violent, barbaric," or the like.

How did Islam spread on the Silk Road? What factors led to Islam becoming the dominant religion of the western half of the Silk Road?

This can mainly be attributed to the activities of Muslim merchants operating under the protection and favoritism of local Muslim rulers. An additional factor, especially in rural areas, was the missionary activity of Sufi preachers, who often competed successfully for the authority held by traditional shamans.

Are there any traces of Nestorianism and Manichaeism in Central Asia today? Were elements of these belief systems incorporated into other religions?

There are some archeological remains, and further east in China, perhaps some cultural survivals as well, such as something resembling baptism among some Inner Mongolian groups. A few years ago a functioning Manichaean shrine was found in southeastern coastal China, though locals believed it to be Buddhist.

While the Silk Road was obviously a two-way route, we often define the Silk Road as a movement eastward with Buddhism, Zoroastrianism, Judaism, and later, Islam, spreading east. Do you think this is an accurate categorization?

The movement seems largely to have been that of Westerners towards the East. Even such Chinese travelers as Xuanzang traveled for the purpose of bringing back foreign influences to China, and not the reverse. Obviously, non-Chinese traditions such as Buddhism and Islam were in some respects profoundly altered and reshaped to meet Chinese needs.

Can you give some examples of cultural exchange along the route? What kind of archaeological evidence is there to support this?

From ancient times, the Chinese seem to have acquired technologies such as wheeled transportation, forms of metallurgy, and so on from Western traders. The archaeological evidence, in this case, is that certain technologies appear at a given point in Chinese history at a highly developed stage, suggesting they were introduced from elsewhere rather than developed over time locally. Conversely, such technologies as paper production and gunpowder were transmitted later from China to the West. To cite another example, the influence of Chinese artistic traditions on those of Iran during the Mongol period is quite dramatic. In terms of belief systems, one notable example in Central Asia is the ancient Iranian New Year festival at the spring equinox, called No Ruz, which many Central Asian Muslims today consider to be an "Islamic" festival.

The Silk Road is often depicted as an incredible crossroads of ideas, religion, and art. Does the Silk Road conform to our modern concept of a pluralist, multicultural society?

Well, Silk Road towns were certainly multicultural. Whether it makes sense to project our modern values regarding that term onto pre-modern Asia, I couldn't say. No doubt pre-modern Asians saw things very differently from the way we do in many respects.