Building Bicycle Infrastructure in the U.S. and China 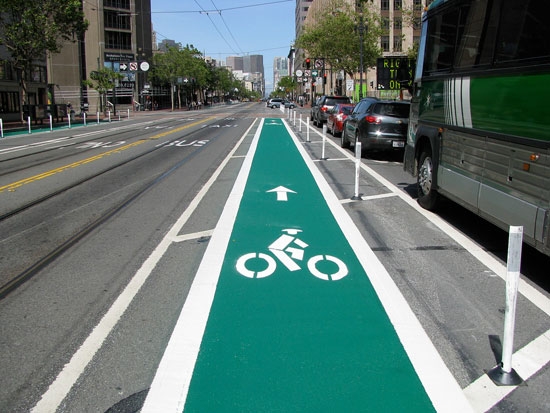 San Francisco, April 20, 2011 — Speaking over a backdrop of blaring rush-hour car horns in downtown San Francisco, a panel of experts met to discuss bicycle culture and policy in the U.S. and China before a diverse crowd of cyclists, environmentalists, and members of the Asia Society, San Francisco Bicycle Coalition, and the Sierra Club. Yan Xing of the UC Davis Institute of Transportation Studies, Timothy Pampandreou of the San Francisco Municipal Transit Agency, urban planning consultant Colin Hughes, and David Chiu of the San Francisco Board of Supervisors discussed common goals and challenges in the two countries as they work to promote urban bicycle use as part of a sustainable, multi-modal transportation strategy.

Even as the economy and car ownership have both been booming in China, an impressive 45% of local trips are still made by bike.  However, China’s major urban centers are beset by ever-growing challenges of traffic congestion, air pollution, and safety on the streets.

One of the biggest challenges today is the surging popularity of the automobile, as China pursues its own version of the California Dream. As Yan Xing observed, “As China continues through the modernizing process, there is more excitement in trying to turn two wheels into four.”

But don’t count China out. One surprising success story is the sprawling megacity of Guangzhou, which is working to bring China’s historical reliance on bikes into an urban present. As Colin Hughes points out, “in China, the past and the future are never that far apart.”

Hughes is optimistic after working directly with the Mayor of Guangzhou to build a 15-mile bike lane, extensive bike sharing program, and multi-tiered bike parking.  Just one year into the project, the results are impressive: a 50 percent increase in bike use and a reduction of annual CO2 emissions by 1,500 tons. Panelists agreed that Guangzhou is a ringing endorsement of the old adage “if you build it they will come.”

Turning the focus toward San Francisco, City Supervisor and avid cyclist David Chiu stated that the main challenges are policy and public awareness. Ironically, the California Environmental Quality Act, passed in 1970 to protect the environment, was hijacked by special interests to block bike lanes and related projects in San Francisco for years, despite the obvious environmental gains these projects promised. “Extensive public education and outreach” still needs to be a priority, Chiu said.

San Francisco still has a ways to go before it matches Amsterdam – or up–and-coming cities like Guangzhou – as a bicycle and public transit haven. Supervisor Chiu was even late to the event after his car got stuck in traffic!