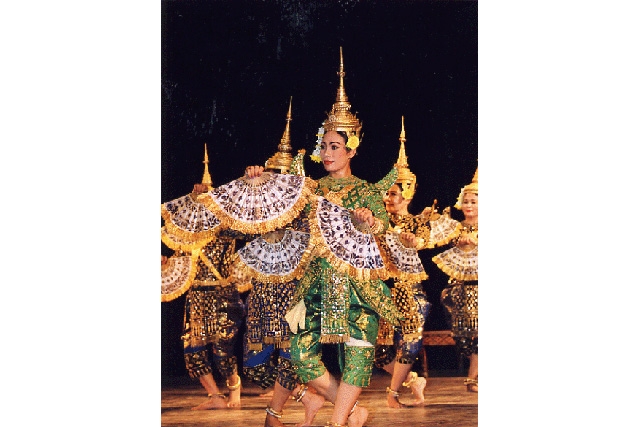 Proeung Chhieng is Artistic Director of Dance, the Spirit of Cambodia and the Vice Rector and Dean of Choreographic Arts at the Royal University of Fine Arts (RUFA) in Phnom Penh. Born in 1949, Mr. Chhieng trained from age seven in the role of Hanuman, the white monkey general in the Reamker and was a principal dancer with the Royal Cambodian Ballet. In North Korea on a scholarship when the Khmer Rouge assumed power in 1975, he chose to return to Cambodia and survived by hiding his identity. In 1979, he and surviving colleagues re-established RUFA as a central site for communications and education for the performing arts. Mr. Chhieng has created links to the refugee communities in Thailand, the USA and Europe and guided the efforts to rebuild a fragmented and largely undocumented repertory. During the last 20 years, he has organized performance tours throughout the world (including the last USA tour in 1990), arranged for foreign scholars to teach and carry out research, and represented Cambodia at a number of important international conferences, symposia and workshops, furthering his mission to communicate the meaning and importance of Cambodian dance. Mr. Chhieng is the co-director of the Cambodian Arts Mentorship Program, a teaching and documentation program administered by the Asian Cultural Council. He is senior consultant to the Japan Foundation-funded Dance Notation Project, and an advisor to Cambodia’s minister of culture. He received the John D. Rockefeller 3rd Award, of the Asian Cultural Council, for his significant contributions to the study, understanding and practice of Cambodia’s performing arts.

Are that dances that you perform entirely traditional or has there been some modern influence?

There are many different types of Cambodian dances that we have gathered together to create a dance repertoire. For the most part, in terms of the dances themselves, they are traditional. They are not influenced by outside. The part that is influenced by the outside is the context. What we use for the background, the setting, the lighting, shows some modern influence.

These dances were originally conceived for the royal court. In what setting are they usually performed today?

There are a lot of different programs where dancers are needed today. If they are called to perform by the royal family, they dance at the court or at the palace. If they’re asked to dance at a reception for an official diplomatic visit, the dances are performed in a hotel or a theater along the river. The general population can see us during holidays and festivals, where we perform in public gardens or in front of the palace. We perform at schools to educate other students about Cambodian culture and dance forms. We also travel to various provinces and perform for different villages.

How much of this tradition was lost during the Khmer Rouge? After the Khmer Rouge, how did the dancers find each other and how were schools reestablished?

First, the tradition that we now have is not the only one. There is the one that existed through the Angkor period and after the destruction of Angkor Wat, we lost that tradition. There are different meanings to the tradition, depending on the time period. Right now, we have a tradition, but it might not be the same thing as it was during the Angkor period. Especially during the Khmer Rouge regime, we lost a lot of the tradition. When it comes to passing the knowledge on to other students, Cambodian dance and music does not have the history of keeping paper documents. When the [dance] masters were executed by the Khmer Rouge, it was also the same as losing those documents because the artists were the documents. After the Khmer Rouge regime, the ten percent that survived worked very hard to get everything going again.

It was very difficult when the survivors came together and tried to revive the dance form again because the oral way of passing the knowledge was lost. The ten percent that survived had to rethink exactly what was involved in each dance and basically had to recreate the dance. They had to try to recall what movements made up the dances. It was very difficult and it took a lot of time. Therefore, in the last 20 years from 1979 to now, most of the dance forms are only partially revived. Some of them have been fully restored, but there are others that we can only partially remember; some are 80 percent restored, some 70 percent, some only 20 percent.

Are there efforts now to document what is going on now so something like that can never happen for future generations?

After this terrible experience [of surviving the Khmer Rouge], I came to the United States and met with Sam-Ang Sam and other cultural researchers who are trying to restore the dances and find some way to document them so they are not lost in the future. There are two ways they have been documenting the dances. The first way is through videotaping. When the teacher or the master is able to recall the movements and have the students reenact them, we videotape it. The second way is through writing. We have been writing down all of the movements and the songs accompanying them as well. There has been a mentoring project sponsored by the Rockefeller Foundation in which the mentors have recollected dance movements and music pieces. Once the dance and music masters come together and discuss and teach the younger students, they videotape those dances. Also the Toyota Foundation from Japan has encouraged the artists to write down everything that they know and to create pictures to match the writing. That includes both dance and music. Because of all of this, I hope that we will be able to have all of the documents in order to further the transmission of knowledge to our students.

What has this tour to the U.S. meant for your troupe? What impact will it have both in the U.S. and in Cambodia?

In this project, where all of these different foundations and groups are involved in sponsoring and supporting us, we do not want to perform just today. We want to use this as a basis for creating a closer relationship so we can work together on future projects. That’s the benefit of working with everyone, both Cambodians and non-Cambodians. On this tour, it benefits both sides, Cambodians and Americans, since both sides will be exposed to the other culture and create a closer relationship. The students from my school are able to learn about the American culture and forms of art and this will help in the relationship between the two communities. This entire tour will benefit me and my dancers because it has opened our eyes to so many different types of cultures. In New York, for example, we get to see different types of people, art forms, and cultures mingling together. I am very happy to be able to learn and be exposed to all of those cultures. A lot of the knowledge that I have gained is through my meetings with different artists at Jacob’s Pillow and this knowledge helps me to create new programs for the younger generation.

When most Americans think of Cambodia, they think of tragedy, war and poverty. Do you think this tour will give them a new perspective on Cambodia?

I agree. Ever since the Angkor period whenever people talk of Cambodia, including Cambodians, there’s always talk of war and people fighting, but never anything positive. I hope this tour will bring the positive message out to both Cambodians and non-Cambodians and show to them the powerful effect that culture and dance forms have. It is something that is embodied in Cambodian spirit and souls. There is a higher level that people need to be aware of. In terms of this tour, although some people may still think of Cambodia as a war-torn country, I hope this tour is the beginning of a cleansing process. A similar thing happened in 1999 in France when we went on tour. A lot of French people said the same thing about Cambodia’s negative image, but then when we went on tour it started to cleanse their image of Cambodia.

Right now there’s a real trend that has started that brings the students of dance together. And now people in general are looking at dance more seriously. The government is starting to think that dance is more important now. Some states look at dance as a type of entertainment or amusement, but I believe it’s the art and culture that makes up people’s souls and gives them strength. That is the beginning of making a country better. Dance is the strength of the people and the strength of the people makes up a nation. Many countries, including Cambodia, value the economy over the arts, but once that happens, the nation is broken. Without dance, people may be rich and prospering, but they’ve lost compassion. They’ve lost what it means to be sympathetic with other people. In society there is a social aspect and a cultural aspect and if the cultural aspect is not addressed, society is not whole. Dance creates and builds a strong conscience.