Does Hong Kong Have a Democratic Future? | Asia Society Skip to main content

Does Hong Kong Have a Democratic Future? 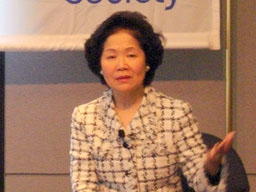 NEW YORK, May 9, 2008 - What form of democracy will Hong Kong’s future bring? A genuine democracy reflective of the people's will, or rather some form of "managed democracy?" And what will it take to get there? To present her vision of the roadmap to democracy in Hong Kong, the Honorable Anson Chan, member of Hong Kong's Legislative Council, spoke with Asia Society President Vishakha N. Desai.

Drawing on 39 years of public service in Hong Kong, Chan has been a longtime advocate of electoral reform, and she spoke passionately about the need to move towards "one man, one vote" when choosing both the chief executive and Legislative Council. Anything less, she argued, is inconsistent with the true definition of universal suffrage as enshrined in international human rights law. According to Chan, Hong Kong’s constitution, or Basic Law, provides the blueprint to move towards this future, and she urged its government to respect target dates for popular elections by 2017 and 2020.

Chan maintained that strong leadership and political courage will be crucial if Hong Kong's government is going to trust the public enough to engage it in a meaningful way. And only when real public participation takes place through the electoral process, she continued, will accountability, transparency, and good governance be protected.

Excerpt: "We might wake up and find... our rights and freedoms even more undermined" (2 min., 57 sec.)
Anson Chan defends her campaign for democratic reform against critics who accuse her of "upsetting the apple cart" when the economy is good.