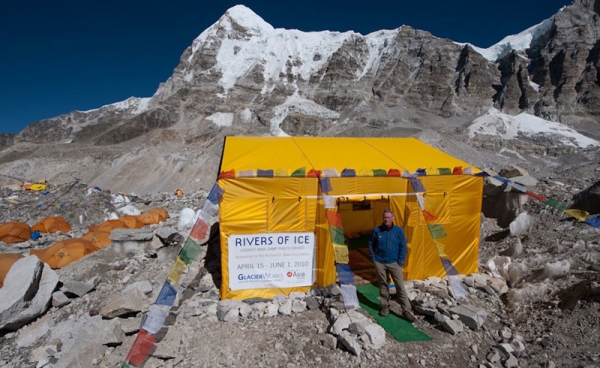 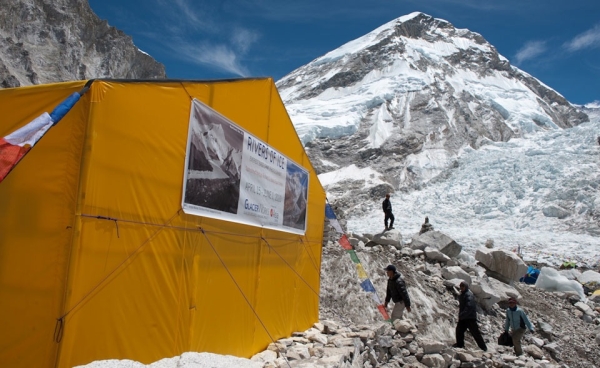 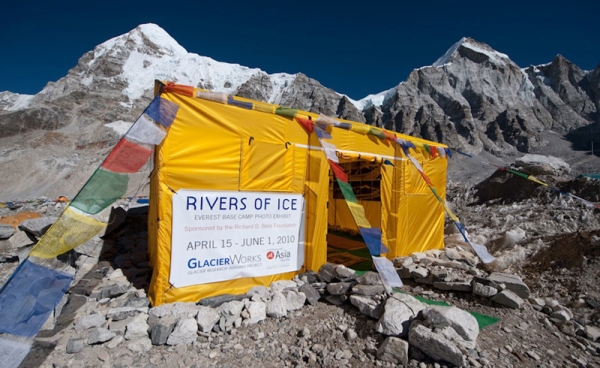 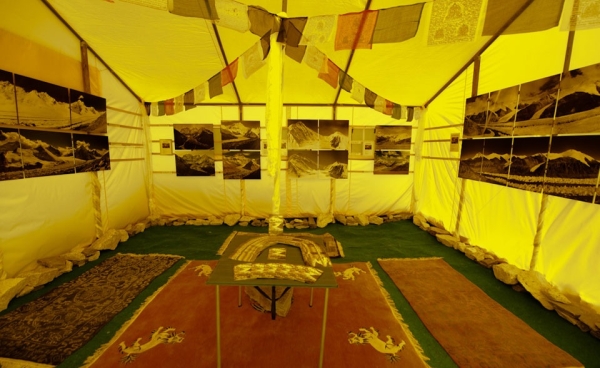 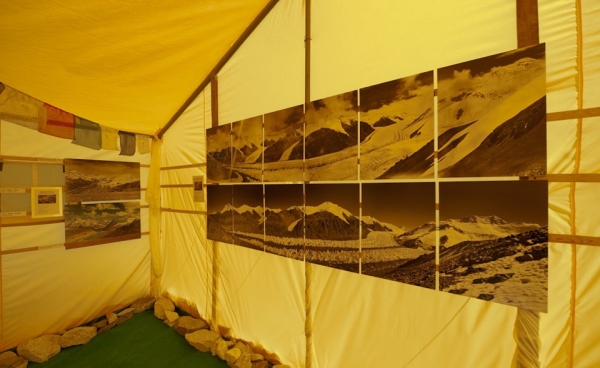 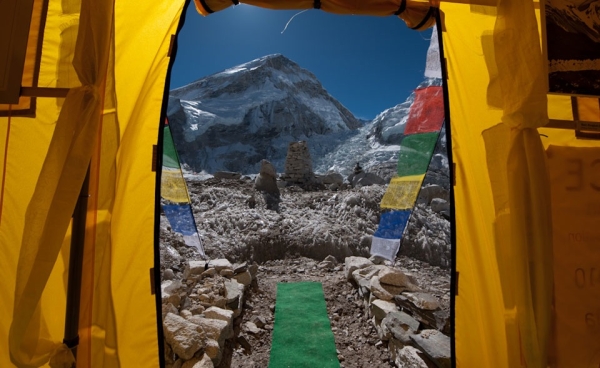 I arrived at Base Camp on April 11 after a seven-day trek. Our trek was comprised of ten local porters, two Sherpa camera assistants and Expedition Manager Lia Layton. We enjoyed good weather and spectacular mountain views along the way.

Upon arrival at Base Camp we paid the porters and bade them farewell as they wished to return down valley in pursuit of the next week's work, portering for Western trekkers and Mount Everest summit seekers. The following morning the GlacierWorks team examined and selected a sight for the Rivers of Ice photo exhibit tent. The platform for the large 17' x 16' tent would have to be laboriously and chopped from the rock-covered ice of the Khumbu Glacier, so work began after lunch in the Sherpa kitchen tent.

Two days later the platform was level and finished and we began the careful work of erecting the tent, hanging the prints and decorating the tent's interior and exterior. The tent's dimensions and the placement of all the prints had been skillfully designed and drawn up by Nerissa Cooney, GlacierWorks’ graphic designer, so we followed her plans, but all was not that simple. The work was more than anticipated but thankfully many Sherpas and Western climbers lent a hand. And although we had spent considerable time in the US thinking through the entire project a few things had slipped our minds and thoughtful jerry-rigging became the order of the day. We were pleased and relieved to see that the tent we had ordered built in Kathmandu, but did not see until Base Camp, was all that we had expected.

On April 14 the tent was finished and in the evening light we stood back and viewed our creation. We were thankful for the Richard D. Bass Foundation's sponsorship of the world's highest photo exhibit. We were a bit awestruck and proud to see the Rivers of Ice photo exhibit standing firm in the wind at Base Camp, with the mighty but rapidly melting Icefall rising up behind the yellow tent and Everest's 29,028 ft. summit looming somewhere behind.

The exhibit opening on April 15 was attended by many climbers, Sherpas and trekkers. It was a rare sunny afternoon and climbers and Sherpas, many whom had known each other for over twenty-five years, gathered to discuss the future of climbing in the Himalayan range and to reminisce. Most were surprised and a bit shocked to learn of the rapid glacier melt in the Mount Everest region and elsewhere in the Greater Himalaya. The route up the great mountain was changing, on that they all agreed.

The sun disappeared behind Pumori and the crowds wandered off to their dining tents, like the exhibit tent, all perched on glacier ice. I was the last to leave. I sat on a glacier boulder near the exhibit and watched as the last low rays of afternoon light brought shape and texture to the massive ice blocks of the Icefall, the route to the summit. I had first passed through that tangled, chaotic and slowly-moving river of ice in 1983 on my way the Earth's highest point. I was the 135th person to climb Mount Everest, now more than 4,000 people have reached that cherished place.

Much has changed since that day in May 1983 when I realized a long held deeply felt ambition and childhood dream. But it's not the crowds on Mount Everest's slopes or the small tent village erected every Spring at its base that have changed Everest's face the most. It's the ice, the rapidly melting ice of the world's highest mountain, on which I sit to write, that causes me to pause and ponder what this mountain's future, and the Himalayan range, will hold.

To document the dramatic loss of glacial mass in the frozen “water towers of Asia,” the GRIP team has deployed an unusual resource: archival photographs taken in the past century by the world’s greatest mountain photographers.  GRIP’s photographers have retraced the steps of these artistic pioneers and captured new images that precisely match the early photographic records.  The comparison starkly reveals the catastrophic loss of ice during the intervening years.

Photos from this project have appeared on display in Copenhagen and New Delhi, and are currently at Mount Everest Base Camp until June 1.  This summer, Asia Society Museum will host a selection of the photos, Rivers of Ice: Vanishing Glaciers of the Greater Himalaya, from July 13 through August 15.  To learn more about GRIP visit On Thinner Ice.