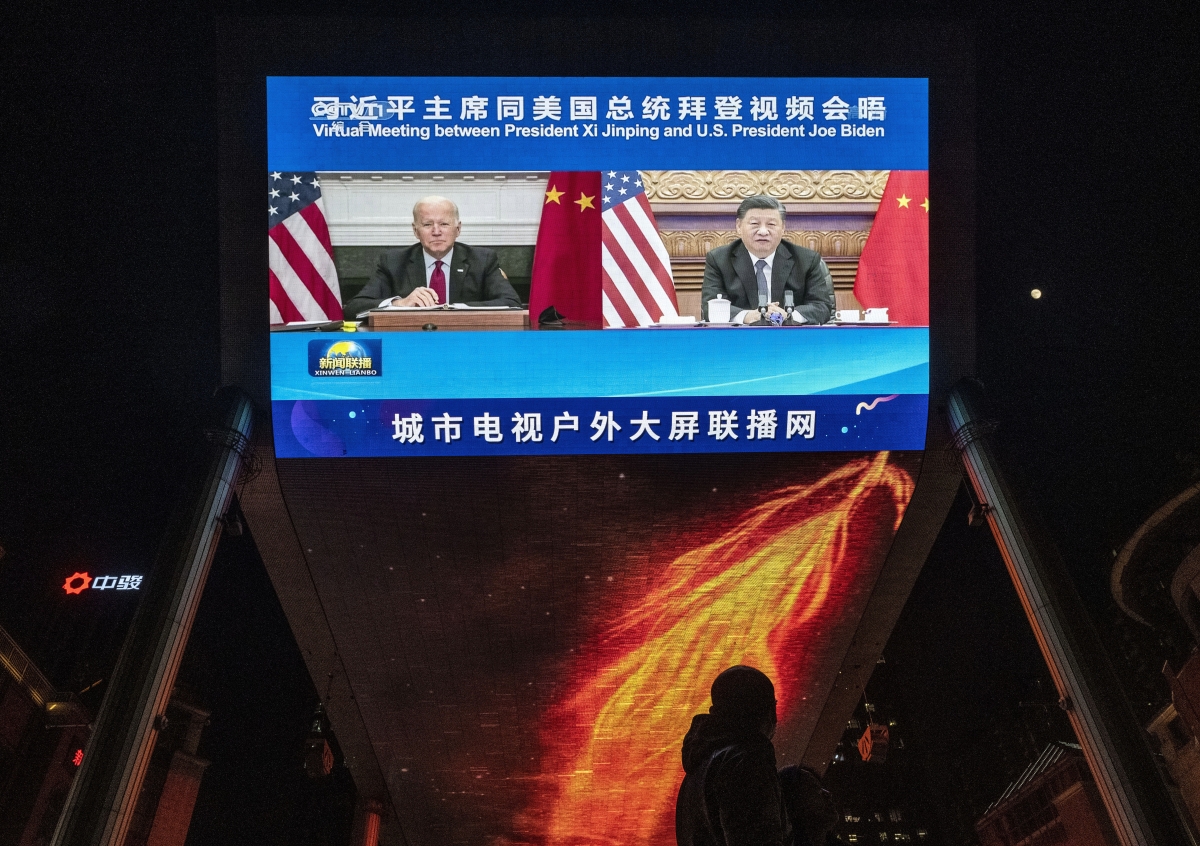 A large screen displays United States President Joe Biden, left, and China's President Xi Jinping during a virtual summit as people walk by during the evening CCTV news broadcast outside a shopping mall on November 16, 2021 in Beijing, China. (Photo by Kevin Frayer/Getty Images)

The following is an excerpt of ASPI Vice President for International Security and Diplomacy Daniel Russel’s op-ed originally published in Foreign Affairs.

It is no secret that the U.S.-Chinese relationship has entered dangerous and unstable territory. Chinese President Xi Jinping, recently elevated by the Sixth Party Plenum to the apex of socialist greatness (alongside Mao Zedong), sees the world in a turbulent state “unprecedented in the past century.” The East, in his view, is rising, whereas the West is in decline; China, Xi said, has “time and momentum on its side.” To take advantage of this favorable correlation of forces, he set aside the “hide and bide” caution of former Chinese leader Deng Xiaoping in favor of a far more assertive, competitive, and uncompromising international posture. Under the banner of “dual circulation,” Xi has doubled down on his quest for indigenous technology to reduce China’s dependence on the world while increasing the world’s reliance on China.

In the United States, meanwhile, President Joe Biden is operating in a political environment filled with bipartisan suspicion, frustration, and hostility toward China. He is grappling with the thankless trials of alliance cat herding as he tries to rally partners to push back against problematic Chinese behavior. He is contending with a worrisome host of new capabilities that Beijing is bringing online. The U.S. Department of Defense’s recently released “China Military Power Report,” for instance, projects that Beijing will acquire some 1,000 deliverable nuclear warheads by 2030 — more than double the Pentagon’s estimate just last year. This dramatic acceleration, plus the scale of China’s investment in nuclear “triad” delivery systems, hints at an unsettling shift from nuclear deterrence to nuclear warfighting capability.

A slew of other troubling problems weighs heavily on the U.S.-Chinese relationship. The United States is increasingly concerned about China’s Belt and Road Initiative, its export of surveillance technology, and its resumption of state-sponsored cybertheft of intellectual property. These concerns are layered on top of long-standing complaints about China’s unfair trade practices, treatment of minorities, intolerance of political expression, and bullying of its neighbors. Beijing also has a lengthy list of grievances, including Washington’s charge of genocide in Xinjiang, new U.S. sanctions and restrictions, past detention of the Huawei CFO Meng Wangzhou, robust military operations in the South China Sea, and escalating gestures of support for Taiwan.

It is in this fraught context that Biden and Xi announced plans to hold a “virtual summit” on November 15. News of the videoconference has elicited a mix of hopes and fears. It is the first face-to-face meeting between the two presidents, albeit a virtual one, and for some observers in the two countries and around the world, it represents a possible inflection point: an opportunity to shift relations between the United States and China to a cooperative footing. For others, particularly skeptics in the United States, the fear is that Biden will be duped into yet another round of bilateral dialogues that yields only empty promises and buys time for China to grow stronger.