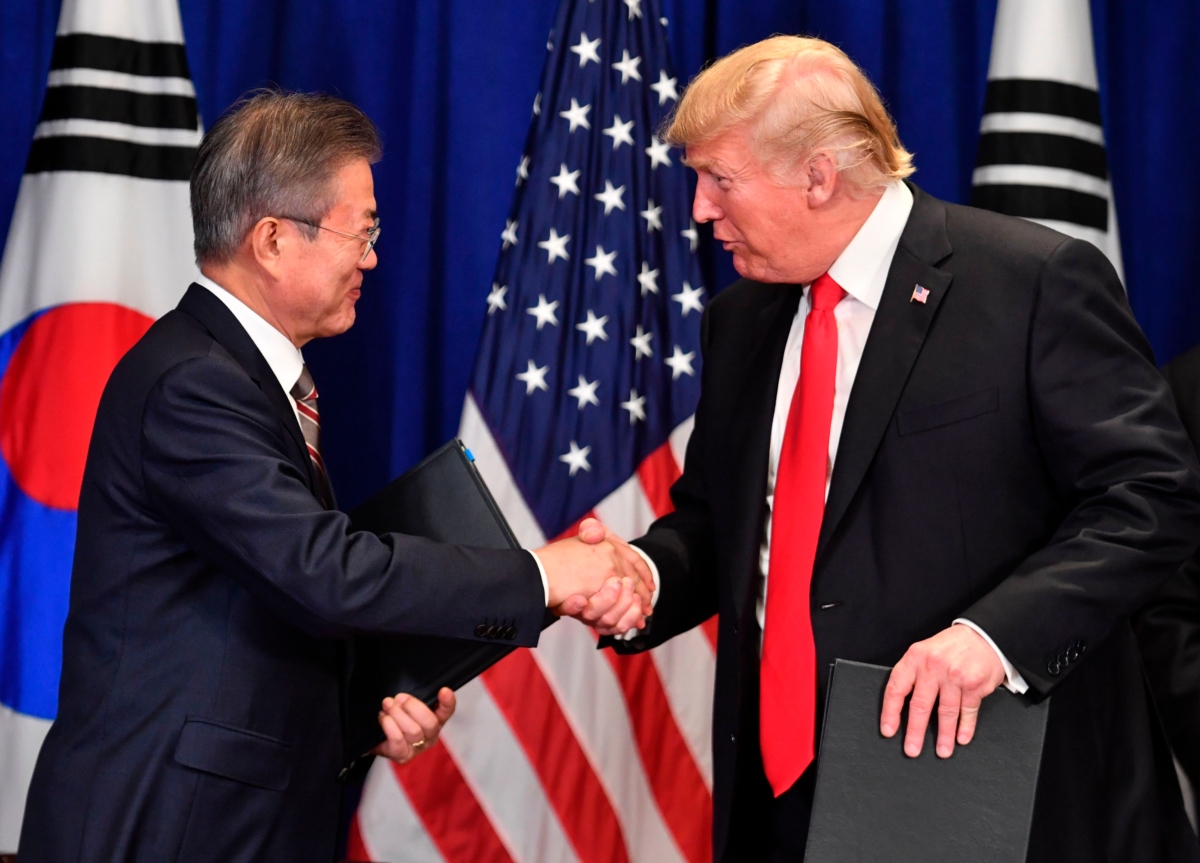 U.S. President Donald Trump (R) and South Korean President Moon Jae-in shake hands after signing a trade agreement at a bilateral meeting in New York on September 24, 2018, a day before the start of the General Debate of the 73rd session of the General Assembly. (Nicholas Kamm/AFP/Getty Images)

Last year, the United States and South Korea agreed to several key amendments to the U.S.-Korea Free Trade Agreement (KORUS), a breakthrough in the crucial economic relationship between the two countries. In a new issue paper published Wednesday by the Asia Society Policy Institute, Wendy Cutler, Asia Society Policy Institute vice president and veteran trade negotiator, and Hyemin Lee, visiting professor at the Graduate School of International Studies at Seoul National University, recommend a series of actions both countries could take to strengthen economic ties. The issue paper can be downloaded here.

Cutler discussed the report in a Q&A with Asia Society's Matt Schiavenza.

What makes the issue paper so timely?

The amendments to KORUS just went into effect at the end of 2018. Now that we’re starting a new year, it’s the perfect time to figure out how to expand our relationship.

The original KORUS agreement was negotiated by the Bush administration, then re-negotiated by the Obama administration, and now amended by the Trump administration. But I believe we’re at the point now where KORUS is as good as it’s going to get. For the first time in a long time, our trade relations with Korea seem to be on a steady path, so this is an opportune time for both countries to look at how they can strengthen their economic relationship and work on issues that go beyond the KORUS obligations.

And that’s what we tried to do in this issue paper: We put forward 19 suggestions of areas for future work, in the areas of trade and investment; digital and advanced technologies; energy; infrastructure; and women's economic empowerment.

What do the latest KORUS amendments do?

When President Trump came into office, he complained that KORUS was one of the worst trade deals ever negotiated. As a result, he directed his negotiators to improve the agreement, and that’s exactly what they sought to do. At the end of the day, however, the changes they actually made to KORUS were pretty modest, focusing mainly on improving market access for U.S. exports of autos and auto parts while also addressing a number of problem issues in the customs, pharmaceuticals, and other areas.

Overall, the amendments were limited. But nevertheless, the president felt that the agreement had been sufficiently improved and was quite praiseworthy of the amended agreement.

Do you think subsequent U.S. presidential administrations will want to re-negotiate KORUS? Or do you think it’ll stay more or less as it is?

I don't see that happening. But I do see opportunities for both countries to work together to further strengthen their economic relationship.

You discuss energy at length in the paper. What are the particular opportunities you see with South Korea and the United States to work together in this area?

Energy is an interesting area. South Korea is a net importer of energy, and the U.S. is now a net exporter of natural gas, so there’s an important opportunity to forge closer ties in this sector.

One of the recommendations in the paper is that the U.S. and Korea build the import and export infrastructure required for liquid natural gas (LNG) so more U.S. LNG exports to Korea can take place. That would not only strengthen the relationship in the energy sector but also bring down the bilateral trade deficit, which has been of concern to the administration with respect to Korea and with other countries.

One suggestion you make in the paper is that Korea joins the U.S. regarding trade concerns with China. Why has Seoul been more reticent than Washington in pushing China in that concern?

Korea, like a number of other countries, feels like it’s caught in the middle of this dispute with the two largest economies in the world. China is Korea’s largest trading partner and the United States is close behind, so it's very dependent on both markets. Like others, Korea has tried to walk a fine line and avoid taking sides.

That said, WTO rules do not sufficiently address the types of challenges, new practices, and policies China has pursued in recent years, including state-owned enterprises, industrial subsidies, and forced technology transfer.

The paper recommends that Korea support the work of the U.S., the European Union, and Japan on these issues since its companies are also feeling the effects of such practices and policies. Furthermore, as a country dependent on exports, Korea has benefitted from a strong multilateral trading system. It should work actively with others to update and improve the rules.

An interesting fact presented in your paper is that female labor participation in Korea is actually somewhat low. What can the two countries do together to improve female representation in the workplace in Korea?

This is an area where both sides could benefit from working together. It’s interesting that even though Korea’s female participation in the labor force is relatively low among OECD countries, when it comes to its maternity and child care policies, it’s pretty advanced — a lot more advanced than the U.S.

In short, both sides don’t have it completely right on women’s workforce issues, and by working together and exchanging experiences, and convening experts, I think both sides could benefit from learning about each other's successes and failures.