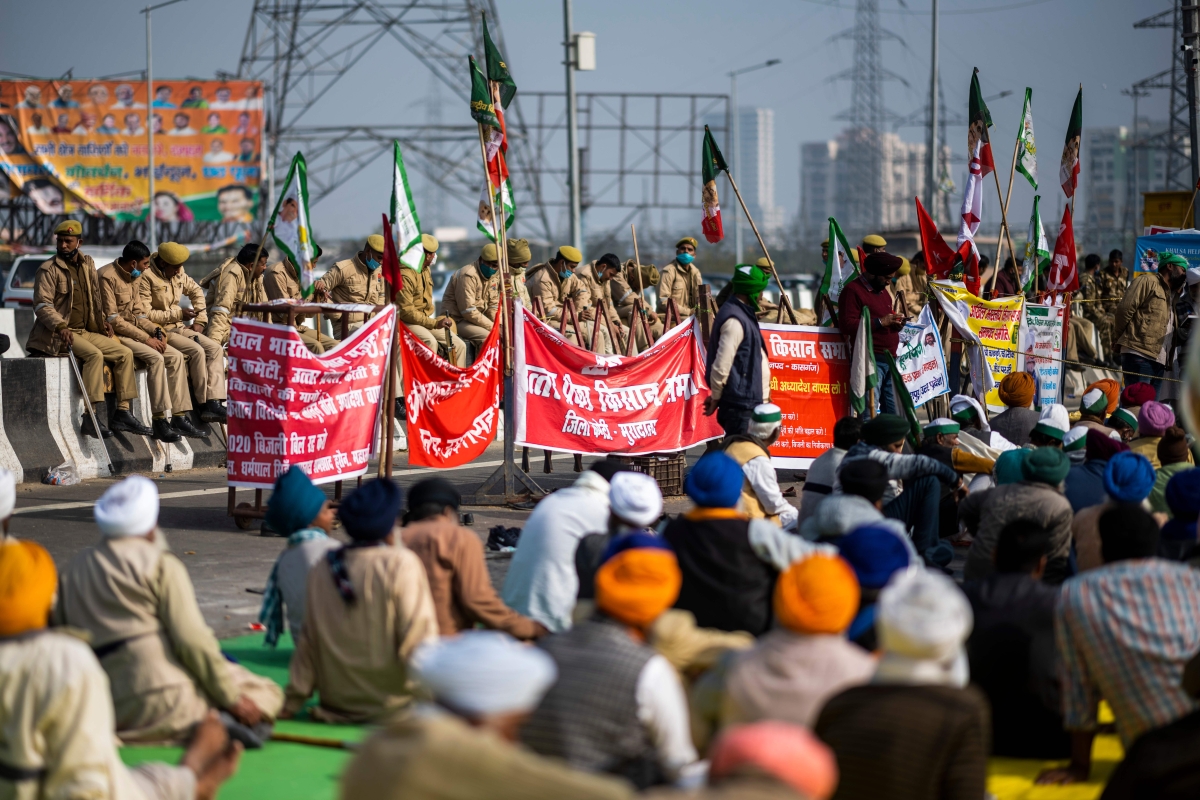 Farmers take part in a demonstration blocking a highway to protest against the recent agricultural reforms at the Delhi-Uttar Pradesh state border in Ghazipur on December 14, 2020. (Photo by Jewel Samad / AFP / Getty Images)

COVID-19 has severely damaged the Indian economy. The Modi government’s support packages have failed to prevent a broad-based economic decline. India is in economic recession after two successive quarterly contractions in GDP of -23.9 percent and -7.5 percent. As cases in India continue to rise, the prospects of a robust revival in economic growth appear uncertain, given structural problems with the Indian economy.

For some, the lower contraction in the second quarter has raised hopes of the economy returning to a positive GDP growth path earlier than expected. The Reserve Bank of India (RBI) feels ‘the economy is recuperating faster than anticipated’ and expects GDP growth to turn positive in the coming quarters. Overall though, it still expects GDP for FY2020 to contract by -7.5 percent.

Hopes of a faster-than-expected recovery are based on agriculture growing at a positive rate and manufacturing growth having turned positive in the last quarter. But an overall turnaround in GDP is unlikely, unless services, which comprise more than half of the economy, begin growing at positive rates. All major services are experiencing sharp contractions. Services vital to GDP growth and job creation, such as tourism, hospitality, transport (including civil aviation and railways), construction and real estate, would languish at suboptimal capacities as long as the pandemic persists.

COVID-19 hit India when it was already in economic slowdown, following deceleration in GDP growth for eight successive quarters. The slowdown was a result of disruptive economic policies like demonetisation of the Indian currency and a patchy roll-out of the Goods and Services Tax (GST). The poor health of Indian banks perpetuated the economy’s sluggishness. Today, Indian banks continue to bleed with bad loans affecting their ability to lend. The decision to defer outstanding loan payments following the cash crunch inflicted by the COVID-19 lockdown has only made the situation worse. This can restrict the kinds of investments required for kick-starting economic revival. Growth prospects could worsen if the decline in private consumption expenditure continues as a result of stagnating household incomes.

The Modi government hasn’t pursued reforms as aggressively as many thought it would. Early on, in its first term, it made unsuccessful attempts to amend a land acquisition law passed by its predecessor Manmohan Singh government, which prohibitively raised the cost of acquiring land by including resettlement and rehabilitation expenses in addition to a high floor on land prices. Introduction of the much-touted GST for ushering in a ‘common’ market in India marked the culmination of several years of work put in by previous governments. However, banks continue to suffer from making bad loans that have impacted profitability and long-term prospects. And the privatization of large state-owned undertakings like Air India, which are a huge burden on public finances, continue to remain unaddressed.

The COVID-19 crisis provided the government an opportunity to usher through reforms. It has done so by bringing in new agricultural marketing and labour laws. But the new farm laws have generated political backlash. Protests against the laws, led by wheat and paddy farmers from Punjab and Haryana, have grown in number and sympathy, acquiring troubling proportions for the government. Congress and some other opposition parties are backing the protests after sensing the political benefit of anointing the Modi government ‘anti-farmer’. The labelling has adverse implications for the ruling Bharatiya Janata Party (BJP) and its allies in the various upcoming state assembly elections.

The new farm laws dismantle established structures and entrenched interests by allowing farmers the choice to sell outside government regulated markets, marking a new activism in the government’s pursuit of economic reforms. Along with labour laws, these reflect a pro-market shift in the government’s outlook on economic management, which has, till now, focused mostly on expanding income support for various sections of the population through welfare schemes. The protests are testing the government’s resilience. If it capitulates to political pressure and agrees to repeal or significantly amend the new laws, it would be a further setback for reforms in India.

The government is expected to take up privatization of major public enterprises in the next round of reforms. But failure to hold on to the new farm laws can create obstacles for those efforts. The precedent of the Modi government buckling under sustained large-scale protests, could inspire other interest groups and opposition parties to resort to similar tactics to stall reforms.

The government needs to note why the labour laws, passed alongside the farm laws, haven’t generated as much protest. The former are a result of extensive consultations with various stakeholders over years. The farm laws, in contrast, were barely debated and discussed, and were hurriedly pushed through both Houses of Parliament in an abridged session. The hasty and non-consultative approach to passing these laws, notwithstanding their clear economic rationale, has backfired politically. This only reinforces the importance of having all stakeholders on board when implementing difficult reforms.

COVID-19 has propelled India on the mission of ‘Atmanirbhar Bharat’ or a self-reliant India. Besides reenergizing the Modi government’s flagship ‘Make in India’ initiative, this latest push for economic self-reliance has been accompanied by nationalist calls urging Indians to go ‘vocal for local’. This urge is driven by a desire to reduce economic dependency on imports, specifically those from China, with whom India’s relations are at a historical low, following violent border clashes in the high Himalayas in June 2020.

The vigorous push for going local cannot be consistent with an outward-oriented trade policy accommodating liberal market access for imports. Fears of being swamped by imports from China and Southeast Asia led India to pull out of the RCEP (Regional Comprehensive Economic Partnership) – the world’s largest mega trade deal, finalized in November 2020. The emphasis on self-reliance and enhancing domestic competitiveness has led to a policy mind-set skeptical of free trade agreements.

India’s scaling up of tariffs over the last few years to bolster ‘Make in India’ has given an import-substitution sheen to India’s trade engagement. At the same time, India is actively encouraging foreign investment in various sectors of the economy. These contradictory strands have cultivated an unusual external economic engagement narrative that encourages foreign capital while discouraging imports.

One of the ostensible objectives of this engagement strategy is attracting export-oriented foreign investment for boosting manufacturing exports. However, such investments usually prefer locations with low tariffs that enable easy sourcing of imports for producing exports. Therefore, these investments are unlikely to rush to India, notwithstanding pick-up in regional efforts to relocate major parts of industrial supply chains outside mainland China.

The recent rush of large investments in India (e.g. Facebook. Amazon, Walmart) focus on acquiring local business assets for deeper footholds in the large domestic market, essentially in telecom services and online retail. These domestic market-oriented investments are in contrast to export-oriented capital that is yet to flow fast into India.

The self-reliance initiative will not fetch foreign investments if it is viewed as a nationalist project for import-substitution. India must reach out to countries and regions with a genuine desire to engage on trade through structured rule-based agreements. It must also be willing to offer more market access concessions in areas it has traditionally defended in trade talks, like dairy, automobiles and data regulations. The spasmodic withdrawal from RCEP has dented India’s credibility as a committed actor in trade negotiations. It is imperative to correct the impression.

In order to achieve and maintain high rates of GDP growth, India must explore greater engagement in global trade. COVID-19 might facilitate that with India at the forefront of global vaccine production and poised to be exporting to the rest of the world. Notwithstanding this upside, the challenges for reviving the economy are daunting. The prospects would brighten if the Modi government can revitalize the investment climate by restoring the financial health of banks, adopting a more open trade policy, and persisting with reform. As the government is realizing from the ongoing protests, the latter are far tougher to sell politically than nationalist appeals of self-reliance. Barring progress on reforms, structural problems will hold back India’s economic prowess even after overcoming COVID-19.

Amitendu Palit is Senior Research Fellow and Research Lead (trade and economics) at the Institute of South Asian Studies in the National University of Singapore. The views are personal.