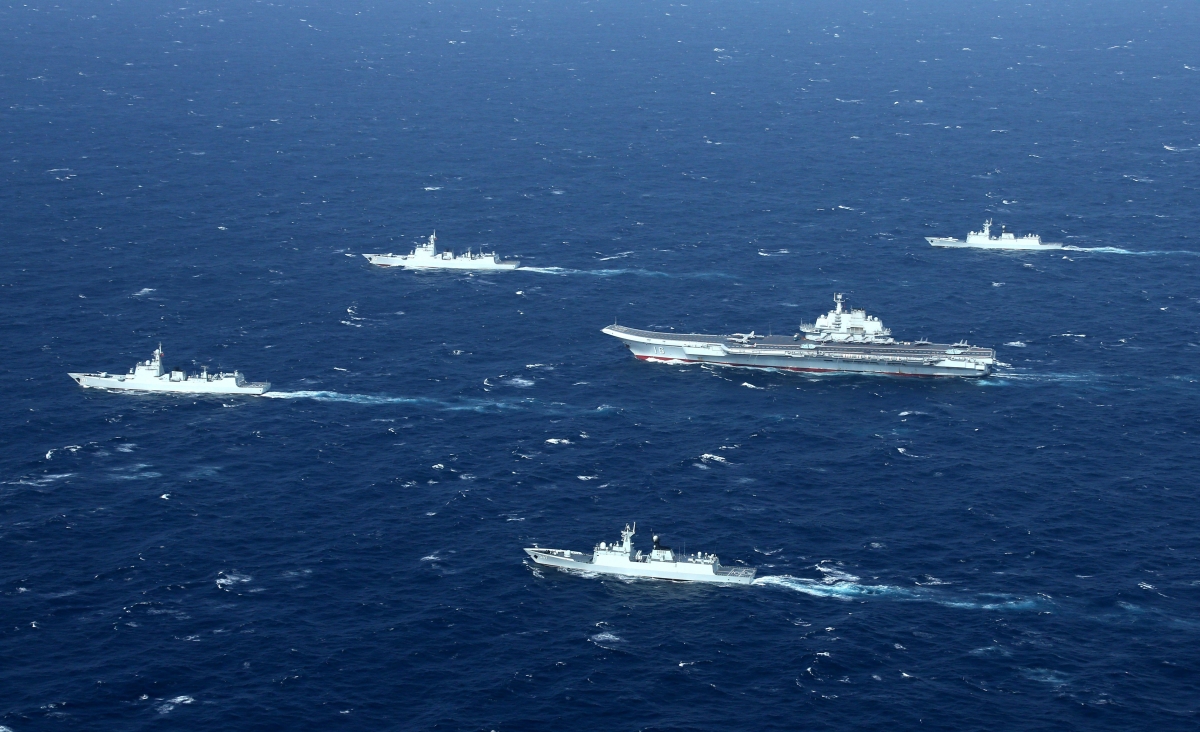 This aerial photo taken on January 2, 2017 shows a Chinese navy formation, including the aircraft carrier Liaoning (C), during military drills in the South China Sea. The aircraft carrier is one of the latest steps in the years-long build-up of China's military, as Beijing seeks greater global power to match its economic might and asserts itself more aggressively in its own backyard.

Following is ASPI's edited translation of an interview first published by the Yomiuri Shimbun, Japan's largest daily newspaper by circulation, and conducted by reporter Satoshi Kogawa.

In an interview with the Yomiuri Shimbun, Kevin Rudd, former Prime Minister of Australia, discussed the increasingly antagonistic U.S.-China relationship, voicing his strong concern that “accidental military clashes such as those on the South China Sea have an increasing likelihood of leading to conflict.”

Rudd, 61, who is skilled in Mandarin Chinese, is currently president of the Asia Society Policy Institute, where he works on issues related to U.S. defense, and U.S.-China relations.

In the interview, Rudd shared his understanding that the U.S. strategic relationship to China has “undergone a dramatic change from ‘strategic engagement’ to ‘strategic competition,’” and pointed out that “the existing state of the two countries’ relations is extremely brittle, and the ability of both governments to cooperate in case of an incident is declining.”

Rudd analyzes that in the background of this change in U.S. strategy is U.S. dissatisfaction with what it believes to be China’s unjust economic practice, and “a fundamental change in U.S. governmental authorities, members of Congress, and economists’ beliefs regarding China” as a result of President Xi Jinping’s reversal of democratization.

One way of understanding the United States’ and China’s diverging views, he says, is that “China thinks ‘the United States is frightened of China’s rise, and is doing whatever it can to halt that rise.’”

The Trump Administration is putting forth a strong policy approach towards China, Mr. Rudd said: “Through discussions with U.S. government officials, Members of Congress, and businesspeople, I have found that views toward China have fundamentally changed. This is not a mere shift, but a major turning point.”

Rudd listed the reasons for this turning point:

"The economic world which until now has supported a ‘strategic involvement’ policy has also changed,” Rudd said.

Regarding China’s logic, Rudd said, “China currently feels that the U.S. is trying to ‘entrap China.’ China thinks the U.S. is frightened of China’s rise, and is doing whatever it can to halt that rise.”

Regarding the potential for a U.S.-China confrontation to develop into war, he said: “The rules (for dealing with problems) in the era of strategic competition have not been established. Within that frame, the risk of accidental military conflict such as that on the South China Sea is rising, as is the likelihood of it leading to conflict. If U.S.-China relations were looking positive, the countries would be able to overcome a potential incident, but the foundation of the two countries’ relations is so brittle that even the ability of both governments to cooperate in case of an incident is declining.”

Regarding the easing of U.S.-China tensions, Rudd said: “It is necessary to explore the idea of partial competition and partial involvement. We must communicate on areas of cooperation, starting from the simple things and working our way gradually up, committing time to building trust.”

Regarding Japan, Rudd said: “As long as the future of U.S.-China relations remain unclear, it would be wise for Prime Minister Abe to improve China-Japan relations, and maintain flexibility for potential changes.”