State of Play for Trade With Rep. Joaquin Castro

Wendy Cutler on The Diplomatic Cable 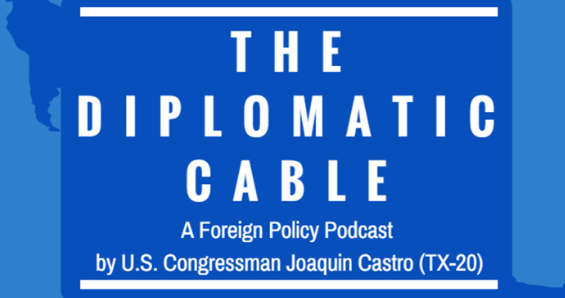 Rep. Castro begins with the question, “10 years ago, what did you think would be the most significant challenge for the United States of America.” Pointing to its economic and demographic trends, Cutler says that even a decade ago, it was clear that China was an emerging power. Cutler notes the issues with China’s Belt and Road Initiative (BRI), including its reliance on debt and state-owned enterprises which have increasingly drawn criticism. “[The BRI] is a really mixed picture. A number of countries are beginning to realize that this is a debt trap.” In trade, she highlights that despite the U.S. withdrawal from the TPP, the remaining countries managed to push forward with an agreement under the CPTPP, leaving “many of the rules based on U.S. proposals are [sic] alive and well in the region.” While U.S. exporters are now losing out among those CPTPP countries, she notes that the similarly strong provisions in the U.S.-Canada-Mexico Agreement (USMCA) could “pave the way for the U.S. at some point coming back to something like the TPP.”

Cutler points to other opportunities for the U.S. to stay engaged in the region, including with India and Southeast Asia. The former, she says “is really the country to watch, as the growth rates in India are significantly higher than China.” At the same time, many countries in Southeast Asia, particularly Vietnam, are benefiting from the U.S.-China trade war as companies move there rather than back to the U.S., leading to an increase in the U.S. bilateral trade deficit with Vietnam. As the Trump administration begins “upping the heat with Vietnam,” Cutler says, “they’re a close partner, and I would hope that we would find a way to simmer and trade disputes with them.”

Listen to the full interview on iTunes, Spotify, and Google Play.